You are at:Home»Human Rights»Discrimination»Canada has moral disaster on its hands if it does not deal with Taliban 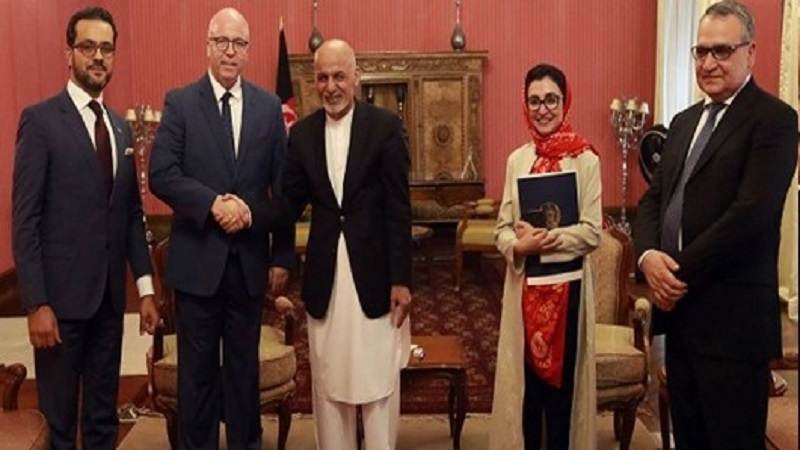 By Ali Mirzad on August 4, 2018 0 Comments
(image Caption: François Rivest, the Canadian ambassador to Kabul, Afghanistan, shakes hands with Afghan President Ashraf in 2017. Photograph courtesy of Global Affairs Canada)
Share this story
Ever since the world shifted its attention to Saddam’s Iraq, Assad’s Syria, the ongoing U.S.-Iran feud—and Canada abandoned a mission in Afghanistan in which it had invested millions and Canadians had sacrificed their lives—Afghanistan has devolved into a virtual hell.
Roméo Dallaire, former Senator and head of the UN peacekeeping mission in Rwanda, once said: “I know there is a God because in Rwanda I shook hands with the devil. I have seen him, I have smelled him and I have touched him. I know the devil exists…”

One wonders if François Rivest, the Canadian ambassador to Kabul, felt the same way as he shook the hands of Ashraf Ghani, Afghanistan’s ethno-bureaucrat .

Ever since the world shifted its attention to Saddam’s Iraq, Assad’s Syria, the ongoing U.S.-Iran feud—and Canada abandoned a mission in Afghanistan in which it had invested millions and Canadians had sacrificed their lives—Afghanistan has devolved into a virtual hell.

On June 7, 2018, to everyone’s horror and dismay, the Kabul regime announced, on national television, an unconditional ceasefire with the Taliban.

For Canadians this should be disconcerting. After all, we were among the first ones to take the fight to the Taliban in an effort to free Afghanistan from that plague.

When U.S. President Donald Trump stated in his long-awaited Afghanistan speech on his administration’s strategy in August 2017, that there were more recognized terrorist groups active in and around Pakistan than anywhere else on the planet, Chris Alexander, Canada’s first resident ambassador in Afghanistan, reciprocated, in saying Canada “was one of the first NATO allies to list the Taliban as terrorists.”

On June 27, when Dr. Latif Pedram, a Tajik MP, stood in Parliament in defence of the persecuted Hazaras, members of a Shiite minority group, he was promptly attacked by a mob of pro-regime representatives. The confrontation erupted after Dr. Pedram exposed the regime’s unconstitutional decision of dividing the province of Ghazni into three electoral constituencies, declaring that it was acting biased in order to save more seats for pro-Taliban Pashtuns.

With a population of more than 36 million, spread over 34 provinces, Afghanistan has many provinces with a high portion of Pashtun-speaking citizens, many of whom loathe the regime and its divisive tactics. The problem isn’t the Pashtuns as a whole, but a pro-Taliban regime, with the backing of Pakistani intelligence and with elements of ex-Khad officers—KGB offspring who served during the Soviet occupation of Afghanistan—such as Hanif Atmar.

The regime brought back suspected war criminal, Gulbuddin Hekmatyar, also nicknamed “the butcher of Kabul.” Through a signed agreement, Hekmatyar and his army of bandits—who, according to Human Rights Watch, have committed unspeakable atrocities —were allowed to return to Afghanistan from their Pakistani hideouts, given millions of dollars, and guaranteed immunity for all past crimes.

In fact, many of Hekmatyar’s men who were previously held in Kandahar prisons have, since their release, re-engaged in daily attacks against the people of that province according to General Abdul Raziq, police chief of Kandahar.

With a pro-Taliban regime in power, and allegations of corruption and lawlessness, Canadians should be aware that tax dollars being sent to Afghanistan may be paying for Hekmatyar’s lavish lifestyle and projects that could incite terror.

With more than 1,692 civilian deaths and 3,430 injured, the UN Assistance Mission in Afghanistan (UNAMA) reports that, in the first six months of 2018, there have been more killings than at any comparable time over the last 10 years since figures have been recorded. The brunt of the attacks perpetrated against defenseless minorities, including the July 1 attack on the Sikh community of Jalalabad, Afghanistan, where more than 19 individuals lost their lives. Among the many that perished that day was Awtar Singh Khalsa, the only Sikh candidate running in the upcoming October parliamentary elections.

In May, the regime unilaterally implemented a national-identification card system, through which Afghanistan’s more than 13 ethnic groups have to identify as “Afghan,” a term that is historically referenced to Pashtuns only.

Many high-ranking regime officials such as Gen. Taqat, a former intelligence chief, have openly stated that anyone objecting to being called Afghan is simply a fatherless bastard and, if they wish to remain in Afghan-land, they must formally apply for a legal status.

As a result of the June ceasefire, thousands of Taliban fighters swept across major cities, pillaging all territories previously under the protection of the army and killing scores of young men in uniform amid the ceasefire.

Just weeks ago, speaking at the Deutsche Welle Global Media Forum 2018, Ghani’s predecessor, Hamid Karzai, reaffirmed an earlier finding reported by the BBC in late January 2018, according to which 70 per cent of Afghanistan is under Taliban control.

The regime has methodically sidelined any individuals or groups that opposed their Taliban strategy. The arrest of Nizamuddin Qaisari, the Faryab provincial police chief, who successfully fought to keep the Taliban from overrunning his jurisdiction, was one of many examples.

In early July 2018, security forces believed to be Taliban loyalists, dressed in military camouflage, appeared to have been dispatched to address the Qiasari issue.  Images of a severely injured Qaisari and the lifeless bodies of his officers being trampled upon by savage men laughing hysterically, surfaced on social media hours later. It resulted in nationwide protests, which called for his immediate release and the return of exiled General Abdul Rashid Dostum, a powerful Uzbek leader and the country’s first vice-president, who has been accused of human rights abuses and kidnapping his political rival.

According to the New York Times, the video could not be verified for its authenticity. Afghanistan’s department of defence sought to distance itself from the attacks, stating that there were no orders from senior officials to attack.

Though Gen. Dostum was allowed to return to Afghanistan on July 22—ending his 14-month long exile— it remains to be seen, whether his return is yet another trap or the regime’s response to the post-Qaisari mass protests that had rocked the nation.

While Afghanistan sinks deeper into the dark abyss of multi-ethnic chaos, the Trudeau government appears to have decided it will ignore a mess that wasn’t their problem in the first place.

Yet, Canadians send Afghanistan an annual aid package of $150-million over three years.

The question is how will this government honour the sacrifices of the many Canadians who fought to keep the Taliban out of politics. How will it safeguard the ideals that men such as Dallaire stood firm in defending?