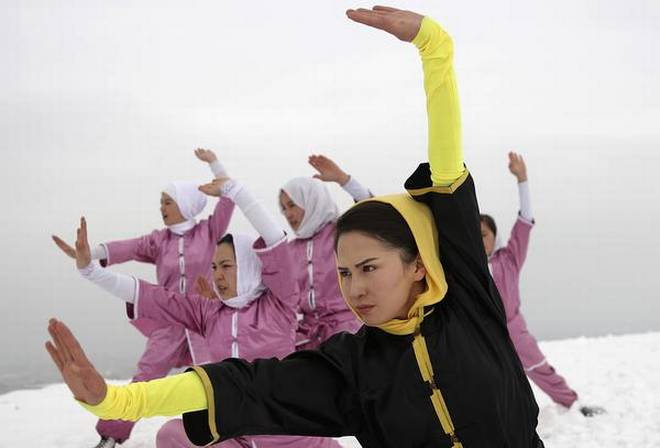 While Afghanistan’s Buddhists were carving the giant sandstone statues in Bamiyan in 500 A.D., Buddhists in China were creating martial arts in the Shaolin temple in Henan Province.

Fifteen hundred years later, 10 ethnic Hazara women and girls practice the martial arts of Shaolin on a hilltop in the west of Kabul. They are preparing for the day that Afghanistan can send its women’s team to the Shaolin world championship in China.

Sima Azimi (20), who is originally from Jaghuri in central Afghanistan, trains nine students in the martial arts to prepare for Olympic competition, but also to protect themselves on the streets of Kabul, where women are routinely harassed. Ms. Azimi remembered an incident in which a thief tried to snatch her purse, but with her martial arts skills she fought back and saved it.

Raihana Amiri, also 20, hopes to participate in international Shaolin competitions and bring honour and pride to Afghanistan, which is battered by decades of war.

When they aren’t training on the snow-covered hills that surround Kabul, Ms. Azimi trains her students in a grungy, dark club financed by a young cinema actor. She said it was difficult to find all the tools needed to train. For instance, she had to order a Shaolin sword from Iran, where she had studied the art for three years. They could not find Shaolin uniforms, but, undeterred, they designed and ordered uniforms made by a Kabul tailor.

While studying in Iran, Ms. Azimi competed in two competitions where she won gold and bronze medals. A year after returning to Afghanistan, she decided to train young girls who lived in the Hazara-dominated neighbourhoods of the capital.

The best part: it is affordable

Most of her students are teenagers, while a few of the older students study in universities. Ms. Azimi charges between $2 and $5 a month depending on what they can afford.

“Some of my students’ families had problems accepting their girls studying Wushu [martial arts]),” she said. “But I went to their home and talked to their parents.”

In religiously-conservative Afghanistan, girls are often discouraged from aggressive sports. Many parents fear a sporting accident could result in a girl breaking her hymen before marriage, which is considered deeply shameful.

On a par with boys

While strides have been made for women in Afghanistan, Ms. Azimi said there’s still much to change. She firmly believes that girls and women can stand toe-to-toe with boys in Shaolin martial arts. In an Olympic Committee competition in Kabul, Ms. Azimi took first position among female Shaolin participants.