You are at:Home»News»Voice for Hazaras Laments Lost Chances in Afghanistan’s Tumult 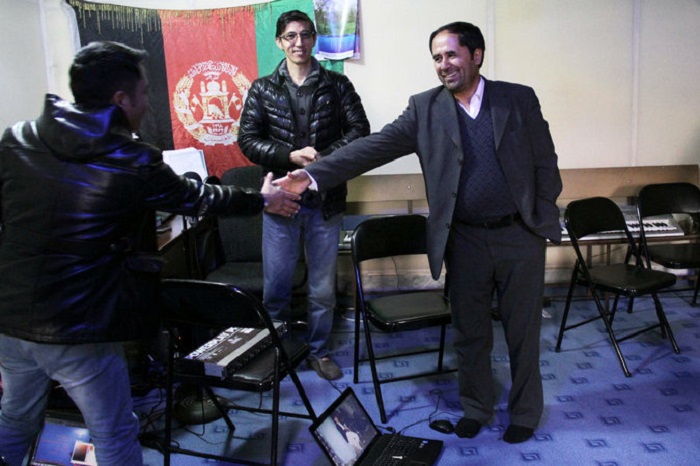 “The government is not in control of anything.” AZIZULLAH ROYESH Credit Haroon Sabawoon/Anadolu Agency, via Getty Images

KABUL, Afghanistan — AFTER his return to Afghanistan from exile, in 1986, Azizullah Royesh immediately became a tireless advocate of education as a bridge over the divisions that have made his country a battleground for decades.

Mr. Royesh has been hailed at home and internationally for his work at Marefat High School, his innovative school where girls make up almost half of the student population. He champions schooling as a way into the professional and governing class for Afghan minorities — and particularly for his fellow Hazaras, a mostly Shiite ethnic minority that suffered heavily under the Taliban regime.

But on a recent chilly day, sitting in his office at the school, Mr. Royesh had the resumed persecution of his people on his mind. The man who found his calling after returning to Afghanistan was reluctantly admitting that he understood the fear driving tens of thousands of Hazaras — and many other Afghans — to flee the country.

“The Hazaras feel themselves defenseless against the threat facing them,” Mr. Royesh said, pointing to the recent beheadings in the southern province of Zabul of seven Shiite Hazaras, including a 9-year-old girl, by militants linked to the Islamic State. In many other places, the Taliban, the Hazaras’ old nemesis, are resurgent, gaining territory by the week.

“The government is not in control of anything,” added Mr. Royesh, 46. “Others feel the same fear, but the Hazaras aren’t protected by anyone. The only way out is to flee the country.”

For Afghans who lived through so many phases of conflict — the Soviet invasion, a civil war, the Taliban government — the insurgency’s vast territorial gains over the past year, along with the rise of the Islamic State, have felt like the resumption of an old nightmare.

Musing on how it all came to this, after years of hope for a new way, Mr. Royesh expressed regret and anger over missed opportunities.

“The new Afghanistan needed a new system of values, and that couldn’t be achieved without an education to instill democratic ideals,” Mr. Royesh said. “If, in 2001 and 2002, we had focused on a revised education system based on democracy and human rights, we’d have a completely different context here today.”

“We now have literate people, we have educated people,” he added. “But very few of them are really equipped with a democratic mind-set. Civic education was the missing link.”

Mr. Royesh was not speaking as a political outsider — more than most, he has become invested in the Western-backed civilian government. In the election in 2014, he was an early supporter of President Ashraf Ghani, writing his election manifesto and campaigning on his behalf with the expectation that he would be named chief of staff if Mr. Ghani were elected.

But relations soured as the election neared, and he declined to support Mr. Ghani. Now, he accuses the president of proving ineffective in crisis, and of contributing to ethnic and factional divisions in Afghanistan.

MR. ROYESH has received international recognition for his work, including numerous awards and fellowships. He was a finalist in 2015 for the Global Teacher prize, an award given by the Varkey Foundation.

Not bad for someone who never got beyond the fifth grade. The Soviet invasion in 1979 ended Mr. Royesh’s formal education when he was 10 years old. His father sent him to Quetta, Pakistan, in 1982 to escape deadly Russian airstrikes on the family’s home village, Talkhak — which means “bitter.”

Mr. Royesh had no family in Quetta to rely on, he said, so he worked — in tailor shops, bakeries, small factories — “just to nourish myself.”

Such a childhood sounds fraught, but Mr. Royesh said he looks back on it with pleasure, noting that he encountered many Afghan intellectuals who had fled the Soviets. He was able to explore the new bookstores that were popping up in Quetta, an introduction to a rich life of the mind.

“It was precious,” he recalled. “It was a golden time.”

Mr. Royesh said that he read the literature of resistance and freedom: Steinbeck, Che Guevara, Gorky, Howard Fast (author of “Spartacus”). He was also intoxicated by the strong current of leftist thought unleashed by the Iranian revolution, including the works of Ali Shariati, whose writings have drawn comparisons to the Latin American liberation theology movement.

“That gave me a liberal-minded approach to interpreting Islam, as well,” he said.

Mr. Royesh returned to Afghanistan in 1986 and was immediately drafted by his community to share his learning. “I was one of the few literate people in my village, so I started to teach the other kids,” he said.

The Hazaras are known for their belief in the value of education, and there was strong local support for his efforts. Eventually, he helped open five schools, providing primary education for thousands of children.

IN person, Mr. Royesh comes across as formidably intelligent, if a bit bookish and shy. His academic formality drains away quickly once he gets going, though, and he converses comfortably in English, in addition to the main languages of Afghanistan — Dari and Pashto — and Urdu.

After the Taliban government was overthrown in 2001, Mr. Royesh moved from Ghazni Province to Kabul to open Marefat High School.

After years in which the Taliban had completely marginalized women in public life, he found considerable success in urging parents to send their daughters to his school. Today, about 44 percent of the more than 3,000 students at Marefat are girls. In fact, classes initially were coeducational, something unheard-of in Afghanistan. That changed in 2006, when the national Ministry of Education insisted that boys and girls be segregated as a condition of accreditation.

Marefat follows a secular curriculum, and girls and boys interact on the student council, in the student Parliament and clubs. Girls wear head scarves not because they are part of a compulsory dress code, Mr. Royesh said, “but because of their respect to the culture of the community.”

In 2009, those girls took a very public role opposing a law to give Shiite clerics control over the administration of family law for Shiite Muslims, which they derided as being deeply misogynistic. “The clerics were furious, and accused us of teaching Christianity and anti-Islamic values,” he said. “They sent a mob to attack the school, to burn the school. They called for my execution.”

“Fortunately,” he added, “the Interior Ministry sent the special forces.”

In 2012, Marefat was again attacked, accused of being pagan and anti-Islamic. The national council of clerics issued a fatwa attacking it, and the Ministry of Education responded by demanding that Mr. Royesh’s civic education courses be dropped. But the National Endowment for Democracy agreed to give money to establish Marefat Radio, which broadcasts the course content for four hours a day.

Mr. Royesh’s relationship with Mr. Ghani has worsened after the killing of the seven Hazaras. He helped organize a protest in which tens of thousands of mostly peaceful demonstrators descended on the presidential palace on Nov. 11, 2015, carrying the coffins of the victims. Some were met with gunfire when they tried to enter the grounds, though no one was killed, he said.

Since then, though, resignation has been outpacing defiance, and Mr. Royesh said he knows hundreds of high school and university students who have given up and joined the migration trail.

Losing educated young people “is a disaster for Afghanistan,” he said. “But don’t call me a pessimist; I’m optimistic still.”

“I’m happy with the things that have emerged in the new Afghanistan,” he added. “We have to protect our achievements, and the international community has to support them, protect them. The work is not done.”