You are at:Home»Refugees»‘If I’m not accepted as a refugee I’ll die in Afghanistan’ 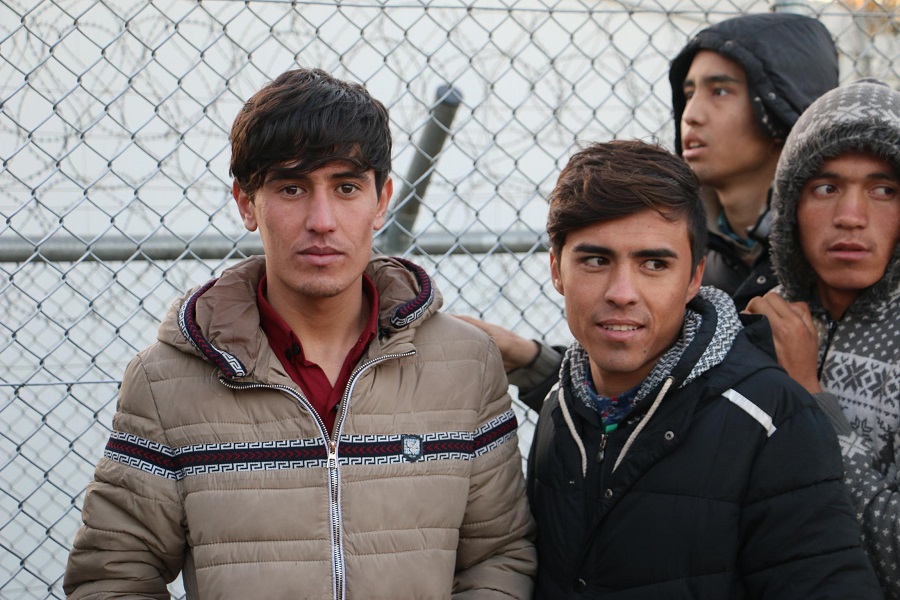 Darya, from Herat, Afghanistan, photographed at an informal encampment on the Greek island of Lesbos.

A month ago, Darya had never been anywhere near the sea. But when he decided to leave Afghanistan for Europe, he had to cross one.

He left because it was not safe to stay. Darya is Hazara, a minority group that has long been persecuted in Afghanistan. As Shia Muslims, they are particular targets of the extremist Sunni Taliban.

“Security in Afghanistan is not good for anyone,” least of all the Hazara, says Darya.

A little over a month ago, just after Darya left Herat province, a young girl and her father were pulled off of a public bus there by Taliban militants and beheaded by the side of the road, simply for being Hazara, he says. Darya read about it on Facebook.

There’s another reason that he and his family were under threat. Darya has two uncles in the Afghan National Army who are also targeted by the Taliban.

More from this series: This man walked out of Syria in the middle of a war, twice

When his two uncles come home on leave they stay inside the house because they are afraid that someone will kill them. Darya himself is in danger because people know he has family in the army. “Some people go [to join the army]for the money,” he says, despite the risks, “because there is no work in Afghanistan.”

Darya is traveling with his cousin; his sister and her husband and their two children, ages 3 years old and eight months; and his brother-in-law’s brother.

They traveled from Herat to Pakistan, then traversed Pakistan in two days by car. But for much of the journey, which took over a month, Darya and his family walked.

After Pakistan they arrived at the Iranian border. They went around the checkpoint on foot to avoid detection. Iran’s ancient cities flashed before his eyes: Khash, Zaidan, Shiraz, Isfahan, and finally Tehran.

“Isfahan was beautiful,” Darya says, though he only saw it from the road. “It was such a clean city with grass and trees. We were only there for ten minutes.” 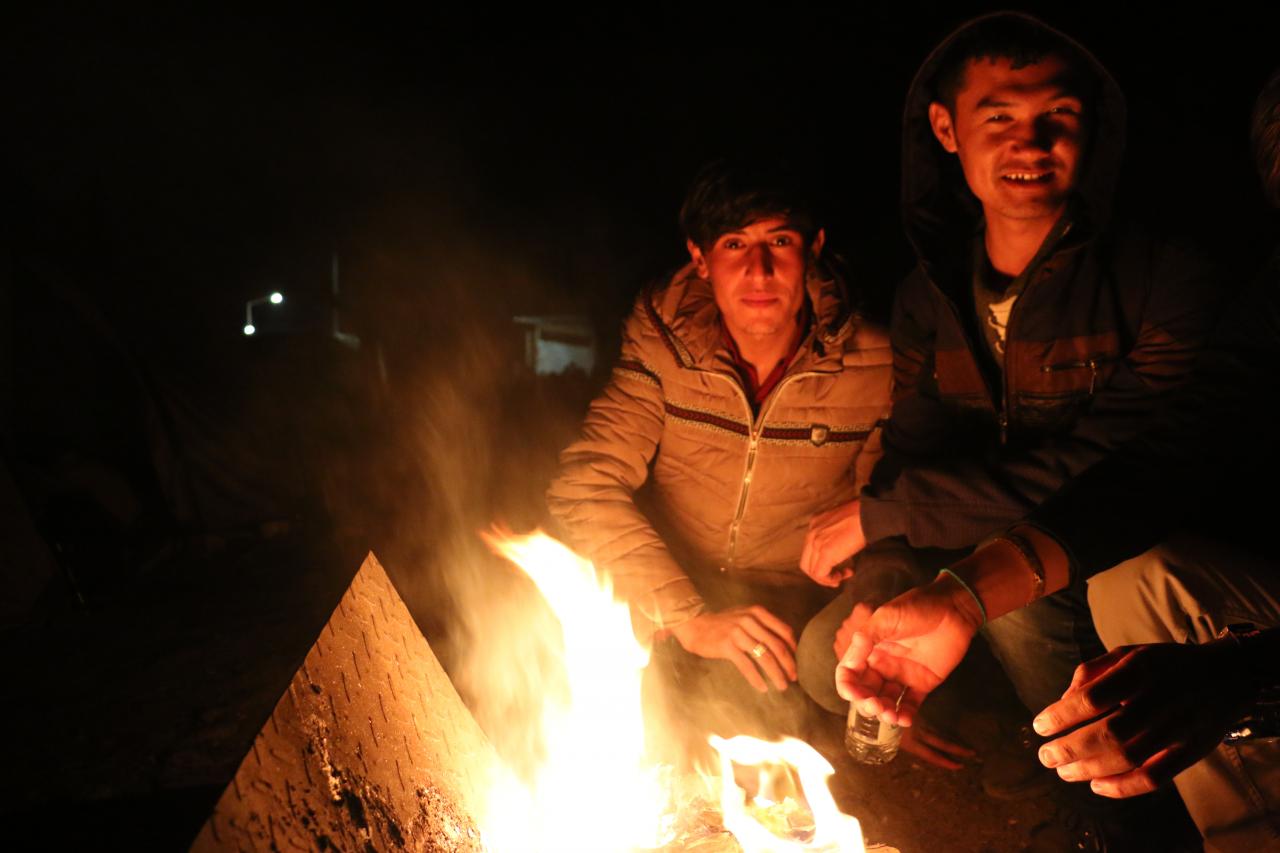 They spent four days in Tehran before they found someone to take them to Turkey. They entered through the city of Van, moved on to Istanbul, then headed to the port city of Izmir. From there they took a smuggler’s boat to Greece.

The journey cost a total of $2,200 per person: $500 from Afghanistan to Iran, $700 from Iran to Turkey, then $1,000 for the hour-long boat crossing from Turkey to Greece. An above-board ferry ride for the same journey costs 20 euros.

After the month of travel and sleeping rough, “Now I’m so tired,” Darya says, sitting by a fire in an informal encampment next to the police-run Moria registration camp on Lesbos. His brother-in-law holds Darya’s eight-month-old niece in front of the fire to warm her.

More from this series: Crossing an ocean for her daughter

“She hasn’t been crying much,” he says. “Some days it was too hot, some nights too cold. Here [in Greece]it’s less cold than in the mountains.”

He says he was afraid for her on the boat crossing.

“At first the water was calm, but about halfway across the sea got rough. After that people were so scared.” They were about 50 in the boat. “I was so scared. Not because of myself but because of my sister and her children.”

But once they reached the shore he was surprised to see people standing on the beach to welcome them.

“When we arrived I saw so many people waiting for us to welcome us. They changed our clothes and shoes, they gave the children socks and shoes,” he says. “They were so kind.”

In the camp there are other volunteers and organizations that bring them food. For families like Darya’s, who only have enough money to cover travel to mainland Europe, the service is essential.

Once in Athens, Darya says he will call his family to ask for money to cover the rest of the journey west. They will get it through another Afghan in Greece through the hawala system, in which money is transferred through a network of trusted brokers.

More from this series: Families split apart after one of Greece’s worst migrant boat disasters

Darya wants to be an engineer. He’d only completed his first semester at university before making this journey.

“I love mathematics,” he says, his face alight with enthusiasm. “I want to be an engineer and make so many nice houses. I love television shows about engineering.”

He says he hopes to continue his studies in Switzerland, where many of his friends from his hometown are. “But first I have to study the language.” His classes in Zurich, his preferred destination, would be in German.

Darya learned his excellent English at an institute in his hometown when he was 13. It was during the war and there were many foreigners in Afghanistan. A friend of his was a translator with the Americans. He became an English teacher. Then came the Taliban.

“The Taliban say English is a pagan language — if you continue teaching it they will kill you,” he says.

Though he is excited for his new life in Europe, he misses home terribly. He misses his three brothers and his parents. “Mostly I miss my friends. I was always with my friends,” he says. He hopes to marry a woman from Afghanistan and have a family one day.

But all that is a long way off. For now, he is focused on the journey west, where much remains uncertain. Darya doesn’t have his ID with him. Since he arrived to Greece, neighboring Macedonia changed its border policy, only allowing crossing to Syrian, Iraqi and Afghan refugees. Many Afghans without IDs who could not prove where they were from have gotten stuck at the border between Macedonia and Greece.

“If I’m not accepted as a refugee I’ll die in Afghanistan,” he says, though the hope in his face suggests that he doesn’t quite believe what he’s saying.