You are at:Home»Human Rights»Genocide»In fact: Why protests in Kabul signal rise of a new Afghanistan 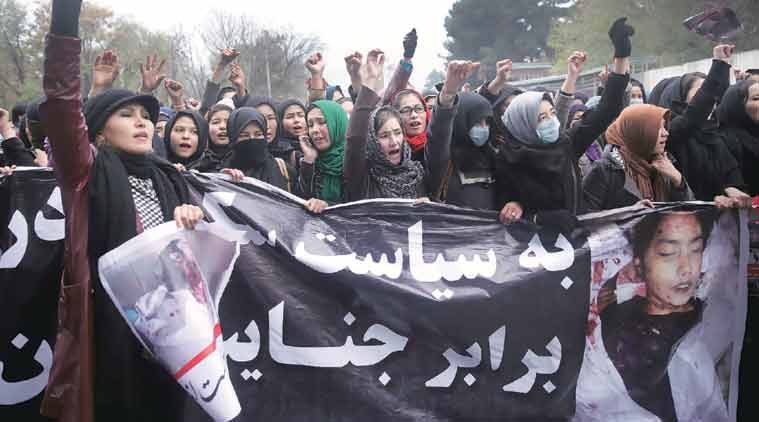 In fact: Why protests in Kabul signal rise of a new Afghanistan

By admin on November 16, 2015 0 Comments
Thousands of women marched to protest the killing of seven Hazaras. (Source: AP)
Share this story

Images from Kabul last week were breathtaking: tens of thousands of women, children and men, marching in the largest mass demonstrations Afghanistan has ever seen.

Thousands of women marched to protest the killing of seven Hazaras. (Source: AP)

A day after victorious Taliban forces rolled into Mazar-i-Sharif in August 1998, their commander, Mullah Mannan Niazi, climbed atop a city mosque to proclaim vengeance. “Last year you rebelled against us and killed us,” he told the city’s ethnic Hazara. “Now we are here to deal with you. Wherever you go, we will catch you. If you go up, we will pull you down by your feet; if you hide below, we will pull you up by your hair.”

Thereafter, as more than 8,000 people were killed, many bleeding to death on the streets, the West watched in silence. Hoping the Taliban would expel Osama bin Laden from Afghanistan, the US did nothing to stem the tide of Pakistani aid flowing to the jihad.

But now, 17 years on, something strange is happening: a new Afghanistan is rising from the fields the Taliban soaked in blood.

Images from Kabul last week were breathtaking: tens of thousands of women, children and men, marching in the largest mass demonstrations Afghanistan has ever seen. Incensed by the beheading of seven Hazaras, including two women and a child, protesters demanded revenge against the Taliban and Islamic State. Led by youth groups who issued calls to gather on social media, the protests were the biggest show of anger against theocratic fascism since the Charlie Hebdo protests in Paris — and arguably far more significant.

Fourteen months after President Muhammad Ashraf Ghani staked his all on a gamble to secure peace with the Taliban, the protesters are telling him to change course. The killings aren’t new, either in their scale or savagery — but the collapse of Ghani’s peace bid has led many Afghanistanis to question whether his policies aren’t eroding the legitimacy of the republic’s constitutional institutions, without gaining peace in return.

“We’re seeing the emergence of a new society in Afghanistan,” says Amrullah Saleh, a former spy chief who is now a top opposition politician. “There are a number of reasons for this: education, economic opportunity, the fear that the Taliban might take power again. The emergence of a national media, as well as digital platforms, have breathed life into a genuinely pan-Afghanistan identity.

“For the first time in Afghanistan’s history, we have a consensus around the institution of the republic. These young people don’t want to dismantle the state, they want to make it accountable,” Saleh says.

The message from Kabul’s streets ought also be heard in the world’s capitals — where the legitimacy of the war to build a new Afghanistan is under growing siege. For years now, key western voices have cast Afghanistan’s democracy as a lost cause.

In an influential essay in The New Yorker in 2012, British diplomat and conservative politician Rory Stewart argued that the pursuit of modern democratic values in post-9/11 Afghanistan was founded on was “an Enlightenment faith that there is nothing intrinsically intractable about Afghanistanis culture and society”. Doug Bandow, writing in The National Interest in 2010, punched holes in hopes that Afghanistan could be transformed “into a Western-style liberal democracy”. Hamida Ghafour, writing in the UAE-based The National, railed against donors “obsessed with the idea of establishing a western-style liberal democracy”.

From 19th century texts like Howard Hensman’s eyewitness account of the Anglo-Afghanistan War of 1879 to modern histories like William Dalrymple’s Return of a King, writing on Afghanistan have been suffused with ideas such as these. The country has been cast as a mosaic of warring tribes, governed only by primitive cultural honour codes, religion and power.

But the proposition that there is no cultural foundation for democracy in Afghanistan is historically dubious. Farhat Taj has demonstrated the existence of democratic traditions among the Pashtun tribes who straddle the Afghanistan-Pakistan border. The work of historian Sana Haroon demonstrates, likewise, that what western commentators refer to as tradition was, in fact, the outcome of complex political contestation between tribal custom, nationalism and neo-fundamentalist theology.

Indeed, the practice of democratic politics — and its foundational structure, a central state — isn’t a post-9/11 western imposition. Even a cursory acquaintance with Afghanistan history would show that the state had strengthened itself steadily for over a century, building up to the promulgation of a new constitution in 1964.

Muhammad Zahir’s modernising monarchy was overthrown in 1973, and a republic declared. The idea that Afghanistan ought to be a democracy was not assaulted, except from Islamists backed by Pakistan’s intelligence services, who argued that the Shari’a, not popular will, ought to be the basis of government.

In 2001, when Afghanistan’s leaders met in Bonn to deliberate how the country ought to be rebuilt, they chose to adopt the 1964 constitution as its basis: simply, democracy was an Afghanistanis’ choice, not a western one.

Like every nation state in history, the post-9/11 Afghanistan state emerged from blood and steel, war and development. From the outset, though, it lacked the resources to grow. The neoconservative argument was that left to themselves, people would make rational choices — government was a hinderance. The Iraqi state was thus dismantled; and in Afghanistan, investments in administration were minimal, and real power left in the hands of so-called tribal leaders.

Hamid Karzai, it bears remembering, was installed as President not in pursuit of some grand project to promote democracy, but to address concerns that a regime led by the victorious Northern Alliance might not have legitimacy among southern Pashtuns, thus displeasing Pakistan.

In Afghanistan, the state-building project was complicated by the fact that two generations had been destroyed by superpower backed wars — leveling the kinship networks and cultural relationships on which civil societies are built. The challenge was, thus, not just of rebuilding politics, but the polity itself.

The protesters on the streets of Kabul have made one thing clear: as the world searches for the exit doors, it can’t blame the people of Afghanistan for chosing their fate. The idea that Afghanistan is a lost cause isn’t just untrue — some would say it is racist libel.