You are at:Home»Refugees»Australia»Asylum seekers’ plight in focus at insightful breakfast 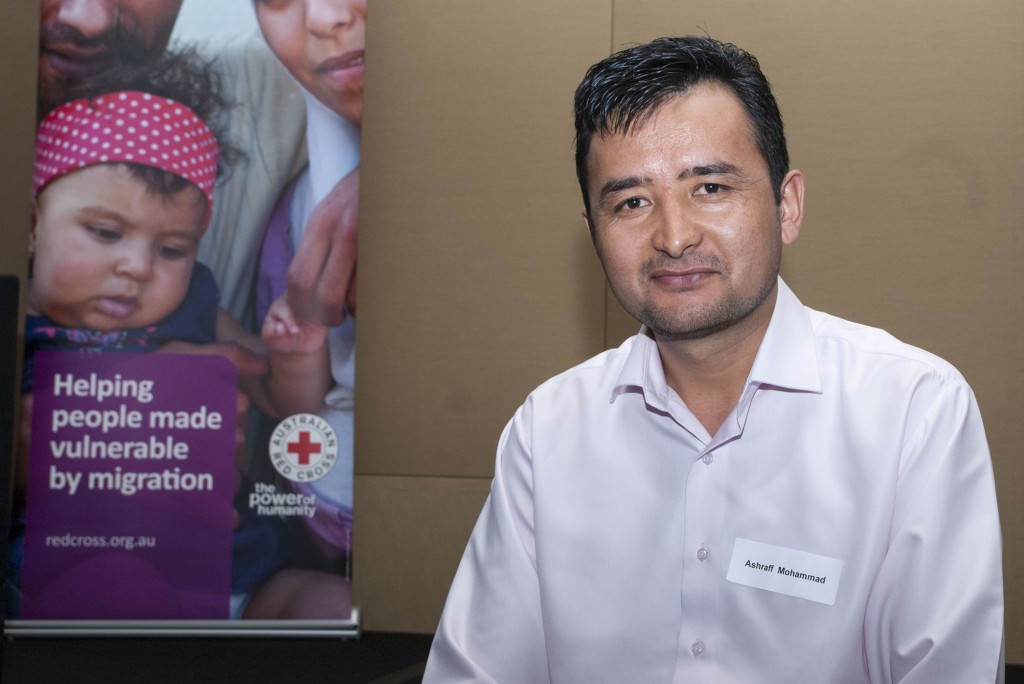 Ashraff Mohammad has experienced first-hand what it means to be the member of a persecuted minority. He recently shared his story at Conversations About People Seeking Asylum in Australia breakfast, held on Tuesday, 15 September at the UWA University Club, Crawley. PHOTO: Marco Ceccarelli

It is difficult to hear the personal account of Mr Ashraff Mohammad, a former refugee from Afghanistan who belongs to the Hazara ethnic minority, without being shaken to the core and feeling like more needs to be done for those seeking asylum in Australia.

Mr Mohammad recently told his story at the Conversations About People Seeking Asylum in Australia breakfast, held on Tuesday, 15 September at the UWA University Club, Crawley.

Sponsored by MercyCare, the Association for Services to Torture and Trauma Survivors (ASeTTS), The Red Cross, the Centre for Human Rights Education, Curtin University, Murdoch University, The Humanitarian Group and the Coalition of Asylum Seekers Refugees and Detainees (CARAD), the event aimed to raise awareness surrounding the plight of people seeking asylum in Australia who have arrived by boat.

“Hazaras are one of the religious and ethnic minorities that have lived in Afghanistan for over 4,000 years. Throughout history, they’ve been subject to mass killings, torture and discrimination,” began Mr Mohammad, immediately silencing the attendance of some 80 people.

“Often, their lands have been taken from them. In the 1880s, 63 per cent of my people were massacred. Out of one million, 630,000 were killed; the remainder fled or sought shelter in the mountainous part of Afghanistan.

“The only reason why some survived is that the mountainous region is very isolated, remote and difficult to get into,” he added.

When the Taliban came to power throughout the latter part of the 1990s and Hazaras were given the option of converting to the Sunni denomination of Islam (the majority of Hazaras are Shiite Muslims), leave the country, or be killed, Mr Mohammad fled to Pakistan with his family.

At the age of seven, he found himself in Quetta, a city in Pakistan, selling plastic bags to help his family financially.

When, in 2001, a systematic killing of Hazaras began in Quetta and he lost relatives, including his seven-year-old niece, he made arrangements to flee to Australia.

“I went through Thailand, Malaysia and Indonesia to catch a boat to Australia. Each time a wave hit us, we would close our eyes and think ‘this is the end’ as many of us could not swim. This went on for almost seven days until the Australian Navy rescued us.”

Mr Mohammad’s distress at having left his wife and two children behind due to financial reasons was only matched by the 18 months he spent inside the Curtin Detention Centre in the Kimberley region.

He described his time within the centre as a ‘psychological shock’ experienced by many who flee war-torn countries only to be faced with the misery and isolation of detention centres.

As he lives under refugee status and awaits his citizenship, Mr Mohammad is worried he is giving his family back home false expectations of reaching Australia.

Mr Mohammad’s account was complemented by presentations on the legal challenges and common misconceptions faced by asylum seekers from CEO of The Humanitarian Group, Helen Pearce, and Associate Professor of Psychology at Murdoch University, Dr Anne Pedersen.

While Ms Pearce explained the legal framework around seeking protection in Australia and some of the particular challenges faced by refugees who arrive in Australia by boat, Dr Pedersen challenged a number of myths with her qualitative and quantitative research-based evidence.

She asserted that challenging myths is important given that people who are more negative about asylum seekers are also more likely to accept these myths as being true.

Some of these myths were:

“Asylum seekers are illegals” – no asylum seeker breaks any Australian law by arriving on a boat and seeking asylum.

“They pose a security threat” – the majority of asylum seekers who have reached Australia have been found to be refugees.

“Australia is being swamped by refugees” – Australia receives a very small number of asylum applications compared with other refugee-hosting countries.

“If they can afford to pay a people smuggler, they are not ‘genuine’ refugees” – It makes no difference whether a refugee is rich or poor – the point is that they are at risk of persecution.

“Refugees don’t contribute to Australian society” – Research has shown that refugees, once they establish themselves, make important economic and civil contributions to Australia.

MercyCare Executive Director of Mission and Culture, Sheryl Carmody, and ASeTTS CEO, Michael Jones, also addressed those invited before the floor was opened up for a Q and A panel.

While Conversations About People Seeking Asylum in Australia opened highly relevant areas of discussion, Mr Mohammad’s story continues to repeat itself across the world and reflects the ongoing plight of hundreds of thousands of individuals.

It is hoped more discussions like these take place and continue to make an impact on Australia’s decision-making process in regards to those desperately in need of being welcomed.