Will Hazaras Be Safe in Afghanistan, After NATO’s Pullout?

Thousands of people in Afghanistan participated in demonstrations in Kabul, Herat, Mazar e Sharif and Bamyan to condemn Hazaras’ latest massacres by the Taliban and other terrorist groups.... 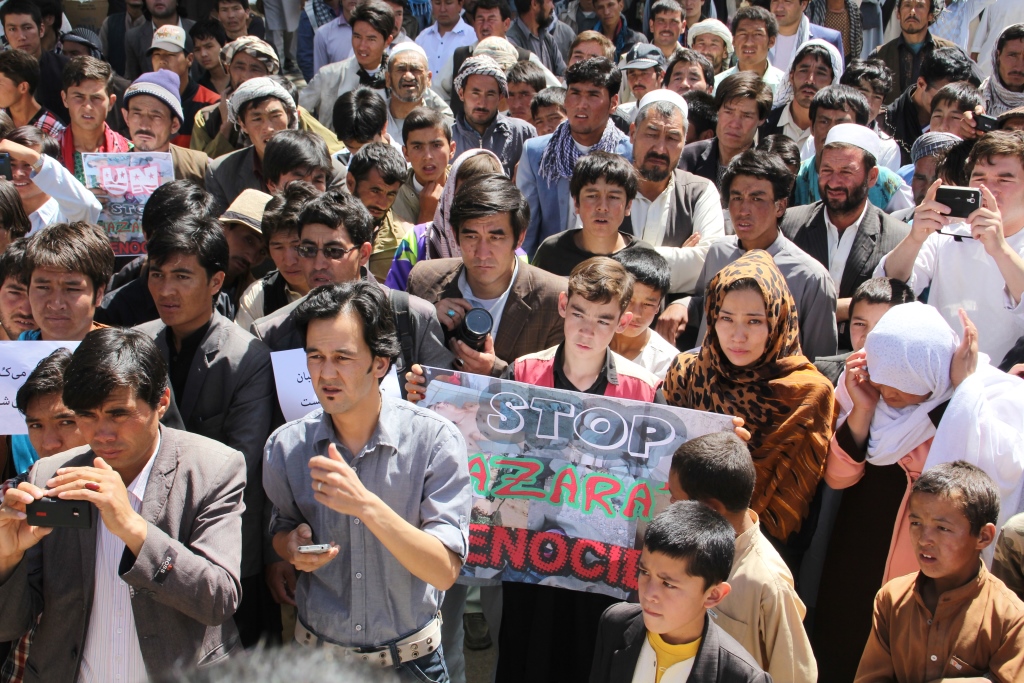 Thousands of people in Afghanistan participated in demonstrations in Kabul, Herat, Mazar e Sharif and Bamyan to condemn Hazaras’ latest massacres by the Taliban and other terrorist groups.

Only in July this year, for the second time the Hazaras are being targeted by the Taliban, once in Urozgan and then in Ghor province.

Then on July 25th 2014, the second attack took place in Ghor Province and as a result 14 Hazaras including women and children were tortured and then shot dead.

Based on the statements of the eyewitnesses, the Taliban combatants, got on the buses and asked the passengers for their identity documents, and then separated the Hazara from non Hazara citizens. They let the non-Hazara citizens go and killed all 14 Hazaras including three children. The signs of torture are seen as well on the bodies of the victims.

The victims of massacre in Ghor Province were on a wedding trip, accompanying a newly- wed couple to Kabul but all were shot dead, including the bride and the groom.

It is Eid day now, the feast for the end of Ramaddan, but the Hazaras are still mournful in these days facing two shocking massacres in one month.

Though the civil moments have already began demonstrations in the larger cities such as Kabul, Herat, Mazar e Sharif and Bamyan to condemn these massacres but the concerns about the security of the Hazaras go beyond it.

The Hazaras, with more than six million people, make one of the main pillars of democracy in Afghanistan with more than two million voters that made them notably as a strong wall against terrorism and fundamentalism in new Afghanistan.

Not only in elections they are the power balancing ethnic group, but the Hazaras are so far being also the leading ethnic group for building schools, for expanding education for girls and women and promoting literacy for all. They have built the best private universities in Afghanistan and most of the talented students of Kabul University are Hazara.

On the other hand they are vulnerable as the threats of the Taliban or the armed groups such as Kuchis increase against them.

The Hazara provinces are the most peaceful provinces in Afghanistan as they have embraced peace, democracy and education but they are continuously targeted in the borders of the provinces while moving from one place to the other. Their facial appearance reveals their identity and the fundamentalist groups such as the Taliban note them easily and mark them as their targets.

Not being defended by the Pashtun-led government, the Hazaras concern that they might lose their notable achievements of the last decade, as they are being continuously targeted by the armed groups such as Taliban and the Kuchis in different provinces of Afghanistan.

In addition to Hazaras of Afghanistan, the Hazaras in Pakistan are being massacred in Quetta as well, where more then one thousand and five hundred people are being killed in the last three years. Lately, Human Rights Watch organization has published a special report on Hazara massacres in Quetta under the title; “We Are the Walking Dead”.

Historically the Hazaras are being massacred three times including once during the Taliban, therefore they fear the return of the Taliban on power as NATO pulls out.

Sorry Latifa, You are a Hazara
Next