You are at:Home»Human Rights»Genocide»Worst of the Worst’: Who Did U.S. Release From Gitmo for Bergdahl? 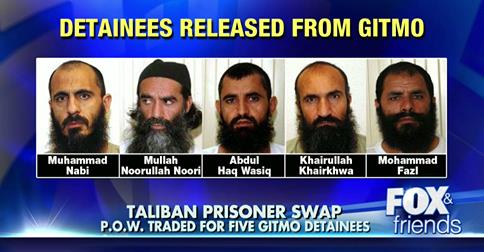 Worst of the Worst’: Who Did U.S. Release From Gitmo for Bergdahl?

After the release this weekend of a U.S. soldier held captive by the Taliban for five years, questions are now being raised about the five terrorists released from Guantanamo Bay in the prisoner swap. Former CIA operative Gary Berntsen joined Steve Doocy this morning to give us some background on the men.

The names of the detainees are Mohammad Fazl, Mullah Norullah Noori, Mohammed Nabi, Khairullah Khairkhwa, and Abdul Haq Wasiq. They are believed to be the top five Taliban leaders at the prison and were selected in 2012 by Taliban leaders as part of initial negotiations.

Berntsen noted that Wasiq was the Taliban’s deputy chief of intelligence, and along with the other four were involved in the murders of 6,000 Hazara tribesmen when the Taliban seized the city of Mazar-i-Sharif.

“These men conducted a genocide. They are among the worst people on the planet,” said Berntsen, noting that the men will now stay in Qatar for a year “at the pool” and will return to the Taliban as “rock stars” after that time is up.

Berntsen said this is a “meaningful concession” by the Obama administration and will inspire the Taliban to continue the fight. Berntsen, who was active in the CIA when these men were captured, said he would have tried to find another way, calling the price for Sgt. Bowe Bergdahl “too high.”