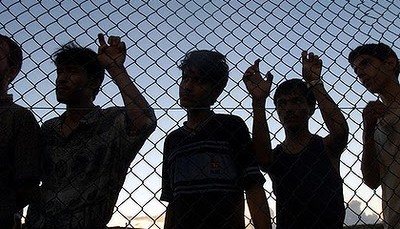 Refugees are the most vulnerable class of people in the world. They lack the protection of any state until and unless they are afforded it. Their desperate situation should oblige others to treat them with a compassionate realisation that refugees are human beings and their vulnerability should not be politicised for unethical ends. Currently in Australia there is a lack of understanding of the threats which cause people to flee their homeland and seek asylum. Australia has consistently throughout history taken arms to defend innocent people in wars thousands of kilometres away. But the current refugee policy turns its back on the very victims of tyranny and terror who have now arrived on our shores. This needs to change.

Australia has voluntarily ratified human rights conventions and treaties to uphold human rights both domestically and internationally. However, the current refugee policy damages its standing in the international community as its uncompassionate attitude is contrary to Australia’s human rights obligations. In a western liberal democracy like Australia, people have freedom of choice in most matters that shape their lives; it is often hard to imagine not having any choice in life and only playing the cards you are dealt. This misunderstanding leads large sections of the public and media to describe asylum seekers as illegals and/or queue jumpers and thereby creating a negative image of the “Asylum Seeker”.

I have personally lived the life of a refugee, and like millions of others it was not a matter of choice for me to leave my home, family and friends in Afghanistan. I did not choose to be born a Hazara, and Hazaras did not choose to be persecuted by the Taliban. As a former refugee, there was no choice between a legal or illegal path to safety, and there certainly was no choice of a queue. There was only one way to escape the persecution of the Taliban.

Today, in my work as a human rights lawyer, this lack of choice applies to most of the asylum seekers I deal with, no matter which country or region they’re fleeing. They are desperate, and desperate people will do desperate things, such as paying people smugglers and piling their families on leaky boats. Thus, the start of a compassionate policy has to be the understanding that refugees who flee their home countries and board leaky boats have no choice but to flee by any means possible. More importantly, the debate on whether or not one chooses to become a refugee is completely irrelevant. Weight needs to be given to the fact that these are human beings and must be treated as such. Seeing a fellow human being in such a vulnerable state raises a moral and legal demand to treat that person with compassion.

The government’s persistent use of language such as “illegals”, “boat people”, “queue jumpers” and more recently “detainees” helps to promote anti asylum-seeker sentiments, dehumanises asylum seekers, and portrays them as unworthy of our compassion and of our sovereign protection. Taking the human face away from the refugee or asylum seeking issue is the first step in eliminating any chance of compassionate treatment towards them; disregarding international and legal obligations is much easier after that.

Stanford University professor Philip Zimbardo’s work can shed some light on the issue of dehumanisation. Whether intended or not, at the core of this process of labelling and use of terms such as “illegals”, “boat people”, “queue jumpers” and “not the sort of people we want in this country” is the process of dehumanisation of asylum seekers who are depicted as subhuman, and non-comparable in humanity or personal dignity with ordinary Australians.

Such labelling by the government employs prejudice, negative stereotypes or verbally abusive terms to demean and degrade refugees. The inadvertent outcome of this dehumanisation results in the transformation of ordinary, normal people into indifferent or even wanton perpetrators of evil as evidenced in the works of professor Zimbardo:

“Dehumanization is like a ‘cortical cataract; that clouds one’s thinking and fosters the perception that other people are less than human. It makes some people come to see those others as enemies deserving of torment, torture, and even annihilation.

As I have already stated, refugees are human beings. They are men, women and children with hopes, fears and rights. In political discourse, our politicians often forget or intentionally disregard that very crucial point: the definition of human beings is not centred on place of origin, skin colour, race or faith. As Persian poet Sa’adi puts it:

“Human beings are members of a whole, in creation of one essence and soul./If one member is afflicted with pain, other members uneasy will remain./If you have no empathy for human pain, the name of human you cannot retain.”

International law recognises this through international and national human rights conventions and laws that protect human beings and do not define or discriminate against particular classes of human beings such as refugees. In fact the purpose of the Convention relating to the Status of Refugees (the Refugee Convention) is to extend human rights protections to the most vulnerable groups of human beings. Australia has recognised and ratified international treaties in order to participate in the international system of law and maintain its position among the community of nations. In so doing, Australia has agreed to be bound by the scheme of international responsibilities that regulates the actions of sovereign states.

Take the example of refugee children and their human rights under international law. In this respect Australia ratified the Convention on the Rights of the Child (CRC) on 17 December 1990, the International Covenant on Civil and Political Rights (ICCPR) on 13 August 1980 and the Refugee Convention on 22 January 1954. The ratification of these conventions by Australia are explicit agreements to ensure that laws are applied in a manner that gives proper expression to the treaty obligations and convention provisions with effect under domestic law. Certain provisions of these treaties are mirrored in domestic legislation. For example article 1A (2) of the Refugee Convention is reflected in sections 91R and 36 of the Migration Act. In addition all Australian states have child protection legislation which in most cases reflects article 19 of the CRC; the protection of children from abuse. Further, common law (the body of law made up of court judgments) has confirmed that the legislative provisions should be interpreted by courts in a manner that ensures, as far as possible, that they are consistent with the provisions of treaties to which Australia is a party.

In the light of the above and despite the presence of State and Commonwealth legislation, Australia has frequently failed to meet its human rights obligations when it comes to the CRC and the ICCPR in regard to children in its jurisdiction. It is argued that Australia’s immigration detention law is fundamentally inconsistent with the CRC provisions. As per article 37, the CRC only allows for detention of children as “a measure of last resort” while section 189 of the Migration Act takes detention of unlawful non-citizen children the first and only resort. Australian authorities have insisted that the initial detention of children who arrive in Australia without a visa is not unlawful because it is prescribed in the Migration Act and it is so-called preventive detention for reasons of public interest and national security. The loophole in such an argument is that a child would hardly pose a risk to national security.

In an increasingly globalised world, Australia’s geographical isolation does not mean that we are not affected by events around the world. This is evidenced by the Bali Bombings, David Hicks training with the Taliban, and Australia committing to the “war on terror”. More specifically Australia’s role along with other international forces in Afghanistan has affected the situation in Afghanistan and Australia. For Hazaras removing the Taliban from power in 2001 meant that we would not be persecuted anymore. However this optimism proved to be short-lived as the Taliban regrouped three years later and started targeting Afghanistan’s Hazara population once more. The resurgence of the Taliban in Afghanistan and the targeted killing of Hazaras in neighbouring Pakistan by Lasker-e-Jangvi saw a hike in the number of boats carrying Hazaras seeking asylum in 2007/2008.

More inadvertent consequences can be seen in the association Hazaras have had with the western forces in Afghanistan. In a recent message the renowned Mujaheedin leader Gulbadin Hekmatyar, the leader of the Hezb-e Islami political party, threatened to exterminate the Hazaras because they welcomed and sided with foreign forces in Afghanistan. He accused the US of supporting the Hazaras and said that, “The time will come when the oppressed people of Afghanistan will stand for taking their usurped rights and then the [Hazaras] will have no safe havens in any corner of the country”.

Australia’s justification to go to war in Afghanistan and Iraq was to save human life, to uphold human rights and dignity and to advance the rule of law and democracy; one wonders why we can’t do the same on our shores when the very victims of human rights violations arrive here to seek refuge?

Australia has recognised the significance of association with western forces for Afghans by proposing to grant 800 visas to Afghans who assisted the Australian defence force directly. But Afghans who have helped and sided with the foreign troops morally and politically, and who managed to escape persecution and find their way to Australia by boat, are not afforded the same recognition and compassion even though – as evidenced by Hekmatyar’s threat – the Taliban do not make a distinction between those who directly supported the international forces and those who supported them morally and politically.

The refugee and asylum seeker issue cannot be morally or legally addressed by keeping it contained in one geographical area and out of sight. It is a human issue and has always been so; humans have always had to migrate for one or the other reason. This should be recognised as such and addressed with a compassionate refugee policy that recognises that dehumanisation of refugees could have inadvertent implications, not least the potential to transform ordinary Australians into indifferent perpetrators of evil. It is therefore vital to remind ourselves that refugees are human beings and cannot be labelled to suit a government policy; it is because of this humanness that we need a compassionate policy.

Besmellah Rezaee is a human rights and refugee lawyer who has a strong background in humanitarian work. Besmellah is the son of a former refugee who was also a TPV holder for 3 years under the Howard government. He has a Bachelor of Law and International Studies from the University of Adelaide and a Masters of International Law from the Australian National University. Besmellah was recently named the John Gibson AM Young Migration Lawyer of the Year 2014.