You are at:Home»Human Rights»Why Hazaras are being Killed in Pakistan? 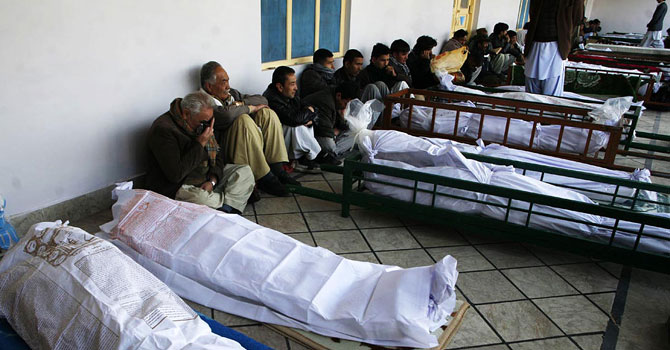 Why Hazaras are being Killed in Pakistan?

Once again Lashkar-e-Janghvi (LeJ) terrorists have managed to kill 28 Hazara pilgrims including women and children in Mastung district, some 50km Southwest of Quetta City, Pakistan and the provincial government once again has failed to protect the lives of its citizens.

With respect to Hazara killings, the terrorists always get right information to murder Hazaras en masse outside of their vicinity. If they can’t find Hazaras outside of their surrounding areas, they easily manage to penetrate into Hazara neighbourhood by crossing heavily guarded security check posts to target Hazaras.

Should we really believe what-so-ever the government and the security agencies say—in terms of the security failure? Do they really not have any information about the killers? Should we really believe that the terrorists are more capable than the writ of the government? No, of course not. It’s not as simple as it is portrayed. Everybody knows about the response of the security agencies to alleged Baloch nationalists. As we all know, thousands of Baloch nationals are reported missing and hundreds of them have already been reported allegedly killed brutally without being presented in the court.

Then what hold the government and law enforcement agencies back to take action against them? It is the “will”. Do they have “will” to go after the terrorists? No, they don’t have. If not, then the question arises why the “will” doesn’t allow the higher authorities to bring the religious terrorists to justice? How many Hazara dead bodies does the higher authority want? Over 1300 Hazaras have already been killed. What does the elite class want Hazaras to do in Quetta City? Or what message the big boss wants to convey to the international community through Hazara dead bodies?
These are the questions need to be analyzed well to get the right answer. Human Rights Watch report 2014 (HRW)says that the militant groups, including the Tehreek-i-Taliban Pakistan (TTP) and some other banned outfits, are operating with “virtual impunity” in Pakistan as the country’s civilian and military institutions are either “unable” or “unwilling” to prevent terrorist attacks.
With regard to the ability of the government and military institutions, we have already discussed it and there’s no need to further discuss, however, the “unwilling” needs to be analyzed well to understand ongoing genocide of Hazaras in Pakistan.

Hazaras as usual have started sit-in protest with their dead bodies on Alamdar Road Quetta to demand action against the religious militant groups especially LeJ and Jaish-e-Islam, which will later on be supported by media, political parties and the civil society.
I strongly favour military action against the religious militant groups particularly LeJ and Jaish-e-Islam affiliated with Taliban and Al-Quaida but “why my community has been picked for the mass lobbying?”