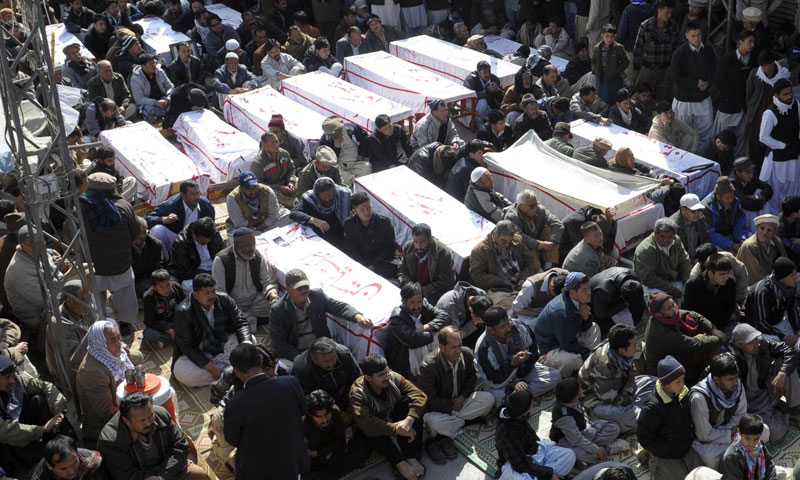 QUETTA: Despite freezing temperatures, thousands of members of the Hazara Shia community staged an ongoing sit-in in Quetta to protest against the killing of Shia pilgrims in a bombing in Balochistan’s Mastung district.

The demonstrators gathered Wednesday morning at Alamdar road, vowing to continue their protests until authorities launch a crackdown against the militants.

Officials said Wednesday that three more injured succumbed to their wounds from Tuesday’s blast on the bus bringing Shia pilgrims from Iran to Quetta. The deaths have raised the toll from 26 to 29.

An official at the Combined Military Hospital (CMH), requesting not to be named, said 26 bodies had been identified while one corpse was yet to be identified. He said 35 injured were under treatment at the CMH in Quetta. “The condition of seven injured is serious,” he said.

A large number of women and children were also part of the demonstration.

The mourners have brought 26 dead bodies along with them and kept them on the road to press the authorities to launch a crackdown against the perpetrators of attack on Shia pilgrims in Balochistan’s Mastung district.

“We will continue our protest until perpetrators of the blast are brought to book,” said Syed Ahmed Raza, a member of the Balochistan Assembly and leader of the Hazara Community.

He lamented that the killing of members of the Hazara community had become the ‘order of the day’ and that the Balochistan government had completely failed to protect the Shia pilgrims coming from Iran to Pakistan.

The banned militant organisation Lashkar-e-Jhangvi (LeJ) claimed responsibility for Tuesday’s attack, which it described as a suicide bombing, and warned of more such attacks.

It was the second attack on Shia pilgrims in this part of Balochistan over the past three weeks; the first attack took place near Quetta on the eve of New Year.

Last year, thousands of mourners staged a three-day sit-in from January 10 to 13 in the aftermath of twin-bombings that had left over 100 people dead.

Meanwhile, Chief Minister Balochistan, Dr. Abdul Malik Baloch visited Alamdar Road on Wednesday and expressed his concern over the Mastung incident. He held a long meeting with members of the community to end their protest.

“We are all victims of terrorism and I stand by you in this hour of grief,” Baloch told the grief-stricken mourners.

Meanwhile speaking to a private TV channel, the Balochistan CM called upon the federal government to provide ferry service for pilgrims from Karachi to Chabahar in Iran.

Dr Baloch said that ferry service would be safe and economical.

The buses of pilgrims returning from Iran to Pakistan are constantly under threat and have been attacked twice this month, he said.

MWM leader threatens to paralyse the whole country on Thursday

Along with Quetta, protest demonstrations are ongoing in other parts of Pakistan including Islamabad, Rawalpindi, Lahore and Karachi, where several big and small sit-ins are being staged against the Mastung massacre.

Speaking to a sit-in in Islamabad, central leader of Majlis Wahdatul Muslimeen (MWM) Allama Amin Shaheedi vowed to prolong the sit-in till realisation of all their demands.

Besides demanding a military operation against Taliban militants, he threatened to paralyse the whole country on Thursday if their demands were not meet.