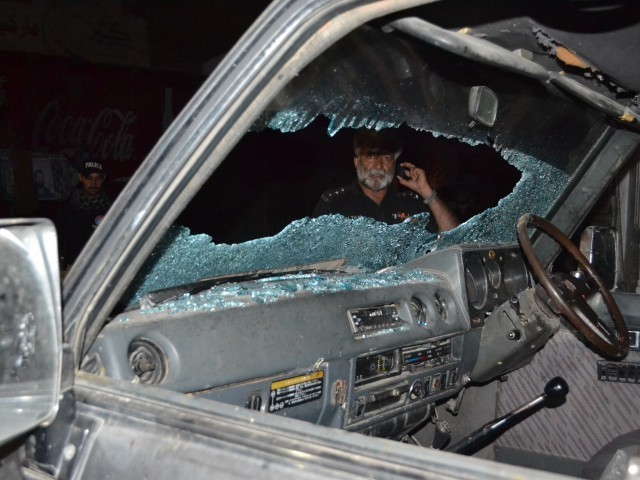 A Pakistani police officer looks at a bullet-riddled vehicle after an attack by gunmen in Quetta on July 15, 2013. PHOTO: AFP
Genocide

By Admin on July 17, 2013 0 Comments
A Pakistani police officer looks at a bullet-riddled vehicle after an attack by gunmen in Quetta on July 15, 2013. PHOTO: AFP
Share this story

A Pakistani police officer looks at a bullet-riddled vehicle after an attack by gunmen in Quetta on July 15, 2013. PHOTO: AFP

QUETTA: Hazara political parties have threatened a civil disobedience movement against the targeted killing of their community members, the latest episode of which saw four Hazaras being shot dead on Monday evening.
A complete shutter down strike was observed on Tuesday in parts of the provincial capital against Monday’s killings on Masjid road. All major shops and markets remained closed on Toghi Road, Abdul Sattar Road, Alamdar Road, MecChongi road and their adjoining areas.

“If this series does not stop, we will jam the entire city with other sympathising parties,” they said, adding that the killers of the four persons on Masjid Road were also also responsible for the killing of three at Khud-e-Dad Chowk.

They said that the attacks had been carried out as part of a conspiracy to promote sectarian violence in the city.
The Hazara leaders said that they were out of ideas for where they could go to secure their constitutional and human rights, adding that thousands of Hazara youngsters have been killed during the past few years.
“State institutions are directly involved in our massacre,” they alleged and added that instead of providing them protection, Hazaras were being pushed against the wall.

With the stores closed, the streets appeared barren. Stringent measures of security were adopted by the government and law enforcement agencies including police, Frontier Corps (FC) and the Anti Terrorist Force patrolled the area.