You are at:Home»Refugees»Australia»No advantage, no work, dwindling hope: the asylum seeker’s lot 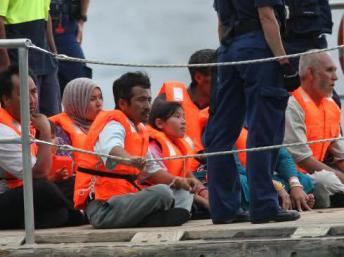 No advantage, no work, dwindling hope: the asylum seeker’s lot

The result of Labor immigration policy is sanity-sapping limbo, people fleeing some of the world’s most troubled regions find

The seven nervous Afghan men sitting on the floor along one wall of the tiny, dark flat in Melbourne’s outer west are the forgotten cargo from the boats that couldn’t be stopped.

As Hazaras – an often persecuted ethnic minority seeking refuge in Australia – they say they cannot go back to where they came from but don’t know whether they can stay in Australia either and they don’t know when they will know. There is no date upon which they can pin any

For an indeterminate period of time, probably many years, they must exist in this and another flat. The walls are cracked, the carpet is lifting and the roof is covered in motley brown stains. There are a couple of old couches dragged in from kerbside cast-offs, but no beds or mattresses.

The men are not allowed to study or work, and live on about $220 a week, 89% of unemployment benefits.

After rent they have barely enough to survive, certainly not enough to send anything much back to the wives and children three have left behind without a breadwinner.

They were each unlucky enough to wash up in Australia in a people smuggler’s fishing boat after 13 August – the date on which the Labor government decreed that the refugee claims of asylum seekers arriving by boat would receive “no advantage” over those who sit for years in refugee camps overseas.

If they had arrived on 12 August they would probably be able to work by now and the processing of their refugee claims would have begun.

Their state of sanity-sapping limbo is not an unintended consequence of government policy. It is the whole point. Removing work rights and delaying the processing of claims for many years was supposed to remove hope and stop the boats.

The problems of the several hundred post-13 August arrivals sent to reopened processing centres on Manus Island in Papua New Guinea and the remote Pacific island of Nauru are receiving some publicity.

But thousands – possibly as many as 10,000 – have so far been released into the Australian community on no-advantage bridging visas live like this, out of sight, in the outer suburbs of Australian cities.

“We have no work, no study. We just stay here and worry about our families … we are full of distress,” says Jawad, through an interpreter, a man who provides proof of how different things could be.

Reza Andesha arrived just over a year ago as a refugee and has now set up business as a driving instructor – the Kabul Driving School (discounts for female customers to celebrate the fact that they can freely learn to drive here) – while he waits for his professional qualifications to be documented. He has also established an Afghan community association to help men such as these.

“I am a tiler, but I would do any work at all, anything. I don’t want to take money from the government,” Jawad says.

“We are living in stress. Sometimes we cry. Sometimes we sing songs to make ourselves happy,” says Ali, who has also left a wife and three children.

“It’s hard to sleep. He was awake until half past three last night. He was

worrying,” says Jawed, motioning towards another of the men, Mohammed.

The men say they walk around sometimes and visit other Hazaras in the neighbourhood, but they don’t venture far, as recently-arrived Magrit, a young, single man, explains.

“We don’t go out very much. We heard of other Hazara people who were attacked on the train. We don’t want to be near any trouble because it might be bad for our case.”

Asked whether they would have come had they known of the new no-work policy the men nod. One had been waiting for many months in Indonesia just to register for refugee processing with the UN high commission for refugees when he heard about the Australian policy change. He came anyway.

Asked whether they would have come under the Coalition’s proposed policy – which would grant proven refugees work rights but under a temporary protection visa with no prospect of permanent resettlement and no chance of bringing their families to Australia – some nod also.

“I was in danger. I had to escape,” says 30-year old Mohammed. “I had worked for a contractor to the US army. I was a labourer. The Taliban warned me. I didn’t believe them. But then they killed the brother of my friend so I ran away.”

Magit says a temporary protection visa “would solve one problem, but make another one”. He adds: “At least we would be able to work then.”

But Mohammed looks distressed. “If we can’t bring ever our family that will be like doomsday for me,” he says.

In a neighbouring suburb, Syed Ejan Hussein Zaidi, a Shia Hazara who was working as an accountant in Quetta, Pakistan, before he fled the escalating attacks on Hazara by militant groups such as Lashkar-e-Jhangvi is in the same situation.

He says the money he receives is difficult to survive on, but he feels bad every time he withdraws it from the bank because he hasn’t earned it.

“Yeah I would rather, earn money myself, OK, than money given by the government of Australia us. I really feel quite, what shall I say, uneasy when I am paid such money when I draw out from the bank such money because I do not do anything, but I am paid,” he says.

He says the limbo life is taking its toll on him and other asylum seekers on bridging visas.

tense situations. It turns the people into depression,” he says.

Across Melbourne in yet another near empty flat sits Arman [his name is changed for the protection of his family]who fled Iran when the authorities discovered the underground Christian church of which he was a member.

“I became a Christian … my parents were not happy about it but they accepted … but my beliefs were different from my fiancee so we separated. I had to live as a Christian secretly, do my Bible studies secretly, but then the secret police found out about our group, they questioned some of our members. I decided to run away while I still could. I paid $6,000 to get to Australia.

“We know the government here is having a big argument with each other … We don’t know what is going to happen. We are wasting time, losing time, with nothing to do. We can’t go back and we can’t do anything here, we just sit and wait.”

“I don’t understand why they don’t let us work. If we work then we can stop taking money from the government … I feel useless. Men are meant to work. Men who don’t work get sick.”

Arman has found a bicycle to avoid the cost of buses and trains. He uses it for the few outings that punctuate the long boring weeks: a trip to the library, Bible studies two weekday evenings and church on Sundays.

There’s no money for anything else. “I paid the rent yesterday,” he says. “Now I have $10 left for the next 12 days.” He has been given an old television, but for it to work he needs an aerial. “I think they cost $60.” He laughs at the improbability of saving such a sum.

Cath Scarth is chief executive of AMES, a company contracted by the federal government to house asylum seekers released on bridging visas for up to six weeks, help them rent a house and provide some basic English language training and instruction on life in Australia.

“This is a highly resilient group of people. They are not dependent and they often help each other,” she says.

“There are some wonderful stories, like the Iranian man who was a personal trainer. He gets the younger guys up in the morning and takes them out for a run.”

“But we are concerned that over time without hope they will get demoralised. We fear for their health and wellbeing living in this perpetual state of not knowing … we have to try to make sure they don’t go from being resilient to being depressed and dependent.”

Moving into completely empty flats and with no money, asylum seekers have no choice but to turn to charities, who are also deeply concerned and fast running out of emergency supplies.

UnitingCare in Werribee, in Prime Minister Julia Gillard’s own electorate, ran out of food vouchers in February for the first time in 13 years because of the extra demand from hundreds of asylum seekers in the area.

The St Vincent de Paul chief executive, Dr John Falzon, says the no advantage test is “an incredibly cruel and punitive way of treating people” and is also stretching charities such as his past capacity.

He says: “They are released, they end up in a completely empty flat and they’re told, here’s the number for Vinnies … We help as much as we can but it’s putting an incredible strain on our resources. It’s demeaning for the people and it isn’t stopping the boats or preventing people from being drowned at sea.

“The aliens in our midst is how these people are being portrayed … it’s a damning indictment of where Australia has moved to.”

But as the boats keep coming and the asylum detention centres fill to bursting, budget pressures mean more asylum seekers will be released to a life of limbo in the suburbs, not just the single men who have been released so far, but now also families.

On the windowsill of the Afghan Hazaras’ flat is a large tin moneybox. “We put some coins in there when we can,” Jawed explains. “They’re for the poor people.”