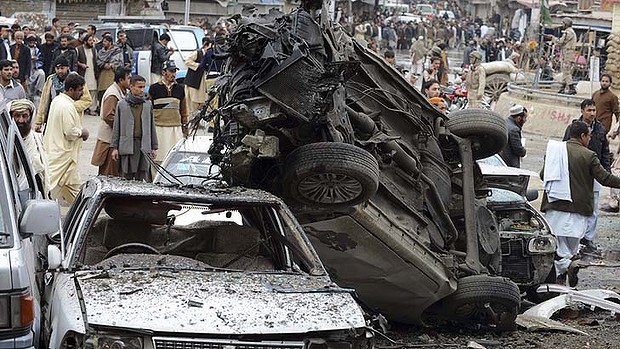 No sanctuary: Onlookers at the site of a bomb explosion in Quetta, on the western border of Pakistan, which killed 11 people and wounded dozens more. Photo: AFP
Genocide

By Admin on March 30, 2013 0 Comments
No sanctuary: Onlookers at the site of a bomb explosion in Quetta, on the western border of Pakistan, which killed 11 people and wounded dozens more. Photo: AFP
Share this story

Despite the risks of the long, slow boat trip to Australia – made starkly evident by the Christmas Island disaster this week when two asylum seekers drowned – hundreds of ethnic Hazaras in Pakistan are planning the same trip.
Facing what they have described as a ”systematic genocide” in Pakistan, more and more Hazaras are trying to leave by any means possible.
Fairfax Media understands the 95 asylum seekers on board the fishing boat that capsized off Christmas Island were all Pakistanis, some Hazara and others Pashtun. A boy aged four or five and a woman in her 30s died.

Hazaras, easily identifiable by their Asiatic features, have for generations been the target of sectarian violence in Pakistan and Afghanistan. Sunni extremist groups, in particular Pakistan’s Lashkar-e-Jhangvi, have vowed to eliminate them because they are Shiite Muslims.
Advertisement

For hundreds of years, Afghan Hazaras have fled for the relative safety of Quetta, on Pakistan’s restive western border. The latest wave of refugees has been driven out of Afghanistan by Taliban violence. But Quetta is no sanctuary. This year there has been an alarming increase in the rate and severity of attacks on Hazaras in Pakistan. In eight attacks, 216 Hazaras have been killed and more than 300 injured.

The deadliest was when a bomb in a snooker hall on January 10 killed 94 people. Lashkar-e-Jhangvi claimed responsibility.
In Pakistan, Hazara representatives told Fairfax young Hazaras, especially, feel they can no longer live in Pakistan.
”Young Hazara men are trying to go by boat, trying to get to Australia,” Yasin Changezi says.
”This is something that is normal, that everybody in Quetta, all of the youth, try to do. Money is not a problem for them but finding a legal way to leave Pakistan is a very real problem.”

Sajjad Hussain Changezi (no relation) says most asylum seekers paid about 700,000 Pakistan rupees ($6800) but up to 1.2 million rupees for the chance to go to Australia.

After a flight to Malaysia, Indonesia or Thailand, they board boats from Indonesia. The risks are known.

”They calculate it. They openly say: ‘If I stay in Pakistan, there’s a bullet for me. If I try to go to Australia and I drown, I was already dead in Pakistan anyway. But I might make it and perhaps I can start a new life,”’ he says. ”More and more people from our community are making that decision.”

The diaspora website Hazara.net says more than 300 Hazara have died trying to get to Australia by boat. Sajjad believes the number may be more than three times that.

”Whenever a ship capsizes, it carries about 200 people, so many passengers,” he says. ”And we know of multiple occasions when the boats … have capsized in the waters between Indonesia and Australia.”

Last year, Afghanistan and Pakistan were two of the largest sources of asylum seekers coming to Australia. The number of Afghans who arrived on Australian shores rose 79 per cent to 3079, while Pakistanis jumped 84 per cent to 1512.
Australia’s Immigration Department does not release statistics on ethnicity but the vast majority are understood to be Hazara. There are now 50,000 Hazaras living in in Australia.

Almost all of Pakistan’s 600,000 Hazaras lived in two tiny, fortified enclaves within Quetta. Travelling outside the walls of Mehr Abad, or Hazara Town, means risking being shot or kidnapped.

Even inside the population is not safe. The snooker hall bombing inside Hazara Town has shaken its residents, Fatima Atif says.
”We live in an open jail, we have been completely isolated and nobody can move out without fear for their life,” she says. ”We don’t get chances to go for education, for business, for any kind of activity, not even to see someone. We don’t have any freedom.”
Sajjad says Hazaras are victims of a ”systematic genocide”.

”We are specifically targeted because of the way we look,” he says. ”There is an assumption that every Hazara is a Shiite.”
For Hazaras in Quetta, there are few opportunities for work or study. Hazara-run businesses are forced to shut down, or their owners kidnapped. The University of Balochistan formerly had 300 Hazaras enrolled, now it has none, after buses carrying Hazara students were blown up.
”I’ve not lost my siblings but I’ve lost two first cousins, many friends and many second cousins,” Sajjad says. ”And I have a friend whose brother was drowned trying to get to Australia. I know a family, the whole family, the mother, the sister, her daughters and sons, all were drowned – except one son, he survived.”

Atif lost a cousin. ”Imran drowned in August but some in our family is still hoping he might be alive,” she says. ”He has not been announced as dead, he is just lost.”

Lashkar-e-Jhangvi , based in Punjab and with links to the Taliban and al-Qaeda, openly boasts that it intends to keep attacking Hazaras.
”We are neither afraid of Governor’s rule nor the Pakistan Army and we will continue to kill Shiite Hazaras in their homes,” spokesman Abu Bakar Siddiq says.

Lashkar-e-Jhangvi has been proscribed as a terrorist organisation in the US, Britain, Australia and Pakistan but its operatives move about unhindered and attack with impunity in Balochistan.

They publish threats in newspapers and have distributed pamphlets in Hazara Town warning they intend to kill all Hazaras. They even advertised a mobile number people could text if they saw Hazaras in the street in Quetta, so Lashkar-e-Jhangvi operatives could attack them.
Pakistan’s Supreme Court has taken the extraordinary step of investigating unbidden violence against Pakistan’s Shiites, in particular Hazaras.
Chief Justice Iftikhar Muhammad Chaudhry says authorities had been cowed into inaction by terrorist threats.
”Action should have been taken against Lashkar-e-Jhangvi a long time ago,” he says.

The Pakistan director for Human Rights Watch, Ali Dayan Hasan, says government inaction suggested it was indifferent to, or even supported, the extremist violence.

”The Pakistani authorities are just indifferent bystanders to slaughter at best, or callously supportive of those perpetrating these massacres at worst,” he says. ”This is a crisis that neither Pakistanis nor the world can afford to ignore any more.”