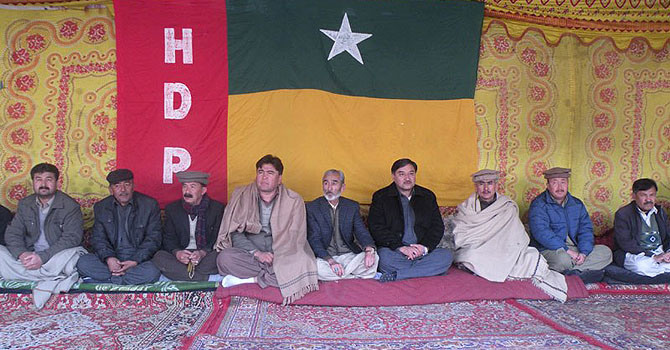 After over 48 hours since it started, the sit-in on Quetta’s Alamdar Road staged by hundreds of members from the Hazara Shia community continues on Sunday.

The demonstrators, while refusing to bury their loved ones, began the protests shortly after a series of blasts rocked Quetta on Jan 10, 2012, killing over 100 people, mostly from the Hazara community.

In a conversation with Dawn.com on the current situation in Balochistan’s capital, chairman of the Hazara Democratic Party (HDP), Abdul Khaliq Hazara, who is currently observing a three-day-long hunger strike in Quetta to draw attention to the Hazaras’ plight, said that the government and law enforcement agencies’ failure to stop the ‘genocide’ of the community amounted to complicity. A similar stance was also previously highlighted in a recent HRW report on Balochistan.

The HDP chief described the government’s performance as indicative of the fact that there were black sheep within the government and the security personnel who supported those responsible for the targeted killings of members of the Hazara community. He claimed that there had been neither any arrests nor other developments in any of the cases involving the victimisation of the Hazara community. Hazara said in his view the authorities’ negligence and incompetence amounted to complicity.

The HDP chief moreover told Dawn.com that the laws were being applied only to persecute the poor and helpless and not to bring to account those behind the kidnappings for ransom and robberies rampant in Quetta. He further alleged that such incidents could only occur at the behest of those who wielded power and influence.

In response to a question over his thoughts on a possible solution to the problem, the HDP chief said: “Those in charge of affairs — under whose watch the situation has deteriorated to the current level — need to be replaced immediately. Moreover, only a military-supervised targeted operation along the same lines as the Lal Masjid, Swat and Karachi operations could help eliminate the handful of individuals responsible for such incidents. Why should Quetta be an exception?”

“Quetta was a metropolitan city consisting of multicultural and religiously-tolerant citizens,” reminisced the HDP chairman. “It is not as vast in terms of area as other major cities but some elements are trying to destabilise the situation and push the people into a state of anarchy and civil war.”

He said he feared that the Hazara community, which has “always held a non-violent approach” within constitutional perimeters, was being pushed into violence through the Talibanisation of its lands and the involvement of other extremist elements.

When questioned whether he thought the protests and sit-ins staged in Quetta could be a risk to the Hazara community, he said: “We have no other choice but to resort to these methods. The risk exists in our daily lives. At least, this way our plight is being highlighted and some awareness is being created.”

Speaking on the reaction and show of support by the civil society over the Quetta bombings, he said it was due to the awareness that had been created on the recent events that people who were educated and from the middle class were choosing to involve themselves in the cause.

He said the awareness of the plight of the Hazara community in Quetta did not come easily nor overnight. Hazara also referred to the protests being held by members of the community in 36 major cities of the world. Earlier in Dec 2012, a conference held in Gothenburg, Sweden had adopted a resolution asking the Swedish government and European Union to put pressure on the Pakistani government to protect ethnic and religious minority communities.

Also, the British House of Commons had, on Nov 19, hosted a similar conference which was attended by 20 MPs.

Before the HDP chairman could be questioned on the suspected motives behind the attacks against the Hazara community, Abdul Khaliq Hazara said: “We are peace-loving people, why would anyone want to target our hapless community”.