You are at:Home»Human Rights»For Some, Quetta Is A Volatile Prison 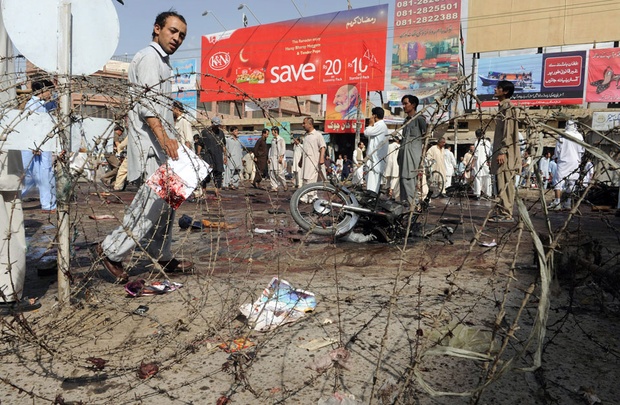 BANARAS KHAN/AFP/GETTY Shiites gather at the scene of another sectarian attack. The Pakistani military have been accused of, at best, doing little to stop attacks on Hazaras, and at worst, being directly linked to them.
Human Rights

For Some, Quetta Is A Volatile Prison

By Admin on December 20, 2012 0 Comments
BANARAS KHAN/AFP/GETTY Shiites gather at the scene of another sectarian attack. The Pakistani military have been accused of, at best, doing little to stop attacks on Hazaras, and at worst, being directly linked to them.
Share this story

Once a haven for refugees from Afghanistan, the Pakistani city of Quetta has turned into a deathtrap. Many see escape to Australia as their only hope.

For years, the Pakistani city of Quetta has been studded with billboards put up by Australia.
When a suicide bomber detonated himself in a Shia Muslim rally on September 3, 2010, killing more than 70 people, photographs of the carnage showed one of these signs in the background. Behind the welter of torn bodies, black smoke and sheared metal, the message was clearly visible: “All illegal routes to Australia are closed to Afghans.”
This city near Afghanistan has long been a transit point for would-be asylum seekers from across the border, many of them Shia Muslim ethnic Hazaras. The Afghans would enter, make contact with smugglers and arrange documents, and head on to Australia. Many of those in transit would stay with relatives among the half-million-strong local community of Hazaras who have settled in the city over more than a century — seeking refuge from waves of massacres and oppression in Afghanistan.
But Quetta is no longer a haven. Recent years have seen a dramatic rise in the killing of Hazaras and other Shias by the extremist group Lashkar-e-Jhangvi, which is allied to the Taliban. The killers, who often strike in the daytime and brazenly leave their faces exposed, carry out their work with little hindrance from the authorities. Some allege they have state support.

Quetta has now become a place that Hazaras are desperate to leave.
Syed Ahmed last saw his father, Syed Ewaz, alive on September 16, as he headed to work.
“My father woke up early in the morning. He was smiling and said ‘Goodbye, I’m going to my shop,’” recounts Ahmed, who lives in Mehrabad, one of two Hazara enclaves in town. “Later on, we were picking his body up from the hospital.”
Ewaz traveled by rickshaw to his tyre shop in an ethnically mixed part of town. As he was setting up for the day, four masked gunmen entered the market and homed in on four Hazara-owned shops. Identifying the Hazaras by their distinct east-Asian faces, the gunmen executed one person in each shop, casually walked back to their motorbikes and drove away. The attack took minutes.
Hazaras have been the targets of such attacks for more than a decade, but recently these have become much more frequent. More than 100 people have been killed this year. It is almost unheard of for anyone to be brought to justice for the attacks. The one exception was the jailing of two militants over a 2003 attack; held in a high-security prison after their conviction, the militants managed to escape in 2008.
Few Hazaras trust the police, soldiers or the paramilitary Frontier Corps, and few are now brave enough to travel freely around town.

“Every Hazara is afraid to go to the bazaar. We’re bound in our areas,” Ahmed explains. “I’m afraid to go to the market, too. I’m afraid of the police and especially I’m afraid of the Frontier Corps. They say they’re security, but they’re part of [the killings], too.”
Ahmed also has lost one cousin and a friend — both drowned at sea on the way to Australia — but he says he would still set out for a boat, if only he could afford it.
The violence in Quetta is tied to the worsening violence across Pakistan’s vast and porous borderlands. In much of the country, militant outfits, created with the sponsorship of the powerful military, have grown and produced splinter groups. Quetta had also been the headquarters in exile for the Afghan Taliban, and its leadership may still be in town. While some of these disparate groups have stayed loyal to Pakistan, others have turned against the government or have simply begun targeting the country’s fragile minorities out of sectarian hatred.
The Global Mail attempted to travel to the city, but a request for permission to visit was never responded to by government authorities, which tightly control the movement of foreigners in the province of Balochistan, of which Quetta is the capital.
The Pakistani government has been involved in a long and brutal battle against an insurgency by the local Baloch, a Sunni ethnic group distinct from the Shia Hazaras. Hundreds of bodies showing signs of torture, allegedly victims of the government, have turned up in the province’s wastelands in recent years.
In Balochistan, many Hazaras believe Lashkar-e-Jhangvi, the extremist group, is being used as a military proxy to tackle the insurgency by fomenting hatred between Sunnis and Shias. The group is well-armed and subscribes to a radical brand of Sunni Islam. Its leader, Malik Ishaq, was released from jail last year and lives openly in the country’s east, in spite of the fact that the group is known to be responsible for hundreds of deaths. According to Lashkar-e-Jhangvi’s world view, Shias are infidels and should die. Hazaras are just the most easily identifiable prey.

Quetta is a small city with a lot of troops and police, but the ability of militants to carry out attacks near checkpoints and military posts suggests they enjoy the support of at least some in the government, says Saleem Javed, a doctor and journalist from Quetta who now lives in Sweden.
“Now how can the Lashkar-e-Jhangvi — which they claim are a few people — how can they come every other day?” Javed asks. “They come inside Quetta city, they kill, and then they escape without being captured.”
As the violence has increased, daily life for Hazaras in Quetta has become dramatically harder, locals say. Up until a few years ago, markets stayed open until midnight, but a series of attacks means they now close at sundown. Shias travelling in buses both around and out of town have, frequently, been stopped, singled out and massacred. The road connecting the two Hazara enclaves of Hazara Town and Mehrabad is now seen by many as too dangerous to travel.
Young Hazaras used to study at the city’s colleges and universities. But in June, a bus carrying students was hit by a roadside bomb, killing six, including five Hazaras. Young people have now given up their studies, or take classes inside their own neighbourhoods. With travel cut off, it is difficult to find work and businesses are suffering. The more fortunate families live off remittances from the estimated 30,000 locals who have moved to Europe or Australia. Many other Hazaras have moved to other parts of Pakistan, but there are fears — borne out by sectarian violence elsewhere — that the number of safe places in the country is dwindling.
It’s true that people are driven to leave Quetta for economic reasons, but it’s the violence and fearing for their lives that drives their economic distress. Travelling to Australia is expensive — at least $10,000-$15,000 — but the safe arrival of one family member can aid the survival of extended families back home, who send their young men, despite the fact that dying at sea may be more likely than being killed by extremists.
“Every mother, every father, they respect their [children’s] life,” says Muhammad Ibrahim, a 28-year-old in Quetta. “They don’t want to put their life in danger. But we are compelled. We don’t have any way to work. We don’t have any way to go outside. Every time … target killing.” Ibrahim tried to travel to Australia but was detained for a year after his boat foundered off Indonesia in May 2011. He voluntarily returned to Quetta to be with his family, six months after his younger brother went missing at sea late last year.
Shaukat Qadir, a retired army brigadier and security analyst, says the militants behind the violence, Lashkar-e-Jhangvi, are not doing the bidding of Pakistan’s military. But he does believe that they have sympathisers among some of the rank and file.
“So if I happen to be in charge of a check post, and I happen to be affected by this extremism, and I think the Shias are [to blame]— it is my duty according to the Almighty to kill Shias — then if I hear some firing I say, ‘Okay, hang on, give them a few minutes, let me finish my cigarette, then we go,’” Qadir says.
From Qadir’s view in Pakistan, it is abundantly clear that violence is driving the Hazaras to leave. No solution to the asylum-seeker problem is possible without dealing with this issue at its source, he argues. “Your problem is the influx of Hazarvis. Okay. You want to stop that from happening. That’s like saying you’re suffering from temperature, take an aspirin,’’ he says.
“The fever is a symptom, it’s not the disease. Unless you get to the disease, the real problem — help Pakistan try and solve that — treating symptoms will not help anything.”