You are at:Home»Human Rights»State blamed for failing to control attacks against Hazaras 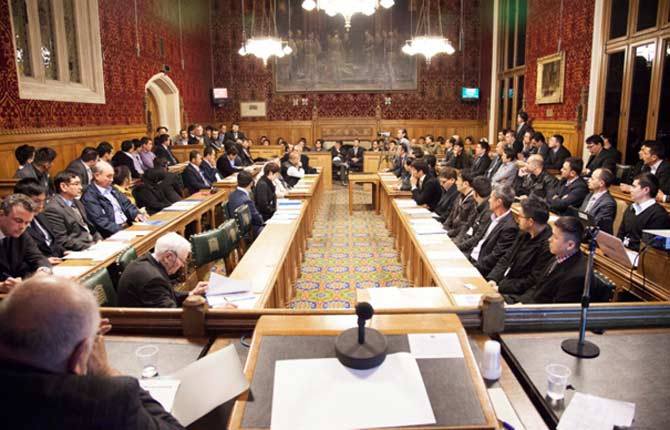 Conference on “Hazara genocide in Pakistan” at the House of Commons in London. – Photo courtesy author
Human Rights

State blamed for failing to control attacks against Hazaras

By Admin on December 15, 2012 0 Comments
Conference on “Hazara genocide in Pakistan” at the House of Commons in London. – Photo courtesy author
Share this story

Saleem Javed
The second and third weeks of November saw an attack on the Shia Hazaras every other day. Conference on “Hazara genocide in Pakistan” at the House of Commons in London. – Photo courtesy author

While the Human Rights Commission of Pakistan has stated that more than 800 Hazaras have been killed since 2001, the figure must surely have gone up given the increasing number of attacks. As it is, around 112 people have been killed and more than 148 Hazaras were injured in 58 incidents in 2012 alone.

Majority of the concerned parties remain aloof to the situation in Pakistan, with the perpetrators of this violence roaming freely. Amidst an increasing sense of insecurity among the members of Hazara community in Quetta, human rights groups and Hazara diaspora have been busy raising the issue in the West.

At a recent conference held in Gothenburg, Sweden aimed at highlighting the “genocide of Hazaras in Pakistan,” more than 200 people were in attendance, including human rights activists and members of civil society.

“The Human Rights Watch believes that Hazara face a double jeopardy due to their sect and ethnicity. This has created a sense of extreme insecurity among the Hazara community, particularly in the city of Quetta,” Hassan said, while speaking to the conference via a video link.

Blaming the state’s inability to deal with the problem, Hassan said: “A third of all Shias killed in Pakistan over last one year are Hazara. Such a disproportionately high number of such a small community has been targeted repeatedly and with impunity.”

While the human rights situation in Balochistan has been deteriorating over the years, the rights watch group’s official said “militant groups, including Lashkar-e-Jhangvi target Shias across Pakistan and Hazaras in particular.”

He said it were the same militant groups that attacked Hazaras in Mazara-i-Sharif of Afghanistan in late 1990s as well and “have found safe haven in Quetta and target the Hazara community.”

Lamenting the country’s inability to improve human rights situations in Baochistan, he told the audience that “this is a collective failure of all the institutions within the Pakistani state including judiciary who is believed to be free but neither brought anyone responsible for the disappearances of Baloch nationalists to justice nor has it even moved to address the issue of Hazaras.”

Pakistani-Swedish political scientist, Professor Dr Ishtiaq Ahmed analysed how “an ideological state based on religion uses religion as a political and strategic tool.”

Whether the law enforcement agencies back such crimes or at least tolerate the killings, the professor was of the view that it was more likely that the mindset which was created for strategic purposes is now out of the control. “You create the monsters but you can’t control them,” he said.

He requested the members of civil society to “send petitions, stage demonstrations and write articles in support of Hazaras in particular.”

A resolution was unanimously adapted at the conference asking the Swedish government and European Union to pressurise the government of Pakistan to protect its ethnic and religious minorities.

John Denham, MP Southampton, Itchen, of Labour Party showing dismay over the lack of attention to this crucial problem, said: “We should use our voices and positions in the parliament to raise this terrible story (of Hazara killings) to a much bigger audience in order to press our government, and through them other governments, to act.”

British human rights activist, Luci Woodland criticised the international media, particularly British media for being biased and keeping mum over Hazara killings in Quetta. She brought to notice that at least 20 Hazaras were target killed in Quetta when the entire British media was covering Pakistani cricketers’ match-fixing case bit-by-bit.

“Hazara students are not able to attend colleges and universities in fear of getting attacked and the community is under siege,” said former British Home Secretary, MP Alan Jhonson He informed the house that despite having discussed the issue in an adjournment debate in the parliament in March and having conveyed their concerns to the Pakistani High Commission in London, the Hazara killings never stopped nor did the government of Pakistan arrest the killers.

At the end Iain Steward, a conservative MP who had sponsored the conference, announced the formation of an All Parties Parliamentary Group which would consist of 10 parliamentarians each from the ruling and opposition parties to follow up “the issues faced by Hazaras in Pakistan to bring an end to the persecution and racial discrimination carried out against the community”

When asked as to why they had to take up the issue with the British politicians instead of Pakistani statesmen, one of the organizers of the conference, Syed Inayat Shah, Secretary General ‘Friends of Hazaras, UK’ said: “We had already staged many demonstrations in front of Pakistan’s High Commission in London. We told Mr Wajid Shams-ul Hassain during one of our meetings that if his government did not take serious initiative to protect the Hazara of Pakistan, then we, British Hazaras, would seek assistance of international community and human rights organisations.”

The author is a freelance journalist and human rights activist from Quetta. He can be reached at dr.saleemjavid@gmail.com