You are at:Home»Refugees»Melbourne: Asylum protesters march in city 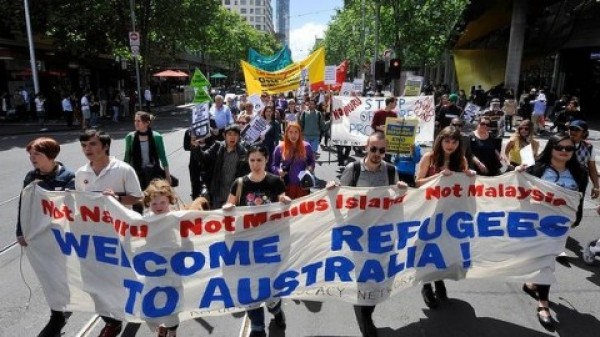 The protest was organised to mark the 11th anniversary since the sinking of regfugee boat SIEV X. Photo: Justin McManus
Refugees

By Admin on October 23, 2012 0 Comments
The protest was organised to mark the 11th anniversary since the sinking of regfugee boat SIEV X. Photo: Justin McManus
Share this story

The protest was organised to mark the 11th anniversary since the sinking of regfugee boat SIEV X. Photo: Justin McManus

PROTESTERS marched through Melbourne yesterday to call on the federal government to abandon its offshore processing of asylum seekers.

A crowd of about 300 – from groups as varied as the Victorian Council of Churches, the Textile, Clothing and Footwear Union and Labor4refugees – rallied outside the State Library before staging a peaceful, sit-down protest that halted traffic on St Kilda Road near Flinders Street Station.

The protest was organised by the Refugee Advocacy Network to mark the 11th anniversary since the sinking of refugee boat SIEV X, which claimed 353 lives. The boat was on its way to Australia from Indonesia when it sank in waters south of Java.

At the rally, deputy Greens leader Adam Bandt criticised the government and the opposition for supporting offshore asylum seeker processing.

He called on the government to set deadlines for each detainee to be processed, and said asylum seekers would always prefer to come to Australia instead of staying in war-torn homelands.
”Unless we make our country as bad as the Taliban [has made Afghanistan], we are always going to be the better option,” he said.

”Labor needs to compromise. Labor’s approach is to try to out-tough Tony Abbott and that’s a battle they can never win. Tony Abbott does not care for refugees.”