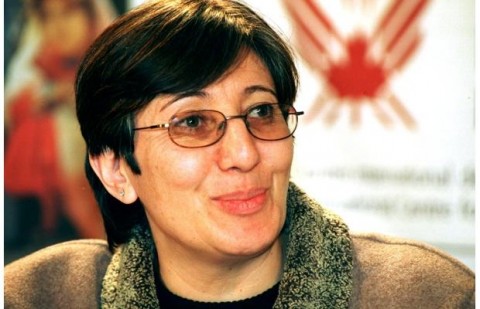 The Jury awards SIMA SAMAR (Afghanistan) “for her longstanding and courageous dedication to human rights, especially the rights of women, in one of the most complex and dangerous regions in the world”.

It is the first time that a Right Livelihood Award goes to Afghanistan.

“…for her longstanding and courageous dedication to human rights, especially the rights of women, in one of the most complex and dangerous regions in the world.“
Sima Samar is a doctor for the poor, an educator of the marginalised and defender of the human rights of all in Afghanistan. She has established and nurtured the Shuhada Organization that, in 2012, operated more than one hundred schools and 15 clinics and hospitals dedicated to providing education and healthcare, particularly focusing on women and girls. She served in the Interim Administration of Afghanistan and established the first-ever Ministry of Women’s Affairs. Since 2004, she has chaired the Afghanistan Independent Human Rights Commission that holds human rights violators accountable, a commitment that has put her own life at great risk.

Sima Samar’s early life
Sima Samar was born February 3rd 1957. Following the Soviet-backed coup, in 1979 her husband, his three brothers and more than 60 other family members disappeared and were never seen again. Sima Samar graduated from Kabul University Medical College in 1982. She then practiced medicine at a government hospital in Kabul, but after a few months was forced to flee for her safety to her native Jaghori where she provided medical treatment to patients throughout the remote areas of Central Afghanistan.

In 2012, the Shuhada Organization also operated 71 schools for girls and boys in Afghanistan and 34 schools for Afghan refugees in Quetta, Pakistan.
During the Taliban regime, Shuhada’s schools in Central Afghanistan were among the few academic girls’ primary schools; the organisation’s girls’ high schools were the only high schools that girls were able to attend in the country. The Shuhada Organization also ran underground home school classes for girls in Kabul. Following the collapse of the Taliban, these home school classes became the basis for two schools for girls that now teach more than 3,000 students and were handed over to the government.

In addition, the Shuhada Organization runs English and computer courses, and income generation and adult literacy programmes for women in Afghanistan and Pakistan. The Shuhada Organization also has established shelters for vulnerable women, which provide a safe living and learning environment for women who have no guardians, are at risk from violence, are poor, and are not able to earn a living. The goal is to provide them not only with shelter and food, but also with opportunities for education and training so that they can have better lives and eventually be able to support themselves.

Achievements in the Interim Administration of Afghanistan

In 2001, Dr. Samar returned to Afghanistan, where she served as the Deputy Chair and Minister of Women’s Affairs for the Interim Administration of Afghanistan from December 2001 until June 2002. Sima Samar was one of only two women cabinet ministers in the transition government. She then was elected as the vice-chair of the Emergency Loya Jirga in 2003.

During the Interim Administration, Dr. Samar established the first-ever Afghanistan Ministry of Women’s Affairs. Under her leadership, the Ministry began advocacy, training and service programmes to help restore the rights of women and to improve their economic, political, legal and social status. Among other accomplishments, the Ministry won the right of women government employees to return to their jobs and to keep their seniority after maternity leave, secured the representation of women as 11% of the Loya Jirga delegates, oversaw the re-entry of girls to schools, and launched a women’s rights legal department.

The Afghanistan Independent Human Rights Commission (AIHRC) was set up in 2002 and constitutionalised in 2004. Samar was appointed its first chairperson. Since its inception, the AIHRC has reported on pressing challenges including issues of civilian casualties, the realisation of economic and social rights and the status of women. One of the most important reports that the AIHRC has published is “Call for Justice” which examines past human rights crimes and abuses in Afghanistan.

AIHRC’s focus has been to strengthen the rule of law and end a culture of impunity. Because of her relentless calls for accountability for human rights violations of the past and the present, Samar is an anathema to many of the human rights violators who hold office in Afghanistan today. Having received several death threats as a result of persevering in her work, Samar is today always accompanied by bodyguards in Afghanistan.

From 2005-2009 Samar also served as the United Nations’ Special Rapporteur for the Situation of Human Rights for Sudan.

Fervently believing that education is the key to socio-economic development and sustaining civil society in countries like Afghanistan, Samar recently established the non-profit Gawharshad Institute of Higher Education (GSIHE). The Institute initially offers training in the fields of political science, political sociology, economic planning and leadership and administration in education. It aims to provide greater opportunities for women, poor and marginalised students through tuition subsidies and scholarships.

Various aspects of Samar’s work have been recognised over the years by a number of international awards, including the 1994 Ramon Magsaysay Award for Community Leadership and the 2004 Jonathan Mann Award for Global Health and Human Rights. Additionally, she was conferred with a Doctor of Humane Letters (hon.) by Brown University in May 2005.

Quotation
“I was able to establish the Afghanistan Independent Human Rights Commission in a country where using the word ‘human rights’ was counted as a crime. I believe that reconciliation should not be traded for justice and that victims of human rights violations should not again be victims for short-term political gain. We must follow the desires of the Afghan people who oppose amnesty for human rights violators and want to see violators prevented from obtaining government posts and brought to justice. The chronic situation in Afghanistan requires long-term commitment, and the strategy should be comprehensive and multidimensional. Most importantly we have to educate people, which might be the key for a prosperous society including the reduction of poverty and respect for human dignity. I have to say that I think that I have not done exceptional work but the environment that I work in is certainly very difficult.”