You are at:Home»Refugees»Australia»Deportation reprieve for asylum seeker 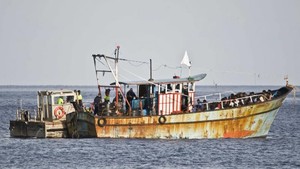 Abbott would appeal against the immigration department granting visas to refugees that came by boat.
Australia

By Admin on September 23, 2012 0 Comments
Abbott would appeal against the immigration department granting visas to refugees that came by boat.
Share this story

WHILE an Afghan asylum seeker won a last-minute court reprieve yesterday against deportation, a group of 18 Sri Lankan men detained on Christmas Island chose to return home rather than be sent to Nauru.
But the Christmas Island detention centre will soon fill up. Last night 180 people were transferred from a boat about 100 kilometres off the Indonesian coast to an Australian navy ship and a number of merchant vessels.

”[Those] who boarded the Australian navy vessel will most likely be transported to Christmas Island, while the destination of those who boarded commercial vessels is currently unknown,” said a spokesman for the Australian Maritime Safety Authority.

A Federal Magistrates Court judge overturned the decision by Immigration Minister Chris Bowen to deport a 34-year-old Hazara man on the grounds his application for refugee status was misconceived.

He was scheduled for deportation at 2pm today. It would have been the first forced eviction of an asylum seeker to Afghanistan.
The matter was adjourned to a hearing in October. The judge told the court: ”It has never been explained to me why there is a particular urgency [to deport the man].”
Lawyers for the man sought the injunction on the grounds that he had not exhausted his appeal rights.
Meanwhile, most of the 18 Sri Lankan men who have chosen to return home rather than be detained on Nauru arrived after the government announced its new policy. They were sent back to Colombo on a charter flight yesterday morning.
”Both the Nauru transfers and this group of adult Sri Lankan men choosing to return home provide further evidence that the people-smugglers are selling lies and misleading asylum seekers about the situation they will face if they reach Australia by boat,” Mr Bowen said.