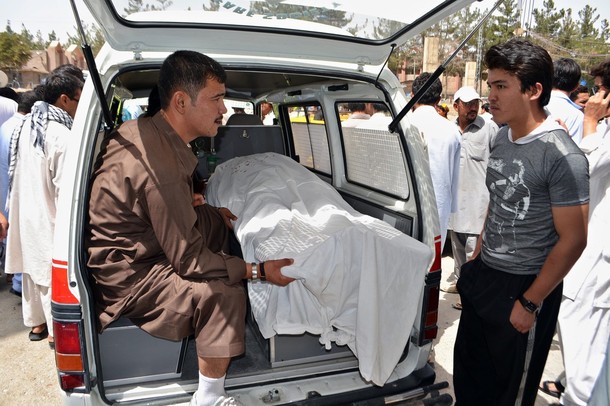 Human Rights Watch has expressed concern about increasing violence against the minority Shia Muslim community in Pakistan and asked the government in Islamabad to protect it from sectarian attacks by Sunni militant groups.

“Deadly attacks on Shia communities across Pakistan are escalating,” HRW’s Asia director Brad Adams said. “The government’s persistent failure to apprehend attackers or prosecute the extremist groups organizing the attacks suggests that it is indifferent to this carnage,” he added.

“While sectarian violence is a longstanding problem in Pakistan, attacks against ordinary Shia have increased dramatically in recent years,” said HRW, one of the world’s leading independent organizations dedicated to defending and protecting human rights.

In 2012, at least 320 members of the Shia population have been killed in targeted attacks. Over 100 have been killed in Balochistan province, the majority from the Hazara community. Against this backdrop, the New York-based HRW said: “The government should hold accountable those responsible for ordering and participating in deadly attacks targeting Shia.”

The fact is that while authorities claim to have arrested dozens of suspects in attacks against Shia since 2008, only a handful have been charged, and no one has been held accountable for these attacks.

Human Rights Watch welcomed the August 31 arrest of Malik Ishaq, the leader of Lashkar-e-Jhangvi, in Lahore in a case filed against him for inciting violence against the Shia community on August 9 and described it as “an important development, coming after repeated failed attempts to bring him to justice”.

Despite being the accused in some 44 cases, involving the killing of some 70 people, mostly from the Shia community, Ishaq has previously been acquitted by Pakistani courts in 34 cases and granted bail in the other 10.

The government recently detained him under provisions of the Maintenance of Public Order Act as it deemed him to be a threat to public security. A review board of the Lahore High Court ordered his release in January 2012 on the grounds that Ishaq’s continued detention was unjustified because he had been granted bail in all cases pending against him.

“The arrest of Malik Ishaq, who has been implicated in dozens of killings, is an important test for Pakistan’s criminal justice system,” Adams said. “Sectarian violence won’t end until those responsible are brought to trial and justice.”

Indiscriminate Killings
According to HRW, in the most recent violence, in two separate attacks on September 1, 2012, gunmen attacked and killed eight Hazara Shia in Quetta, Balochistan’s capital. In the first attack, witnesses told Human Rights Watch that four armed men riding on two motorbikes shot dead five Hazaras at a bus stop in the Hazar Ganji area of the city.

The victims, all vegetable sellers, were returning from the vegetable market. Within two hours of the attack, gunmen riding a motorbike attacked a nearby bus stop, killing two people from the Hazara community. An eighth victim, also a Hazara Shia, died in the hospital on September 2.

On August 30, gunmen riding a motorbike shot dead Zulfiqar Naqvi, a Shia judge, his driver, Essa Khan, and a police bodyguard, Abdul Shakoor, as Naqvi headed to work in Quetta.

On August 16, 2012 four buses passing through the Babusar Top area of Mansehra district in Khyber Pakhtunkhwa province (formerly the North-West Frontier Province) were ambushed by gunmen who made all the passengers disembark. The attackers checked the national identity cards of each passenger and summarily executed 22 passengers identified as belonging to the Shia community. A spokesman for the Tehrik-e-Taliban Pakistan, the Pakistani Taliban, claimed responsibility for the killings.

HRW said: “Sunni militant groups such as the ostensibly banned Lashkar-e Jhangvi have operated with widespread impunity across Pakistan while law enforcement officials have effectively turned a blind eye on attacks against Shia communities. Some Sunni extremist groups are known to be allies of the Pakistani military, its intelligence agencies, and affiliated paramilitaries, such as the Frontier Corps.”

Human Rights Watch urged Pakistan’s federal government and relevant provincial governments to make all possible efforts to promptly apprehend and prosecute those responsible for recent attacks and other crimes targeting the Shia population.

The organisation called upon the government to direct civilian agencies and the military responsible for security to actively protect those facing attack from extremist groups, and to address the growing perception, particularly in Balochistan and Pakistan’s tribal areas, that state authorities look the other way when Shia are attacked.

In particular, HRW said, the Pakistani government should increase the number of security personnel in Shia majority areas and enclaves at high risk of attack, particularly the Hazara community in Quetta. The government should also actively investigate allegations of collusion between Sunni militant groups and military intelligence and paramilitary forces and hold accountable personnel found to be involved in criminal acts.

“Pakistan’s government cannot play the role of unconcerned bystander as the Shia across Pakistan are slaughtered,” Adams said. “Pakistan’s political leaders, law enforcement agencies, judiciary, and military need to take this as seriously as they take other security threats to the state.”