You are at:Home»Refugees»Australia»For Mahdi, 17, second attempt to make new life ends in tragedy 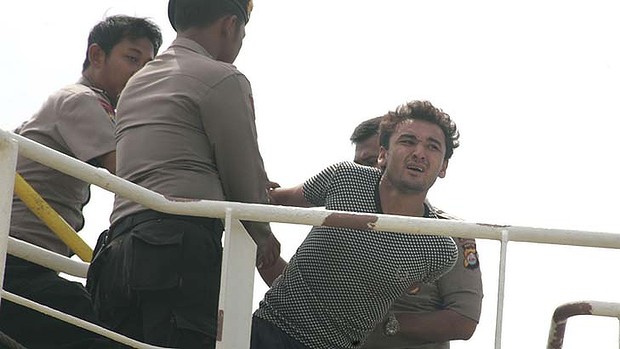 The voyage ends in heartache and frustration ... an asylum seeker is forced off his boat in the Indonesian port of Merak in April. Photo: AFP
Australia

By Admin on August 30, 2012 0 Comments
The voyage ends in heartache and frustration ... an asylum seeker is forced off his boat in the Indonesian port of Merak in April. Photo: AFP
Share this story The voyage ends in heartache and frustration … an asylum seeker is forced off his boat in the Indonesian port of Merak in April. Photo: AFP

For at least one of the Afghan asylum seekers on board the wooden boat that sank on Wednesday morning, it was the second disastrous attempt to get to Australia.
Mahdi, known as John Cina, was a 17-year-old Hazara from Haidar, Afghanistan. He was the sole breadwinner for his mother, brothers and sisters. He felt he had no choice but to try to make a life in Australia.
Now he is missing – as are hundreds of his countrymen who have disappeared in the rough seas of the Sunda Strait between Sumatra and Java in recent times – and is presumed dead.
Mahdi knew better than most the dangers of this trip. In early April he had embarked on another boat to make the same crossing, but it foundered.

He and the 120 others aboard were lucky enough to be rescued that time by a Singaporean vessel. They were returned to the port of Merak and for a day they refused to get off, demanding passage to Australia. After spending hours in the sun without food, toilets or shelter, the Indonesian police dragged them, some crying and beating their heads bloody, off the ship.
He and the others were taken to the Tanjung Pinang detention centre on Riau Island off Sumatra. There, says Ali Reza, another 17-year-old from the boat, the authorities were “killing people by [wasted]time”.
So Mahdi, Ali Reza and dozens of others escaped. Some were recaptured and, according to Ali, badly beaten. But the two friends got away, fleeing to Cisarua, western Java, to wait for another boat.
Despite the change in Australia’s law, despite the threat of three years in limbo on Manus Island or Nauru, and despite the serious threat of death at sea, they were still determined to make the voyage. Mahdi had travelled from Kabul to Dubai, then to Thailand, Malaysia and finally to Indonesia. He would not turn back.
“He was saying my family doesn’t have a financial supporter, I must get to Australia as soon possible to help my family,” says Ali Reza, who is still in Cisarua. “It was by this logic that he escaped from the detention centre and took that risk.”
Mahdi might be among the few survivors plucked from the sea yesterday. But the chance is that this young man’s journey has reached its end.
Just a handful of survivors were returned to Indonesia last night from a boat carrying 150 or more asylum seekers which had foundered only kilometres from the coast of Java on the way to Christmas Island. It had left Indonesia on Tuesday.
The tragedy indicates asylum seekers in Indonesia are making good their pledge to try to reach Australia despite the new laws passed by Parliament last week.
Sources said the boat was organised by a Pakistani people smuggler known as Haji Gholam, or Mamad, who is 25 and has been in the trade for about three years.
Recently, smugglers have increased the price for passage, saying those who pay more will go first in an attempt to beat the new Australian laws.
The bulk carrier APL Bahrain diverted from its Malaysia-Fremantle course and retrieved six asylum seekers from the ocean about 3.30am AEST just as the captain was preparing to abandon the search.
The captain, Manuel Nistorescu, said he saw what he believed were corpses in the water with the survivors.
Captain Nistorescu said the rescued men were young and all said they were from Afghanistan and trying to reach Australia. They said they had been in the water since about 7am on Wednesday.