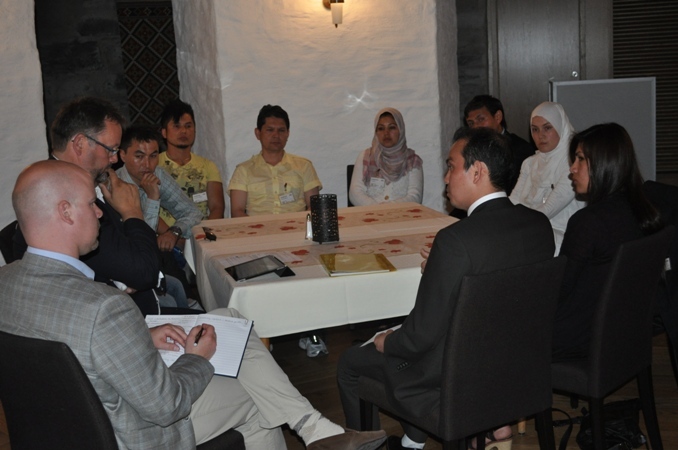 On July 5, 2012, a delegation of Hazara citizens of Norway met Mr. Svein Harberg and Mr. Audun Halvorsen. Mr. Svein Harberg is a member of Norwegian parliament representing Aust-Agder in the parliament and Mr. Audun Halvorsen is a political advisor and they are from Conservative Party Parliamentary Group Norway. The meeting took place within the Norwegian Parliament.
Mr. Ali Raza and Ms. Manizha, representing the Hazara delegation, described the plight of Hazaras in Afghanistan in general and Pakistan in particular. Manizha, an Afghan-Hazara, now living in Norway who also lived in Pakistan as refugee, discussed the plight of Hazaras over the face of history. In Amir A. Rahman’s regime in Afghanistan, Hazaras faced genocide of its worst kind, getting 63% of the total Hazara population killed. Thousands of Hazaras escaped from Afghanistan in the neighboring countries Iran and Indian sub-continent (Today’s Pakistan). Manizha also described the miserable condition of Hazaras in Iran and Pakistan, stating her bitter experiences as refugee in Pakistan.
Ali Raza, a Pakistani-Hazara, explained how Hazaras, being citizens of Pakistan, have contributed in the progress and prosperity of Pakistan. Despite the fact that Hazaras have contributed to the society in the fields of Education, Services, Arts, Business and Sports, the minority ethnic-community owing to its Shia-faith has been on the receiving side of decade long violence and discrimination. The noteworthy characteristic of the issue is that this violence is absolutely one-sided and a lone militant outfit Lashkar-e-Jhangvi, a Taliban-affiliate has launched its ‘holy jihad’ against the minority Hazara community without any recorded retaliation from the besieged community. Another noteworthy feature is that despite the number of people murdered rising to as high as 800, the government, Law-enforcing-agencies LEA and the judiciary of Pakistan, both on provincial as well as federal levels have failed to bring a single perpetrator of these crimes to verifiable justice. He said that Hazaras despite being law-abiding citizens is an oppressed community in Pakistan and facing systematic-genocide. “… From 1999 till date more than 800 Hazaras have lost their lives and yet not a single perpetrator has been arrested and brought to a verifiable justice”, he added. He also named some of the prominent personalities including Olympian boxer Syed Abrar Hussain Hazara who won many international titles for Pakistan, was shot dead on June 16, 2011 in Quetta.
Lashkar-e-Jhangvi, a religious militant terrorist group, also a Taliban-Al-Qaeda affiliate and has sympathies from elements in the provincial and federal government, has always proudly accepted responsibility for these brutal attacks. In the year 2012, LeJ had even thrown flyers in the houses located in Hazara neighborhoods, warning Hazara to quit Pakistan well before 2012 or get ready to face the consequences. LeJ openly holds public demonstrations in the mainstream cities, even in Islamabad right under the nose of the officials responsible for safety of the citizens. Lej audaciously states its mission to make the Pakistan graveyard of more than a half million Hazaras. Government of Pakistan is either incompetent or complicit and so apparently has failed to put an end to the continued systematic genocide of Hazara community, perpetrated in the form of regular massacres.
The delegation requested Mr. Svein to raise the issue on the floor of Parliament and demanded the government of Norway to pressurize the government of Pakistan to take measureable steps to provide security to the law-abiding Hazara citizens. They also demanded Norwegian government to consider the Hazaras for asylum as a very special case.
Mr. Svein and Mr. Audun promised to raise the issue in the parliament and talk to foreign ministry of Norway in this regards. The delegation thanked Mr. Svein Harberg and Mr. Audun Halvorsen in sparing time for the meeting out of their busy schedule.