You are at:Home»Refugees»Australia»As 108 Drowned, They Cried: ‘Pray For Us’ 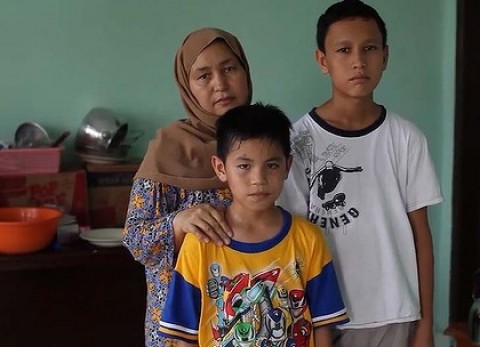 After a nine-month investigation, Natalie O’Brien reveals the true story behind the deaths of 105 asylum seekers and three crew – and the failure of Australian authorities to alert rescuers.
‘There is a storm coming. There are big waves coming for us. Pray for us, pray for us.” These were the terrified last words from among 105 Hazara asylum seekers as their boat sank in rough seas just hours into their voyage from Indonesia to Australia.

Passengers had called their friends back in Indonesia. They left the call open as they went to their deaths.
”There was just screaming and crying and the sound of waves crashing on the boat, as it went down, drowning the men, women, and children,” said Nazir Hussein Rezai, whose sister and nephews were on board.

Advertisement: Story continues below ”Some of the passengers had called their friends, and they did not switch off their mobile … Their friends had to listen to their dying moments. It kept going until the water silenced the phones.”

Nazir, now living in Rockhampton, learnt the fate of his sister Fatima nek Bakht and her sons, Mujtaba, 11, and Asif, 13, when he rang other asylum seekers in Indonesia desperately trying to find out why his family never arrived in Australia.

It was about midnight on Friday October 2, 2009, when the fishing boat slipped quietly out of an undisclosed Indonesian port and headed out to sea, bound for Christmas Island.

Also on board was Mirza Hussain Jaffari, 26, who called his family in New York from his mobile to say he was on the boat and on his way to Australia. He reassured them the boat was new. There was nothing to worry about. With him, he said, were three Indonesian crew and another 104 Hazara asylum seekers from Afghanistan, mainly families with children.

They sailed through the night down the Indonesian coast, trying to avoid detection. Little did they know their journey was being monitored by spies planted in the people-smuggling networks who were reporting to the Australian Federal Police. Their movements had already been the subject of intelligence reports to Australia for six days before they even boarded the boat.

By early the next morning, a secret report – now obtained by The Sun-Herald under freedom-of-information laws – was sent to the Customs and Border Protection Command headquarters in Australia. It advised that the boat, associated with a people smuggler known as Sajjad Hussein, had ”possibly” departed and was heading for Christmas Island.

The weather in Jakarta that day was fine and 32 degrees. But the region had been rocked by devastating earthquakes and a tsunami in the two days before they left. Judging by the phone calls made from the boat that day, the further it travelled the rougher the seas became.

Scared and upset, some passengers phoned the boat’s organiser in Indonesia, a man named Hijazi or Farman Ali, pleading with him to let the boat turn back. But the people smuggler ordered the captain to push ahead, passengers told their relatives in later phone calls.

As the boat was buffeted by the storm, there were many mobile phone calls made from the vessel indicating that it was still close to land. Among them was one from the boat to people on Christmas Island. A handwritten note, obtained under FOI from the Australian Maritime Safety Authority, revealed that some of the calls were ”overheard” and reported to the authorities. But it has never been revealed whether police were tapping those calls or someone on Christmas Island was informing the authorities.

An official timeline obtained from Customs shows it was some time just before midday that Saturday that disaster struck. One of the spies associated with the organisers called their AFP contact and said the boat was in trouble and taking on water.

Such an emergency, a sinking boat with more than 100 people on board, should have triggered an immediate response – a referral to the Australian Maritime Safety Authority and a general call to any ships in the area to go to their aid. But it didn’t.

Instead, as the FOI documents show, Australian Customs and Border Protection decided to ”commence usual SIEV [suspected irregular entry vessel]response to contact”. It added, in brackets: ”if it continues towards Christmas Island”.

Almost four hours passed before the potential tragedy was even flagged to maritime safety and a search-and-rescue mission was mounted. The nearest Australian navy boat at that point was 360 nautical miles away. It would be yet another three hours before an Indonesian navy boat reached the stricken boat’s position – and apparently found nothing.

Among others aboard the fishing boat were two brothers, Mohammed and Karim. There was also a widow, Golafroz, and her son, 17-year-old Sajjad. They had been interviewed while they were still waiting to board a boat in Indonesia by the Australian lawyer turned filmmaker Jessie Taylor, for her documentary Between the Devil and the Deep Blue Sea. Golafroz told Taylor her husband and two other sons had died in Afghanistan. Fatima nek Bakht told Taylor the Taliban killed her husband and five of her children, so she had sold everything she owned to get out of Afghanistan and onto a boat that would take her and her surviving boys to safety.

While the passengers clung on, hoping they would be rescued, it was not until 3.32pm that the AFP and Customs agreed to tell maritime safety there was a life-threatening emergency and release the boat’s co-ordinates. The almost four-hour delay was caused because the AFP and Customs did not know how to reveal they knew the boat was in trouble without revealing it was a tip-off from an AFP source in Indonesia.

The official timeline shows that when the maritime authority was told it immediately swung into action, emailing and faxing Coastwatch and the Indonesian search and rescue agency known as BASARNAS.

At first it was believed the boat was just 100 kilometres north of Christmas Island, but then the co-ordinates were given. They were very precise – 0655S 10458E. The position placed it in a three-square-kilometre radius near the Sunda Strait, and still just 17 nautical miles offshore from Java.

Indonesian search and rescue advised Australia’s maritime safety that it would send an Indonesian navy boat to the location to search. But when it got there, seven hours after the AFP was tipped off, it sent a message back saying it ”could find no accident at that position”.

There was also a curious message sent to the Australian rescue co-ordination centre from Customs: ”Indons don’t believe that situation is a SAR [Search and Rescue] situation, after investigations.”

However, by the accounts of relatives, passengers had sighted what they thought was an official Australian vessel. Not long before the boat appears to have sunk, relatives had received a call from passengers. They could see a ship and they thought it was the Australians coming to rescue them. The passengers said they were going to throw their mobiles overboard and would get in contact again once they reached Christmas Island.
It remains a mystery whose ship they saw and why it did not help.

That evening, the Australian embassy in Jakarta effectively called off the search by telling maritime safety it had been told by ”diplomatic channels” the boat was no longer in a ”distress situation”. Border Protection aircraft flew surveillance flights from Christmas Island towards the boat’s last reported position later that night and did report seeing ”numerous contacts [boats]detected in the search area, however no vessels detected in distress”.

But two days later, on October 5, and then again on October 7, the AFP again received secret information about the ”status of the venture” and the intended arrival point and passed that to Indonesian police to try to find it. The AFP has never revealed what it was told. On October 27, the Indonesian police’s people smuggling taskforce, known as SATGAS, detained in Jakarta the alleged smuggler Sajjad Hussein, also known by his nickname Pisshi. Last month the Australian case against Hussein collapsed. The Commonwealth Director of Public Prosecutions withdrew its application to extradite him. He was released by Indonesia and deported to Pakistan.

By early December, families were making frantic calls to the people smugglers, demanding to know what had happened to their relatives – only to be reassured that the boat had arrived safely in Australia and they should make the final payments. The network of smugglers then disappeared, and confused relatives began travelling to Indonesia and around Australia trying to locate the missing.

Back in Australia, says Taylor: ”Families and friends of passengers on the boat called me [from Indonesia]to say that a group of people had got on a boat which had never arrived anywhere, nobody had been heard from in weeks, and they’d heard rumours that it had been lost at sea … The worst seemed to be confirmed by the deafening silence from every passenger known to be on the boat.

”I found out the names of specific people who had been on the boat whom I’d met a few months earlier. … It just confirmed the arbitrariness of who makes it and who doesn’t … It’s a lottery, and it should not have to happen in such a terribly dangerous way.”

For Nazir Hussein Rezai, knowing what happened to his sister and nephews never ends. The Hazara, who fled Afghanistan leaving everything behind, only yesterday took email delivery of a photo of his sister and sons. It is at least something to remember them by.