You are at:Home»Refugees»Australia»The world turns a blind eye to killing of Hazaras in Pakistan 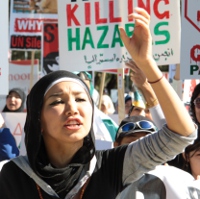 Imagine if the targets of Sydney’s drive-by shootings were not members of feuding bikie gangs but people singled out by virtue of their appearance to be shot dead while travelling to work by bus or car, shopping, attending a medical appointment or visiting relatives. It is beyond comprehension to imagine such a situation. Yet that is exactly what is happening to Hazaras in Pakistan. In recent years, armed terrorist groups have been targeting ordinary Hazara men, women and children on a weekly basis in Quetta, Pakistan. Over half a million Hazaras feel terrorized by these frenzy killings.

That is why on 10 May, over a thousand Hazara-Australians gathered in Canberra to protest against the systematic targeting of attacks on the Hazara community in Quetta, Pakistan. Men, women and children travelled by buses and cars from Melbourne, Adelaide, Brisbane and Sydney. Marching from the Australian Parliament House to the UN office and then the Pakistani embassy, they chanted ‘we want justice,’ ‘we want security,’ ‘Hazara rights are human rights,’ and ‘why is the UN silent’?

The march was one of series of rallies organised by Hazaras around the world in the past few weeks; in Afghanistan, Pakistan, UK, Holland, Denmark, Norway, Italy, US, Canada and New Zealand.

A similar world-wide protest was organised last year but it fell on deaf ears. None of the world leaders, including Australia, have come out to condemn publically the terrorist attacks on innocent Hazara people in Pakistan.

The protest last week demanded the Australian government, public, and media to take notice of the genocide being perpetrated against Hazaras and pressure the Pakistani authority to crack down on terrorist groups.

Yet, the mainstream media in Australia has largely been silent in covering on this issue except SBS radio. Although there are a significant numbers of Hazaras in Australia they are frustrated that the plight of their family and friends in Pakistan is being ignored. The Hazara community in Australia is deeply affected by the situation in Pakistan and Afghanistan, now they are trying to show solidarity to those left behind through non-violence means.

It is this feeling of frustration and hopelessness that has taken so many Hazaras again onto the streets of many countries this year again.

Many of the Afghans seeking asylum in Australia and those already accepted fled persecution at the hands of terrorist groups either in Pakistan or Afghanistan.

As a Hazara from Afghanistan, I came to Australia in 2001 and have travelled to Pakistan twice since then. Each time, I witnessed violent attacks on Hazaras. The deadliest one was in September 2010 in which over 70 Hazaras were killed and over 200 wounded in a suicide bomb attack in Quetta. The house of my own relative, Ramzan Ali, was attacked by terrorists last August, killing over 12 people and injuring a few dozens. His family cowered under the rubbles miraculously survived.

However, in the past two years, the tactics have changed from suicide bombing to shootings where unknown gunmen fire on cars and buses that carry Hazara passengers.

There are nearly 600,000 Hazaras in Quetta some of whom had fled persecution in Afghanistan a century ago. There are also so many who have come to escape the Taliban. They are living in a state of terror and fear, waiting for the next moment to pass without incident. They are besieged in their own homes and areas.

Attacks since 2001 have produced a staggering human toll -over 700 have been killed and nearly 2000 injured. Not a single perpetrator who has been brought to justice by the provincial Baluchistan government. In fact, the Pakistani government is involved with the attackers. The Asian Human Rights Commissionimplicate Pakistan’s secret agency, the ISI, in financing and collaborating with terrorist organizations in Baluchistan, ‘Their main tasks include counter-insurgency, spread of Talibanization, sectarian violence, killings of Hazaras and Shias, attacks on NATO supply routes and targeting journalists and lawyers.’

The Chief Minister of Baluchistan, Nawab Raisani, has shown no sympathy for Hazara victims in the province for which he is responsible. He said in a recent comment to the media addressing the bereaved families ‘We will send over truckloads of tissue paper, so they can wipe out their sorry tears.’

In recent years, Quetta has become infested with extremist groups.After the collapse of the Taliban in 2001, Quetta which lies on the border of Afghanistan, has become a safe haven to Quetta Shura and members of the Taliban leadership including, Mullah Ommar.

Another terrorist group that freely operates in Quetta is Lashkar-e-Jhagavi (LeJ). The group has been responsible for violence against Hazaras.It is a banned by the UK, US and the Australian government.

This militant group shares strategic and ideological goals with the Taliban in Afghanistan. They consider that the Hazaras are not Muslim and their killing justified. LeJ distributed leaflet in Pakistan saying:

Just as our fighters [referring to the Taliban who massacred Hazaras in Afghanistan]have waged a successful Jihad against the Shiite Hazaras in Afghanistan, our mission in Pakistan is the eradication of this impure sect and its followers from every city, every village and every nook and corner of Pakistan.

There has been a spate of sectarian violence and terrorist attacks gripping the whole of Pakistan, targeting other minority groups like Ahmadi and Baluch. However, the Hazara situation is quite different for two reasons.

First, Hazaras, are easily identifiable because of their distinctive facial Mongol features. Last year in September, a group of 29 Hazaras travelling on a bus en route to Iran were forced to get off, leaving the non-Hazaras passengers, then lined up and shot in Mastung, Quetta.

Second, the Hazara are Shiite in a predominantly Sunni country. They have been attacked by Sunni extremist groups that view the Shiite as heretics. There are other ethnic groups in Pakistan who are Shiite (Shiite represent about 20% of population in Pakistan) but Hazaras bear the brunt of most the attacks in recent years because of their ethnicity (appearance).

The Sunni extremist ideology in Pakistan was cultivated under the military dictatorship of General Mohammad Zia ul-Haq, 1977 to 1988, with the support of the United States to bolster fight against the Soviet Union. Zia Ul-Haq also had other purpose in mind in supporting the Sunni extremists; it was to counter the influence of Iranian 1979 revolution.

Also the Hazaras have been victims of regional players pitted one group against another. Saudi Arabia has been funding extremist Deobandi Sunnis and Wahabis in Pakistan since the Afghan Jihad while Iran supporting the Shiite militant groups such as Sipah-e-Muhammad. They were in fierce battle, attacking each other, causing many deaths.

Haqqani, the former ambassador to the US wrote in New York Times last week that Pakistan is the only country in the world that commemorated the anniversary of Osama Bin Ladin’s death.Thus we should all be concerned about the violence in, and the future of, a nuclear armed Pakistan. No one wants to see the terrorist groups who got free reign in Pakistan to get hold of nuclear bomb. Unimaginable things would happen.

The plight of Hazara maybe invisible to the world as they are not in the headlines but what is unfolding in Quetta is genocide with the implications for peace far beyond Pakistan. Hazaras stretch out their hands to the world and hope the human rights groups, governments and peace loving people will act soon before it is too late.