This April has been the month of extreme suffering and extra mourning for the Hazaras in Quetta; they have lost many of their dearest ones in the... 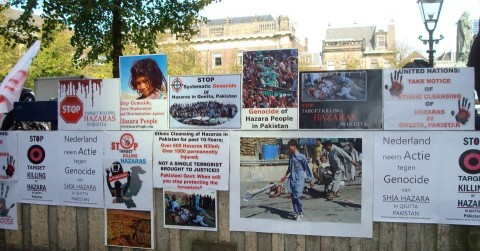 This April has been the month of extreme suffering and extra mourning for the Hazaras in Quetta; they have lost many of their dearest ones in the terrorist target killings of the Hazaras in this city.

Saturday 14th April Quetta witnessed three different attacks on Hazaras in which 9 innocent were killed; it was only a day after Hazaras’ grand protest in Quetta that shut down the whole city.

Before that, three merchants were shot dead in their shops in Kandahari Bazaar downtown Quetta on Friday April 13th, a crowded commercial area with a distance of four hundred meters from the central city police station but still no traces for the murderer terrorists.

Six other shopkeepers were killed in downtown Quetta on Monday 9th April and four others were heavily injured on Prince Road near Science College area where there are always police patrols but still no one was captured for the bloody attack.

In a-three-weeks distance, four purposeful target-killing attacks took place in which twenty five innocent Hazaras were being killed and around thirty were left wounded.

In spite of Hazaras’ massive carnage in Quetta, none of the terrorists are captured yet neither the government of Pakistan has taken safeguarding measures for the Hazara victims after all these series of armed attacks on them.

While this process goes on, the surprisingly silence of human rights organizations in Quetta remains another enigma on the other part. This questionable silence of HR organizations makes it harder for the defendless Hazaras to tolerate oppressions and bloody killings in silence with no hopes for defense, safeguard or international interference for their rescue.

Since 2008 Pakistan has become a state of fear for the ethnic and religious minority groups. The Hazaras on top of all, as a minor religious and ethnic group, has been the prime victim of sectarian and ethnic genocides for both; for their sect as Shiites and for their race that is apparent on their facial appearances.

Mainly resident in Quetta, the Hazaras of Pakistan are the remainders of historical genocides that forced them find sanctuaries in Quetta during the hard times of Hazaras’ biggest genocide by the Pashtun king Abdul Rahman Khan in between 1880-1890 in Afghanistan.

Based on available historical documents, the Hazaras who once made 67% of Afghanistan Population, losing 62% of their people in the massacres, were diminished to only 5% of the population of Afghanistan during 1880s which caused them a huge diffusion in the neighboring countries such as British India in the East and South, Persia in the West and Russia in the North. So the Hazaras of Quetta has a history of at least more than a hundred years residency in this city.

Later on when India was broken into two and then three parts and Pakistan was born as result in 1947, the Hazaras as Muslims and resident of Quetta remained confident to Pakistan as a new-born Islamic State and there they grew their capacities and demonstrated their abilities in education, leadership and formation of a modern society and this gave them a prestige and credibility before the leaders and senior governmental officials of new born Pakistan.

The progressive Hazaras, once a proud and respected society in Pakistan had played a great role in Pakistan’s development in different sectors especially in the Army and the Air Force thus once they had senior officials and generals such as Gen. Musa Khan Hazara (1908-1991) who was The Army Commander in Chief (of Pakistan), Governor of Balochistan and the Governor of West Pakistan.

In the continuity of their progression, today unfortunately the Hazaras of Quetta are the victims of extremism and terrorism in Pakistan while during the years, Quetta has not only been a place for the growth of Hazaras of Pakistan but also a sanctuary for the Hazaras of Afghanistan who had fled their country for civil war of 1990s.

In the recent years the rapid growth of fundamentalism and the political disorder in Pakistan put the Hazaras under series of attacks by fanatic fundamentalists normally protected by the local police and corrupt senior local governmental officials.

The series of target killings of the Hazaras first began from their political leaders and influential figures in 2008 and up to now continue with the civilians and ordinary people.

As a result of target killings, that are now considered a massacre, more than 600 people are being killed so far and there are no more spaces in Hazaras’ graveyards as people say.

Only in 2011-2012 more than 150 civilian people are being killed by Lashkar e Jhangvi e Sepah e Sahaba members; two extremist terrorist groups earlier banned by the Pakistani government as they had repeatedly condemned the Hazaras and the Shiite to death through their official publications. These two terrorist groups have vowed to eradicate the Hazaras from Quetta.

In Quetta the Hazaras reside in two different sides of the City; Hazara Town is an area in the West and Mehr Abad in the East of the city, in addition the Hazaras have many businesses in the markets of the city center. The consequences of the target killings are even worse; it has restricted people’s movements and has taken away their safety when they move from one part of the city to the other.

According to people’s sayings, nowadays in Quetta, nobody is sure of a safe return home when he/she moves out of home. The fear has overshadowed everywhere. Not only the elders but even the young primary school students who have been witnessing the loss of their ethnic members in the area are afraid of being shot or kidnapped by the fanatic fundamentalists. Many students are afraid of coming out of home, thus they miss their lessons.

For all these, to condemn the attacks and stop cruelty and massacre, last year, World Wide Protests were called by Hazara People International Network and Hazara Democratic Party of Pakistan and thousands of people participated in different European, American and Australian cities to make the voice of defenseless Hazaras heard but the attacks were not only continued but also increased in quantity.

This year, again with the increase of the attacks and bloodshed, the Hazaras protested in Quetta and in the capital Islamabad, but unfortunately as the extremist parties have a major role and influences in the structure of the current federal government of Pakistan therefore the voices of the defenseless Hazaras a reformist and progressive society is never heard there.

With this fact the only hope remains is the interference of the United Nations Security Council with the issue, the same as its other international mandates, to end this carnage by enforcing heavy sanctions against Pakistani Government to stop the Hazaras’ massacre in Quetta.

For this purpose, the Hazara activists continue their protests worldwide, using social networks and other communicating means until they convince the UN Security Council to help them stop the bloodshed of their people in Quetta Pakistan.

Hazara teenagers wasting their youth in detention in Indonesia
Previous

Hazaras And Their Political Position In Pakistan
Next