You are at:Home»Refugees»Asylum boat lost off Indonesia, 64 feared drowned 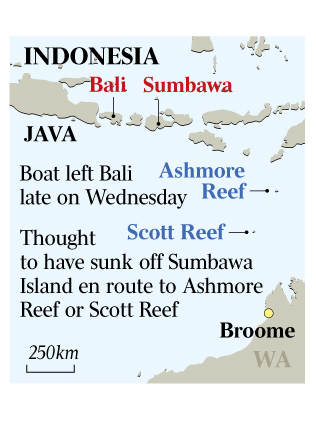 By Admin on April 13, 2012 0 Comments
Source: The Australian
Share this story

INDONESIAN water police were last night searching waters off Sumbawa Island for about 60 asylum-seekers, including seven children, whose Australia-bound boat is believed to have capsized in rough seas.

Last night, more than seven hours after water police headquarters in Jakarta was notified of the incident, rescuers had not located the boat or passengers.

The police search by five vessels and a helicopter was suspended overnight and there was no word of survivors.

The Australian understands the boat left Bali late on Wednesday night with 64 passengers, ethnic Hazaras from Afghanistan and Pakistan, and crew. The wooden vessel is believed to have capsized about noon off the southwest coast of Sumbawa, but remained afloat. At 7.30pm central Indonesian time (10.30pm AEST), a relative of an Afghan aboard the boat said he received a mobile phone message that the vessel was sinking.
The chief of Indonesian water police operations, Lieutenant Colonel Gunardi, said his officers had been able to speak to several asylum-seekers by mobile phones but had not found them by nightfall. A Sumbawa policeman said waves in the area were 2m to 3m high.

Three patrol police boats and two tugs and a helicopter from mining company Newmont Nusa Tenggara had been searching during the afternoon.

The fishing boat was heading for Australian waters in the area of Ashmore Reef.

A spokesman for the Australian Maritime Safety Authority said its Rescue Co-ordination Centre had received a phone call from a refugee advocacy centre in Brisbane to advise that a vessel was sinking off Indonesia. AMSA assessed the information as credible and passed it to Indonesian authorities.

The past week has seen a resurgence of smuggling on the main routes from Java to Christmas Island, with two boats carrying 255 people intercepted near the island on Tuesday night.