You are at:Home»Human Rights»Hazara women protest against targeted killing of community members 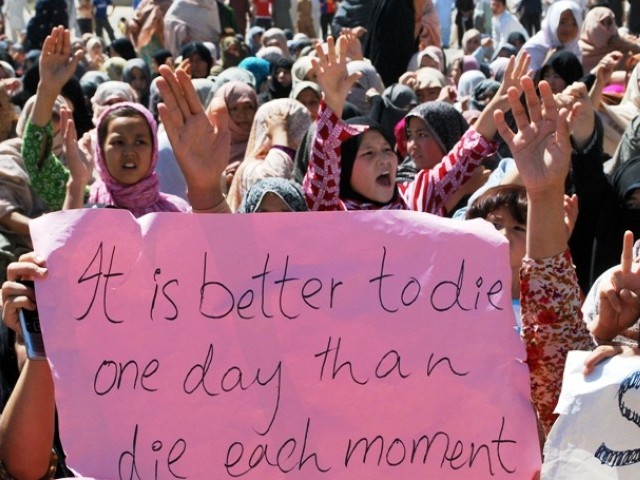 QUETTA: Women belonging to Hazara community staged a protest outside the Balochistan Assembly against government and law enforcement agencies’ inaction towards incidents of targeted killings in Quetta.
The protest demonstration was organised by Hazara Democratic Party (HDP) particularly against the target killing incident on Spinney Road on March 29, 2012, which left five people dead, including a woman belonging to the Hazara Community.
“We are compelled to come out from our houses due to all the injustices done to our people. Hazaras have been subjected to targeted killings and other acts of terrorism for the past decade,” said Nazneen Zaman, President HDP women wing. “Peace would prevail if government and its functionaries perform their constitutional duties with responsibility,” she said.
The protesting women said that the Hazara people cannot travel due to prevailing insecurity and increasing number of attacks against them.
They called upon Chief Justice Iftikhar Muhammad Chaudhry to take suo motu notice of the deteriorating law and order situation in the province, particularly targeted killings of Hazara people on sectarian basis.
“We have pinned all our hope on Chief Justice of Pakistan that he will provide us with justice,” a protestor told The Express Tribune.