You are at:Home»Human Rights»Deal between Pashtun Taliban killed a nine Hazara girl 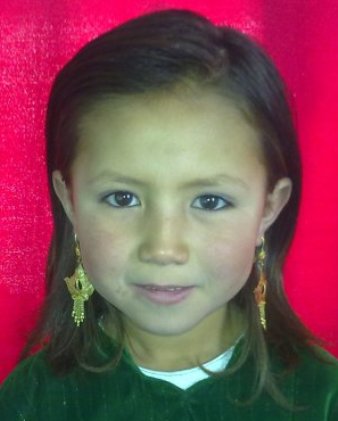 Tragedy of a secret deal

As Afghan authorities probe possible avenues for brokering peace with insurgent forces, the death of a child in a Taliban rocket attack that was sanctioned by the governor of Ghazni Province raises a crucial question: When does harsh pragmatism become a crime?

Nine-year-old Khatera Rezai was performing evening prayers before supper when the Taliban rocket plunged through the side wall of her home. It was the little girl’s last prayer: pieces of the projectile hit her directly, failing to explode but causing the living room to catch fire. The charge finally detonated as the family members were carrying her out. Khatera died of her injuries in hospital eight hours later.

Her mother and two of her three little brothers were also seriously injured in the incident, which beyond the immediate tragedy for this ordinary family in Ghazni, located 150 kilometres southwest of Kabul, has deeper implications for the overall peace process in Afghanistan.

Because this particular attack was personally authorized by the governor of Ghazni Province, Musa Khan Akbarzada.

“The Ghazni Taliban are under pressure from their superiors for not firing rockets at Ghazni City and for showing readiness to reconcile with the government,” Akbarzada revealed in a shocking announcement two months later at a meeting with tribal elders, journalists and visiting members of the national High Peace Council.

“We therefore permitted them to fire just two rockets at the city. In recent years rockets were constantly fired at Ghazni by the anti-government forces, but [in the past six months]only two rockets were fired at the city with my permission.” (see video link at foot of story) 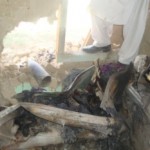 Remnants of the rocket that tore into the Rezai family's home, fired in a government concession to local Taliban. (Photos: Alizada)

Oblivious to secret deals to keep the apparent peace, it was an ordinary summer evening for the residents of Ghazni’s Towheed Aabaad district on July 1. Shortly after the call to prayer, two Russian-made rockets flew in with supersonic speed and impacted. One exploded harmlessly in an open space, the other punched through the side of the Rezai family home, its remnants hitting Khatera’s legs as she prayed, and then causing the fire.

This wasn’t the first rocket attack in the city this year. Akbarzada’s guest house came under rocket fire in March, but there were no casualties. And since the Towheed Aabaad district has a police station and is located close to US-Polish military base, it is in the sights of the insurgent forces.

But the rockets they use are hand positioned for launch and are hard to target accurately. In April a stray rocket hit Khatera’s school and killed a teacher. This time the victim was a pupil.

“I was on the roof of my house when a rocket fired from Espandi hit the house of the Rezai family,” said the head of the district council, Sayeed Nasrat, who witnessed the explosions and the aftermath. “I went there immediately and saw the whole family soaked in blood and crying.”

“It was eight o’clock in the evening when the rocket hit my brother’s house. The 140-centimetre long and 35-centimetre wide rocket blew up twenty minutes later while everybody was leaving the house to take the injured to hospital,” said Khatera’s uncle, Juma Khan Rezai, who is helping the family while his brother is working overseas. “Khatera was nine years old, a second-grade student who was at the top of her class. She died from serious burns.”

The revelation later that the attack was permitted by the governor unleashed a storm of criticism, starting with 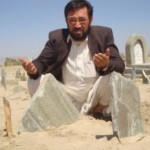 His demand was echoed by Hamida Gulestani, the head of the security division of the Ghazni Provincial Council, who said that the governor had “explicitly violated the laws of Afghanistan.”

“The Governor of Ghazni must pay for the blood of these people because he caused the death [and injury]of these people,” said Ms Gulestani.
“I strongly condemn this and he should be prosecuted,” agreed Nafisa Azimi, a member of the national parliament for the province. “The governor should be asked whether he is the representative of the people of Ghazni or the Taliban, and he should be held to account for this family’s loss.”

Political analyst Wahid Muzhda said the act of allowing enemy action was not only illegal but an indication that the government of Ghazni “has completely collapsed.”

“This is not peace but a compromise,” Muzhda said, adding that it was common practice in a number of provinces for governors to use operational funds to bribe the Taliban not to attack while they are in office.

The governor and his allies stand firm

The rocket controversy came six weeks before the September assassination in Kabul of Burhannudin Rabbani, the head of the Afghan High Peace Council. The Taliban leadership later retracted an initial claim to have carried out the suicide bombing that killed President Hamid Karzai’s chief peace envoy in contacts with insurgent forces. But his death cast considerable doubts on the prospects for negotiating an end to the fighting.
In Ghazni, the provincial office of the High Peace Council has frequently been criticized for its lack of accomplishments. When asked about the rocketing, members of the body quickly pointed to recent claimed successes.

“In the past, rockets were fired every day in Ghazni, but [over the past six months of]this year, the Taliban were talked to in this regard and only two rockets were fired,” said Ghani Bahaduri, the head of the secretariat of the council’s local office.

Concerning the decision to allow the two-rocket attack, Bahaduri said he had not been consulted and thought this may have been a “a slip of the tongue” on Akbarzada’s part.

As tragic as the incident was, one should not forget the bigger picture of efforts to bring peace, Bahaduri said: “The local office of the High Peace Council is very active and has made many achievements, including negotiation with 200 opposition forces to stop fighting the government and join the peace process.” 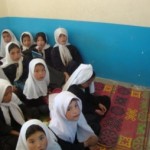 There has been an empty space in Khatera's classroom since July 1. (Photo: Alizada)

The same message was underscored by the governor himself in a tense interview with Afghanistan Today. His decision to allow rockets to be fired had to be seen in the context of wider efforts to bring peace to the province, he stressed.
He also expressed optimism that the efforts of the High Peace Council would soon bear fruit.

“Negotiations with the [local]Taliban have been going well and 200 opposition fighters under two Taliban commanders will join the peace process in the very near future,” said Akbarzada, who has been criticized for his lack of results in brokering any reconcilliation with local insurgent groups or individual fighters.

“These individuals had promised not to fire rockets in the province but came under pressure by their commander who is financed from the [Pakistani] side of the border of Afghanistan. In order to mitigate the amount of pressure upon them, I permitted them to fire two rockets at Ghazni.”

Emphasis had been placed on the rockets being fired at non-residential areas to avoid innocent bloodshed, Akbarzada said, adding that he would see that Khatera’s family receives compensation for their losses and the damage to their home.

But however it is explained and compensated, the incident reflects badly on the governor, say his critics.

“The governor of Ghazni Province does not consult with the provincial council on any issue and he did not inform us of his allowing the Taliban to fire rockets,” said Abdul Wali Khan Zada, the secretary of the Provincial Council. “The government should bring peace to people, and peace through firing rockets is not possible.”

Taliban dismisses reconciliation claim
Meanwhile, a spokesman for the Taliban leadership denied that there would be any reconciliation by insurgent forces active in Ghazni.

“The governor of Ghazni has not talked to any member of the Taliban,” Zabiullah Mujahid said in a telephone interview. “The Taliban are never willing to side with government, and those who are willing to join the government are not real Taliban.”

Regarding the July rocket strike, the spokesman said Taliban units were under instructions not to target residential areas but that rockets fired at police stations and other legitimate targets could cause collateral damage.

Local Taliban commanders contacted declined to speak about the issue.

Picking up the pieces

Khatera’s father is still on another continent and has been unable to come back to face the tragic injustice that has torn apart his family. His daughter is dead, his wife and two of his sons are still being treated for their injuries in a Kabul hospital. His brother is trying to keep the family together, but it is a struggle. 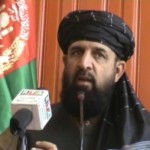 “We have been wandering lost for the last three months, and we urge the governor of Ghazni to pay for the blood of Khatera, the damage to our house, and every other loss inflicted upon us,” said Juma Khan Rezai. “If I get to meet him, I will ask him why he destroyed our house, why did he did not order the Taliban to fire rockets at his own home?”

Nonetheless, the family has tried to resume something resembling a normal life, scraping together enough money to repair the house damage. But they feel the pain of the absent injured family members and of the little girl’s loss every day.

“I loved my granddaughter so much, she loved to study and wanted to become a doctor in the future,” said Khatera’s sixty-year-old grandmother Setarah.

The death is also acutely felt at her school, where teachers had high hopes of her.

“Khatera was very smart and never missed classes,” remembered Hawa Gul, who taught her for two years. “She liked mathematics, Dari literature and history, and wanted to become a good doctor and serve her people.”

There is not much space in the classroom where Khatera used to study, seated on the floor like the other girls. But her friends cherish her memory,and still keep her place vacant.

(Text in translation): “In the past six months we did not witness any rocket attacks against the city. Frankly speaking, yes there were two rockets, people might be surprised by what I am saying, but yes I permitted [the Taliban]to fire two rockets at the city. Those people whose minds we have won over and those people who had contacts with us did not want to fire rockets at this Muslim city but they were under pressure from their command centre. They contacted me and I told them that they should exercise all caution and that it is OK to fire a couple of rockets at the city.”