No Shelter, No Protection: Afghanistani Asylum Seekers Struggle to Survive in Greece

Within the sprawling city of Athens, Greece, Victoria Park resembles a war front camp. Close to a thousand Afghanistani asylum seekers, many are children, now call this park... Within the sprawling city of Athens, Greece, Victoria Park resembles a war front camp. Close to a thousand Afghanistani asylum seekers, many are children, now call this park home. Hoping to put the struggles of a war torn homeland behind them, they left Afghanistan to find security. Sadly, the hunger, homelessness, cruelty and desperation has followed them on their path. 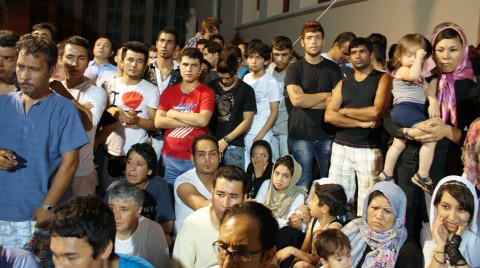 Zulmay, an Afghanistani refugee has been attacked several times by men he suspects are from a Greek nationalist group.
‘This park is the only sanctuary for us. If we go outside of this park, we are assaulted.” His eye is swollen, oozing and bruised. An injury confirming his claim of mistreatment by Greek assailants.
“If we go outside of the park, the Greek police will not protect us. The Greek police are reluctant to interfere when we are attacked. I went to the police when my head was bleeding after an assault. The police told me I should defend myself if I am attacked. Clearly, the Greek police will not register our complaints of harassment or assault.”

Zulmay says it is not good to fight back. It will only worsen the situation for a refugee and it could land them in jail or prison. He is not going to take the chance of being separated from his wife and children just to fight back.

“My family needs me. I must find us shelter and food. I want to find a job to take care of my family.” 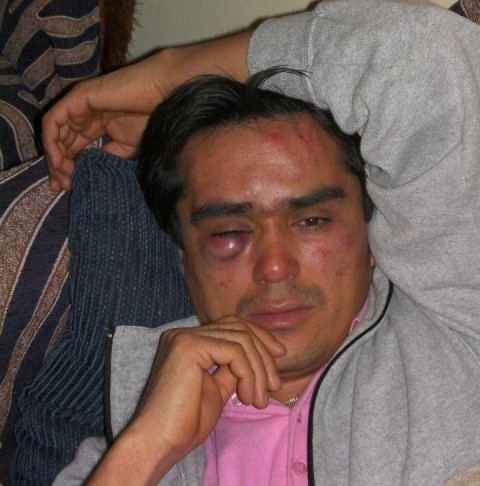 Along the roads of Athens, young Afghanistani refugee children work selling handmade items. For six months now, brothers Fareed, 8, and Hamyoon, 11, walk the streets selling to survive. Everyone in the family must do their part to earn money. Their parents ask them to earn at least 15 Euros before returning home to the park. It is a rough life compared to the children eating cereal and milk for breakfast in front of a television. A school bus will not arrive to taxi these refugee children to school for education. For now, the streets of Athens are their classroom. The lesson for “survival of the fittest” is now in session.

These Afghanistani refugees are waiting to be processed by the UNHCR (United Nations High Commissioner for Refugees), a UN agency mandated to protect and support refugees. The commission assists in the voluntary repatriation, local integration and resettlement. It is an immense and complicated process.

Consumed with their own economic troubles, it appears there are Greeks without care for the plight of refugees. You would think that a people so steeped with a history of war would understand such things. The days of Spartacus are long gone. Why must a refugee fight for his life and the life of his children within this arena? Would it have been better they starve or die on the battlefields of Afghanistan?

The cruelty and confinement in Athens has many refugees feeling an urgency to smuggle their families out of Greece and into neighboring European countries.

“We are not a danger to Greece. We only want to find safe shelter and a little food to feed our children. We desire a secure place to live and find work. Our people are capable and willing to work. We want our children to have a chance for education. Shouldn‘t everyone be allowed a safe place to raise a family? In my homeland, every day I felt fearful a bomb or bullets would destroy my family. Many of us have already suffered loss from the death of a loved one. A war that I did not start took away jobs and food for my family. No one should have to endure such things.” These words from an Afghanistani refugee mother sound like those of any parent concerned for their child.

Forced to flee from the Afghan war zone, the refugees patiently wait. Despite hunger, lack of shelter, and unkindness, many of these refugees still have hope. 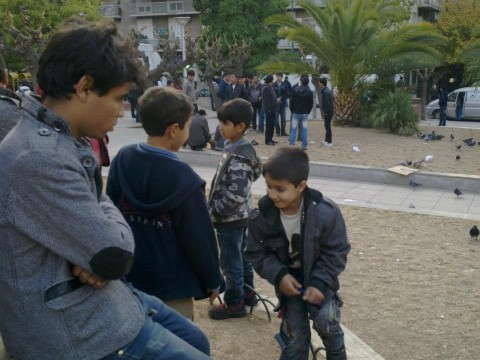 Dr. Younus Mohammadi, a spokesman for the Afghanistani community in Athens says, “If the Afghanistani asylum seekers do not get help, we will definitely face a human catastrophe here.” It is strongly felt the Afghanistani refugees need the UN police or police protection from some partial European group. The Greek government is unable to handle this deluge of refugees.

Dr. Mohammadi works as a medical physician. He states that according to Greece Interior Affairs, during the past six months, 60 Afghanistani refugees entered Greece every day! There were already hundreds of undocumented refugees in the country who did not have the financial means to settle anywhere, period.

Based on statistics by GCR (Greece Immigration Administration), 30,000 Afghanistani refugees have entered Greece since last year. The Greek government has only granted official refugee status to 52 of them.
The current economic crisis in this country has already disabled the Greek government. Adding the thousand fold refugees issues only compounds their budgetary problems. There clearly is an immediate need for international help with this crisis.

Most Afghanistani asylum seekers do not register their names at the police department because they do not want to settle in Greece. With no registration, they are unable to be covered by healthcare services.
“Refugee children are confronting an extreme situation here. They do not have access to medical care and they are malnourished as well. Many children confined to Victoria Park suffered severe sunburn and dehydration during summer. Soon, winter will be upon us. Only 58 families have registered and received a health card. Out of a thousand.”

Dr. Mohammadi urges the refugees to get documented, but he understands their frustrations.

You must be asking yourself the same questions as I did. Exactly how do you explain to homeless, hungry people the need to fill out registration paperwork for police who can’t help when you need them? Where there is hunger, there is stealing. Where there is desperation, there is frustration, anger and potentially violence. Why bog down a country’s overwhelmed and understaffed police department by asking them to register refugees when it is the United Nations mandate to place such displaced persons? 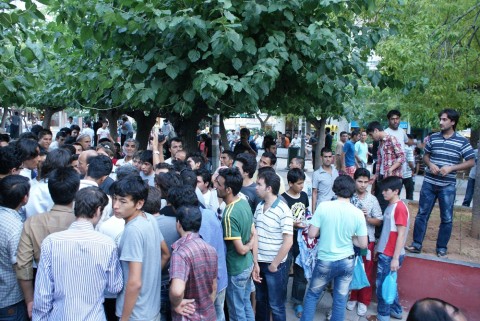 So far, twelve refugee children between ages 9 and 13 were found wandering the dark streets of the city alone. They were malnourished and emotionally impaired. These children are now protected by an association in Athens called “Child Smile”. It is critical these refugee children are protected and nurtured for the sake of their future. If their parents can not do it, someone must step up and see to it the children are cared for.

Reviewing a year of struggle
Next