You are at:Home»Refugees»Australia»FROM THE BOATS TEARS COME FROM THE BOATS TEARS COME

Three days after the asylum seeker boat incident off the coast off Indonesia fifteen people have been spotted on a remote island beach bringing the tally of total survivors to a meagre forty seven only. Young Esmat Adine, a young Hazara man, is one of fifteen Hazaras he knows of who survived the tragedy off the coast of Java, Indonesia, in the wee hours of Saturday morning when a boat fit for only one hundred was packed liked sardines with two hundred and fifty asylum seekers, eighty per cent whom were Hazara from Afghanistan and Pakistan. Esmat, rescued by local fishermen who braved the Monsoon swell to save lives is now in a hotel room onshore and says that many of the dead included teenage boys from Quetta, or UAMS as they are known by the Department of Immigration here in Australia – unaccompanied minors. The people smugglers who took up to the equivalent of $5000 AUS are named as Sayed Abbas, Mohammad Ali Chotta and Ismail Haji , all Hazara themselves. According to Australian media back in August 2011, Sayed Abbas was to be arrested by Australian Federal Police and extradited to Australia for trial. The Jakarta Globe reported on August 27 that he had indeed been arrested by Indonesian police with Inspector General Sutarman stating “Abbas is now being interrogated by the National Police’s anti-people-smuggling task force while awaiting his upcoming extradition to Australia.”

However that event did not happen, either in a diplomatic cock up between Indonesia and Australia or suspected corruption within Indonesian circles which has seen former members of the Indonesian military involved in such operations at a higher level. Abbas has lived in Jakarta for ten years in the Kebon Sirih district of Jakarta, home to asylum seekers and smugglers alike. It is no secret that Indonesian military control or operate detention centres across the islands from Kupang to Makassar. In Kupang alone there are hundreds of asylum seekers languishing in detention subject to violence, disease and starvation. Foreign media, including mainstream press in Canada are blaming Australian policies for the tragedy. Asylum seekers are currently pawns in a political chessboard played out by the two major parties. Despite figures released showing more than 60,000 visa overstayers from the UK, USA and Malaysia going unchecked, the “boatpeople” as they are called, still remain the Achille’s Heel in Australia’s immigration policies. Caught between a rock and a hard place, the Hazaras fleeing Afghanistan and Pakistan end up in limbo in Indonesia once they arrive, forced to either remain illegally or risk their lives to journey to their ultimate destination. Yet the irony is clear as day. Indonesia welcomes all who fly into its various cities and islands but then acts as a punitive Islamic state by incarcerating those caught in public places or on boats. Then when asylum seekers are intercepted and detained by Australian authorities they usually spend at least a year in detention. Each person makes $90,000AUS profit for their gaolers, the British company named SERCO. 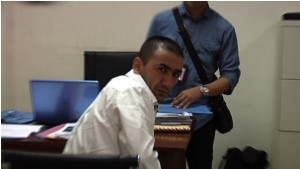