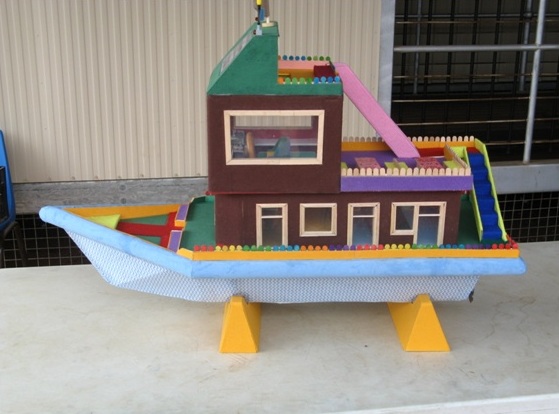 By Admin on December 9, 2011 4 Comments
My Dream Boat by Javad Javadi
Share this story

For the first time, a Hazara has won the annual Human Rights Art Award in Darwin in Australia’s Northern Territory, presented by Mrs Tessa Pauling, the wife of the Chief Administrator, representative of Queen Elizabeth here in Darwin. Chosen from a large pool of entries that included aboriginal artists and contemporary painters and sculptors as well as other artists in detention, the exhibit My Dream Boat by Javad Javadi was the show stopper of the two works he submitted with the judges unanimously declaring him the outright winner.
Javad Javadi is a plasterer from Bamiyan Province in Afghanistan although he hasn’t been home for more than thirty years, having fled as a child to Iran like many Hazaras from the region who feared the murderous Pashtun warlords who roamed the region and eventually took power under the Taliban government, destroying the famous Bamiyan Buddhas in 2001. In 2009 he and his family found themselves in Quetta, Pakistan, after the Iranian government evicted Hazaras there in exile and it was then that he fled to journey to Australia via Indonesia . There he boarded a fishing boat, was intercepted in Australian waters and then began what is now almost two years in detention , currently in Darwin. During that time he has become a prolific and accomplished artist and model maker of astonishing skill. His attention to detail and ornamentation is legendary and his work can be enjoyed by all age groups as they exude a timeless beauty and sense of adventure and wonder. Using felt, icy pole sticks, dishcloths, discarded plastic containers, magazines and glue this boat is a cross between an Indonesian fishing boat and an Australian ferry,updated with GPS satellite,radar unit, beds, rest rooms and eating areas. Territory and ACT flags adorn the top alongside aboriginal flag colours. A quote is placed on the helm:

“Nests can’t be made in the cages. I wish I were free. I would do a lot more than this creativity”

His other exhibit, My dream house is a combination of a traditional home in Afghanistan and an Australian home complete with swimming pool, car,garage, towels on the clothes line, neat grass and people inside. Made from balsa wood, dishcloths, felt, icy pole and matchsticks and plastic, all recycled here to astonishing effect. Trees made from earbuds. Rooftop picnic tables with Afghan carpets . Like the Dream Boat many hours of precise positioning of small objects and a complex level of juxtaposition certainly won over the hearts of many small children at the event who could relate to the narrative at work in the model. Home ownership may be still part of the Australian dream for some, and that certainly includes Hazara asylum seekers who risk their lives in boats to come here in the hope of one day bringing their wives and children to settle in a safe country where the opportunity of literacy and a life without violence is golden. One can only imagine a real life scale model of a house for Mr Javadi and his family in the future as an Australian resident with incredible skills to offer our society. My Dream Boat by Javad Javadi 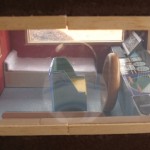 Interior of Captain’s cabin with GPS laptop and radar navigation 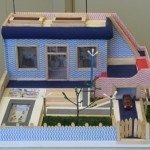 My Dream House by Javad Javadi