You are at:Home»Refugees»Pakistan and the rest of Asia Pacific»Pakistan: Protect Hazaras 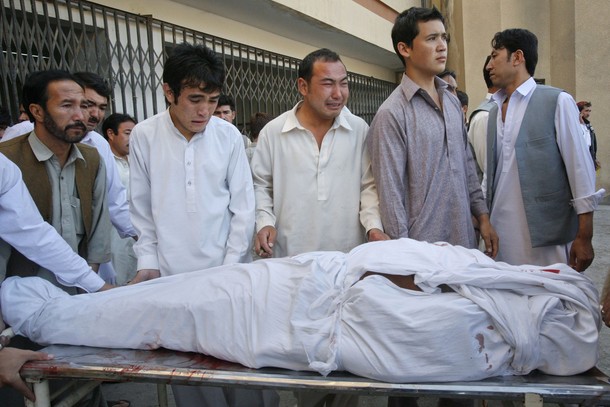 Hazara International Network: Target killing of the Hazaras in Pakistan is a clear example of genocide.
Second article of Convention on the Prevention and Punishment of the Crime of Genocide says:

In the present Convention, genocide means any of the following acts committed with intent to destroy, in whole or in part, a national, ethnical, racial or religious group, as such:
(a) Killing members of the group;
(b) Causing serious bodily or mental harm to members of the group;
(c) Deliberately inflicting on the group conditions of life calculated to bring about its physical destruction in whole or in part;
(d) Imposing measures intended to prevent births within the group;
(e) Forcibly transferring children of the group to another group.

Rights groups such as HRW should look at the whole picture of Hazara situation both in Pakistan and Afghanistan. The main reason of mass-killing of Hazaras in Pakistan is not bing Shia. The meain reason is bing Hazara.
———————————
Pakistan: Protect Shia Muslims

Hold Accountable Extremist Groups Responsible for Killings
Human Rights Watch
(New York) – The Pakistani government should urgently act to protect Shia Muslims in Pakistan from sectarian attack during the Muslim holy month of Moharram, Human Rights Watch said today. In recent years, Sunni extremist groups in Pakistan have been implicated in a number of deadly attacks on Shia during Moharram, which in 2011 began on November 26.

“Shia in Pakistan should be able to participate in Ashura processions without fear of attack,” said Brad Adams, Asia director at Human Rights Watch. “Pakistani authorities need to address the severe danger faced by the Shia population with all necessary security measures. They can start by arresting extremist group members responsible for past attacks.”

Human Rights Watch has recorded at least 18 sectarian attacks on Shia in 2011. Since Pakistan’s return to constitutional rule in 2008, hundreds of Shia have been killed across Pakistan by alleged Sunni extremists. Human Rights Watch research indicates that at least 275 Shias, mostly of Hazara ethnicity, have been killed in sectarian attacks in the southwestern province of Balochistan alone since 2008.

On November 29, Mohammad Danish Alam, a Shia teacher at Balochistan University, became the latest victim of an apparent sectarian killing when he was gunned down by unidentified men in the Zarghoonabad suburb of Quetta, Balochistan’s capital. Local police reported that Alam, a science and information technology lecturer, was on his way to the university on his motorcycle when gunmen opened fire and killed him.

On October 4, gunmen on motorbikes stopped a bus carrying mostly Hazara Shia who were headed to work at a vegetable market on the outskirts of Quetta. The attackers forced the passengers off the bus, made them stand in a row, and then opened fire, killing 13 and wounding 6 others.

On September 19, near the town of Mastung in Balochistan, gunmen forced about 40 Hazara who had been traveling to Iran to visit Shia holy sites to disembark from their bus. They shot 26 dead and wounded 6. Although some of the Hazara escaped, gunmen killed another three as they tried to bring the wounded to a hospital in Quetta. Lashkar-e-Jhangvi, a Sunni militant group, claimed responsibility for this attack.

Pakistani and international human rights organizations, including Human Rights Watch, have made numerous calls to Pakistan’s authorities to hold those responsible for the attacks to account. While authorities claim to have arrested dozens of suspects, no one has been charged in these attacks.

“The ongoing targeted killings of Shia send a chilling message to all Pakistanis that their government won’t necessarily act to protect them,” Adams said. “The government’s failure to break up the extremist groups that carry out these attacks calls into question its commitment to protect all of its citizens.”

Some Sunni extremist groups are known to have links to the Pakistani military and its intelligence agencies. Groups such as the banned Lashkar-e Jhangvi operate with impunity even in areas where state authority is well established, such as Punjab province and the port city of Karachi. In Balochistan, where local militants challenge government authority, and elsewhere across Pakistan, law enforcement officials have failed to intervene or prevent attacks on Shia and other vulnerable groups.

Human Rights Watch called on Pakistan’s federal government and the respective provincial governments to apprehend quickly and appropriately prosecute those responsible for Alam’s killing, the September 19 and October 4 attacks, and other crimes targeting the Shia population.

“Pakistan’s civilian and military leaders should recognize that their tolerance for extremist groups is killing their own citizens,” Adams said. ”They need to stop appeasing extremists and start holding them accountable.”
Copyright and source