You are at:Home»Refugees»Europe»Familiar voice in strange land 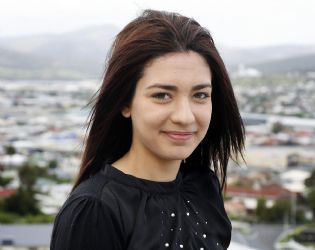 SUPPORT: Maryam Gholami, 17, of Moonah, is helping teach English and working as a translator with refugees at the Pontville Detention Centre. Picture: LUKE BOWDEN
Europe

By Admin on November 3, 2011 5 Comments
SUPPORT: Maryam Gholami, 17, of Moonah, is helping teach English and working as a translator with refugees at the Pontville Detention Centre. Picture: LUKE BOWDEN
Share this story SUPPORT: Maryam Gholami, 17, of Moonah, is helping teach English and working as a translator with refugees at the Pontville Detention Centre. Picture: LUKE BOWDEN

Now the Moonah 17-year-old, who could not speak English when she arrived in Australia, wants to help asylum seekers at the Pontville detention centre.

Maryam, her mother, two brothers and a sister fled Iran eight years ago after years of being treated badly.

“Because of Mum’s Afghanistan roots we were always treated like we were not equal and [treated]unfairly in Iran,” Maryam said.

“They would do anything to get us out of there and we were there as refugees from troubles in Afghanistan.”

She said as her parents’ life in Afghanistan plunged further into chaos, the family fled to Iran, where Maryam was born, before they came to Australia as refugees.

The Farsi-speaking St Mary’s College student will visit the Pontville centre as a translator.

“I want to support and encourage them because I myself know how difficult it was to have no English and not know the culture,” Maryam said.

“It is frightening and you feel alone.”

Tasmanian Asylum Seeker Support Network founder Emily Conolan said many of the detainees had origins in Afghanistan, only speaking Farsi or Dari, and Maryam’s skill would be of comfort to many who could not communicate with anyone.

Ms Conolan said the number of volunteers was overwhelming.

The detention centre is run by Serco.

Ms Conolan said the aim was to develop healthy connections for the detainees through workshops which are to start at Pontville soon.

“This will encourage more of them to settle here after they are granted visas,” Ms Conolan said .