You are at:Home»Human Rights»Genocide»Attack on Hazara community in Quetta: 13 dead 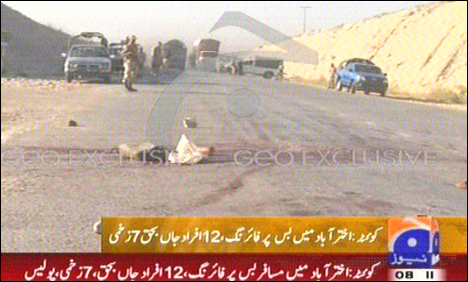 QUETTA: At least 13 people of Hazara community were killed and seven seriously injured after unknown gunslingers Reportedly around 20-30 people on board a passenger bus came under fire on their way to Hazar Ganji from Quetta. It’s hard to establish the number of dead/ injured owing to scanty details, but casualties are feared to rise as some of the wounded are in critical condition.

Eyewitnesses say the gunmen stopped the bus, dragged some passengers down and shot them dead following which they opened indiscriminate fire on the bus making more kills.

Police have cordoned off the area and the dead/injured are now being rushed to Combined Military Hospital (CMH) as Bolan Medical Complex to which they were shifted earlier lacked emergency treatment facilities, said last reports.

The attackers made their escape before the police could arrive at the scene. Later, some enraged people set the ill-fated bus on fire.
Source