You are at:Home»Refugees»Australia»Curtin Asylum Seekers hold protest at Hazara killings in Quetta – Neither Pakistan nor Afghanistan is safe for Hazaras 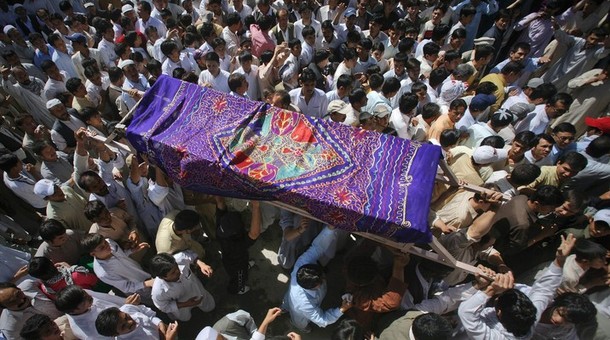 CURTIN ASYLUM SEEKERS HOLD PROTEST AT HAZARA KILLINGS IN QUETTA.
NEITHER PAKISTAN NOR AFGHNAISTAN IS SAFE FOR HAZARAS

Yesterday (Thursday 21 September), at 3.30pm, more than 400 mostly Hazara asylum seekers staged a peaceful protest near the administration building inside Curtin detention centre.
According to a statement released by the Curtin Hazara asylum seekers, the hour-long demonstration was to let the immigration department know of the dangerous situation that face their families in Quetta, Pakistan.

Quetta has a large community of Hazaras who have fled persecution in Afghanistan. But Pakistan is mostly Sunni Muslim and the Hazaras, who are Shia Muslim, are increasingly the target of fundamentalist
killings in Quetta. Many of the Hazara asylum seekers families have been left living illegally in Quetta.

“We want immigration department to know how we feel and how much we worry [about our families’ situation].” the statement said.

The protest was held following news that on 20 September, over 29 Hazaras traveling on a bus near Quetta, were separated from other passengers and executed. It was the third such attack in a month.

A number of speeches at the Curtin protest told of the persecution of Hazara and Shia Mislims. The asylum seekers held banners saying, “Where is UN?”; Why UN do not hear our voice?; Stop killing of innocent Hazaras?; Is being Hazara is a crime?
At the end of the peaceful protest the asylum seekers returned to their compounds. But the anxiety remains.

On the same day as the mass killing of Hazaras in Quetta, the Australian government deported an Hazara man from Villawood detention centre to Pakistan.

“The man is not a citizen of Pakistan. And the immigration department ignored the very real dangers that confront the Hazaras in Quetta. The deported man’s son had been injured in a Taliban attack in May this
year,” said Ian Rintoul, spokesperson for the Refugee Action Coalition.

“The Australian government has directly violated its commitments not to refoule asylum seekers. We are also calling on the government to terminate its Memorandum of Agreement with the Afghan government to
return Hazaras to Afghanistan?

“How can the Australian government possibly justify such an agreement, when the attacks on the Nato base and the killing of Burhanuddin Rabbani, the head of the Afghan Peace Council show that Kabul itself
is not safe?” asked Rintoul.