By Admin on September 25, 2011 0 Comments
GETTY IMAGES
Share this story 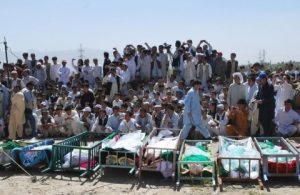 Pakistani Shiite Muslims mourners attend a funeral ceremony of their community members in Quetta on September 21, 2011, after their killing by gunmen. The Pakistani government came under heavy criticism from Shiite Muslims and a leading rights watchdog after 29 people died in the worst attacks on the Shiite minority for a year. In a brutal assault, gunmen ordered Shiite pilgrims out of their bus, lined them up and assassinated 26 in a hail of gunfire in Mastung, a district 50 kilometres (30 miles) south of Quetta, the capital of Baluchistan province. AFP PHOTO / BANARAS KHAN (Photo credit should read BANARAS KHAN/AFP/Getty Images)