You are at:Home»Art»Musa Hazara brings his music and art from Afghanistan to Winnipeg 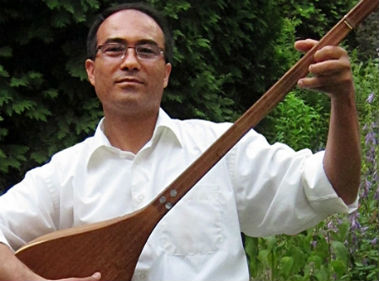 Musa Hazara brings his music and art from Afghanistan to Winnipeg

Winnipeg’s Musa Hazara makes music and art that is inspired by his homeland of Urazagan, Central Afghanistan. Musa learned to play Hazaragi songs at home as a young boy listening to his father playing and singing. He later studied with two masters in his area.

He sings traditional songs and composes his own music, in Dari and English. He plays a 2 – stringed insturment called the Dambora. The Dambora is a 2 string guitar or lute like instrument with a long neck. It’s a popular instrument that’s also found in neighbouring central Aisian countries.

Musa composes his own music and sings in Dari and English. Some of his songs contain both languages. He says, “I want Canadians to feel like this music belongs to them and it is my gift to Canada.”

He’s even written a song called Canada that expresses his love for his new country.
Have a listen to Canada.