You are at:Home»Refugees»The killers come and sanctuary is far away 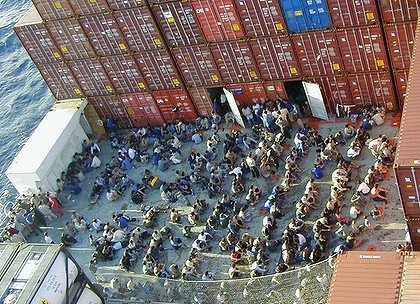 Rescued refugees aboard the Tampa in 2001.
Refugees

The killers come and sanctuary is far away Rescued refugees aboard the Tampa in 2001.

SARWAR had been home a week when they came for him. After more than two years away from Afghanistan – on leaky boats and in refugee camps seeking a new country to call home – he returned to his village in Ghazni province.
”He was at his home for one week, when some men, some Taliban came on motorbikes. They took him from his house and they killed him. They dragged him outside and choked him to death with barbed wire.
”His wife and children saw him killed. They fled. I don’t know where they are now.”

Mohammad Akbar Sohrabi carries a photo of Sarwar. It’s mixed up among the meagre mementoes he has from his time overseas, alongside a flimsy passport with an incorrect birthdate and a Nauru stamp in it.
Sarwar and Sohrabi were two of the 438 men, women and children rescued from the stricken and sinking Palapa 1 in August 2001 by the Norwegian freighter, MV Tampa.
Denied permission to seek asylum on Christmas Island, the group was taken to Nauru, the first conscripts of the Howard government’s Pacific Solution.

The shopkeeper and the metalworker were firm friends at Topside, the Australian-run refugee camp on Nauru. The picture shows them happy, making preparations for one of the occasional parties the detainees held. Then, they believed they would be resettled in Australia.
But eventually, pressured to return to Afghanistan, they flew home together – ”but we faced the same problems, the same people, waiting for us”.
It was Sohrabi who warned his friend not to go home, that his village wasn’t safe.
”But he went, and he died,” Sohrabi says. ”He was innocent, he was a very decent man. God willing, I am still alive.”
But he remains in hiding.