You are at:Home»Art»An amazing cultural event was held by the Dorredari Foundation, at the Adelaide College of arts 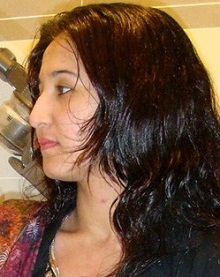 An amazing cultural event was held by the Dorredari Foundation, at the Adelaide College of arts 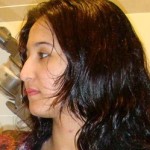 On 10nth of August, 2011, 7:30PM an amazing cultural event was held by the Dorredari Foundation, a group of Afghan writers, poets, singers and artists, in Adelaide college of arts.

The evening commenced with a warm greeting from Ms. Lynette Crocker, an aboriginal Australian, who welcomed everyone to Guana Land. She expressed her appreciation to the Dorredari Foundation for organising the arts program and also for the opportunity to discover more about its different culture and traditions.

Next, Ms. Liz Parker also welcomed everyone and invited Razia Ali as presenter to introduce the various guests to share their poems and stories.

At 7.45pm Razia Ali greeted the audience and expressed her delight and appreciation for their presence and interest. On behalf of the Dorredari Foundation she also thanked the Adelaide College of Arts and the Multicultural Writer’s Association Inc. who had sponsored the program and told the audience something about the aims and activities of the Dorredari Foundation and its support of Afghanistan poets, artists and writers. 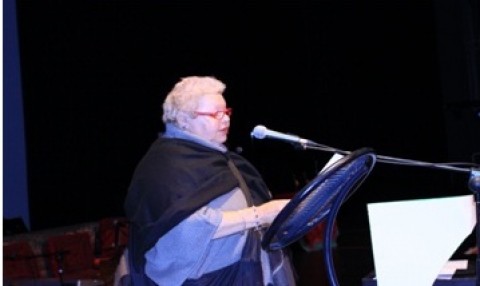 Three poets from the Foundation, Mr. Rohullah Danish, Aziza Zafari and Kazim Darwesh were then introduced and came up to read their poems in turn.
The audience was transported to the broken, sad and suffering world of Afghanistan by the moving word pictures created by the language of the poets. One could hear the cry expressed in the poems spoken in native Dari and also in English, evoking feelings of deep sadness for the plight of this country and its people. One listener could not restrain her tears when Aziza read her poem about the sufferings of her beloved and homeland.

The next item was presented by the Hazaregi vocalist and instrumentalist, Ali Alima, who stirred the hushed audience with his melodious singing accompanied by the Damboora. This unique instrument, something like a guitar in appearance, is played by the ethnic group of people in Afghanistan that are called Hazara. It has its own distinct sound and is played in a different way from the guitar. It can be very expressive in conveying various moods and emotions and complementing the singer with its sensitive accompaniment. Ali Alimi sang in both Hazaregi and English.

Then Ismail Alizada was asked to come to the stage and immediately engaged the audience with the beautiful and moving story he had prepared. 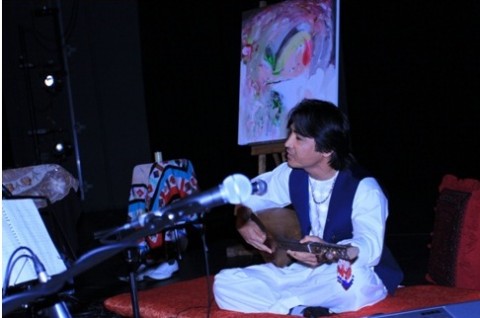 Next a fascinating documentary on recent archaeological treasures discovered in Afghanistan was shown and provided an interesting glimpse into the history of the country.

Following the documentary the poet, Elyas Alavi was introduced. Some of his works had been released in beginning of 2008 and had been published under the title “I am a Day-Dreamer Wolf”. Before reading his poem he shared his personal feelings of sorrow and loneliness and his longing to see his loved ones and friends again. Once again the audience was moved to tears. He then went on to read his poem “Where Is Our Homeland?”. 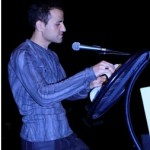 Zahra Hosseini , another poet, also shared her feelings openly as she offered the comforting thought that our “homeland is in the heart” and Afghanistan is wherever and whenever we meet together with our friends, sharing our pain and sorrow as well as our joys with each other.

A change of mood was ushered in with the musicians, Feroz Ansari the singer (Harmonium), Jay Dabgear (Tabla Nawaz –drummer) and Kith Preston (
mendolin). It was inspiring to witness 3 different people from 3 different countries playing and singing together with great enjoyment. Kate wore Afghan garment and Jay his own Indian costume. Feroz Ansari lifted the spirits of his listeners with his joyful and exciting songs. 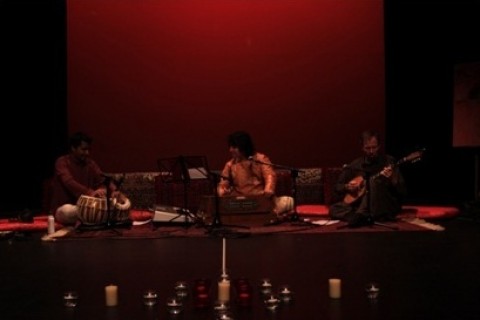 At the completion of the music Miss Razia Ali invited Miss Shukrya Erfani to make presentations of appreciation to Liz Parker, Sue Flemon and Paul Burger the technician who had worked so hard to make the event such a great success.

The evening closed with finger food and an opportunity for anyone to look at the paintings of artist, Elyas Alavi and caricatures of Bashir Bakhitiari on display.

A certain Australian guest at the event remarked on how good it was to have had this special opportunity for Australian and Afghan people to come together in such a friendly way and gain a deeper understanding and appreciation of one another through the experience of art, music and creative writing.