You are at:Home»News»A Hazara student made an aircraft and had successful flight over Shiberghan 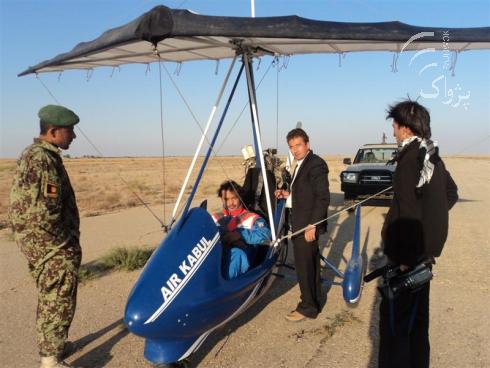 A Hazara student made an aircraft
News

By Admin on August 9, 2011 6 Comments
A Hazara student made an aircraft
Share this story A Hazara student made an aircraft

Afghan flies his aircraft over Shiberghan
by Hadi Ghafari on 6 August, 2011 – 16:09
BAMYAN CITY (PAN): An airplane, made by an Afghan citizen three years ago, has made five successful flights over Shiberghan, the capital of northern Jawzjan province, officials said on Saturday.
A 12th grade student, Sabir Shah Rezaee, made the aircraft three years ago. He has flown it five times over the past 20 days, said Maj. Niamatullah, commander of the Jawzjan airport.
He told Pajhwok Afghan News the plane was slightly damaged during an emergency landing, which was blamed low-quality airstrip.
“I have no prior experience in flying planes and need to be trained,” said Rezaee, who had been curious since his childhood to make the airplane. Given its small size, his aircraft can carry only two crewmembers.
The 24-year-old used a Japanese auto engine and other used vehicle parts to make the aircraft. Without support from any technician, the man just relied on reading books and surfing the Internet.
Capable of flying at an altitude of 300 metres, the plane can cover a 400-kilometre distance. The man spent 5,000 afs ($100) on making the aircraft. “I can fly to Kabul using my aircraft,” Rezaee said.
Hailing from central Ghazni province, the man received a $1500 reward from President Hamid Karzai and another $1200 from an Afghan businessman. But he assailed the Ministry of Transport and Aviation for refusing to encourage him.
Eng. Rasikh, deputy minister of transport and aviation, said he had communicated with Rezaee. The aircraft needed to be checked before it could fly, the deputy minister added.
mam/mud