You are at:Home»Refugees»Students protest on roof of Monash University in solidarity with asylum seekers 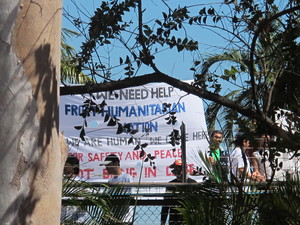 On July 27th fefugee rights student activists have taken to the roof of the Monash University campus centre (Clayton Campus) in protest against the Gillard Government’s treatment of asylum seekers. The rooftop protest was called specifically to support the refugees currently detained at the Darwin Detention Centre, who are demonstrating against their imprisonment.

Declan Murphy, of the Monash Refugee Action Collective (MRAC), the student activist organisation that called the rooftop protest, says that “we think that what the refugee protesters are doing in Darwin is completely justified in light of the repeated reports of brutality within the detention centres and the ongoing crime of mandatory detention in Australia. We called this protest not only to support those refugees resisting in Darwin but to show our solidarity with the three asylum seekers in Broadmeadows who have stitched their lips together and in response to the signing of the Malaysian ‘solution’ which we believe is another example this Government’s racist anti-refugee agenda.”

The Monash Refugee Action Collective’s demonstration is supported by refugees within the Darwin detention centre, one of whom has wrote that “I am thanking all the Student of Monash University that they are with us”.