You are at:Home»Refugees»Letter from a Hazara refugee: ‘We hope someone will hear our voices’ 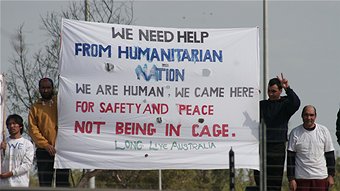 Letter from a Hazara refugee: ‘We hope someone will hear our voices’

By Admin on July 27, 2011 0 Comments
20 men are still protesting on the rooftop of the Darwin detention centre (Clare Rawlinson - ABC)
Share this story Humble submission for paying a best and warm wishes to you from Afghan Hazara asylum seekers, Darwin Detention Centre, NORTH-I.

As the protest has been started since Sunday morning at 1:30 on July 23, for this hope that someone will hear their voices and say something for their rights that they deserve, but alas!

Still there is no process, no one came and [reassured them about what]they are requesting about.

They are on the roof and having [nothing to]eat and drink since that time. They are from Afghanistan. They are requesting for justice and fair process.

They are waiting for someone who comes to convey their request to those that believes in humanity, in justice, in peace, in democracy, in equality.

They are on protest and their protest is peaceful and very humble.

We came here and believed that the Australian people [would]of course protect us. As we believe in you, please believe in us. We are waiting for you, for your kind assistance.

They are requesting justice and requesting [their]freedom. They are on a peaceful protest.

They are requesting from you people to come and support for get them out of the cage.

So please, please forward our voice to those who work for humanity and believe in humanity. They want “freedom”.

They have written on the banner many things, such as:

1. We need help from humanitarian nation, we are Human. We came here for peace and safety not being in the cage.

5. Awaiting for your help.

Warm and best wishes for you.