You are at:Home»Refugees»Australia»The Malaysia nightmare for asylum seekers 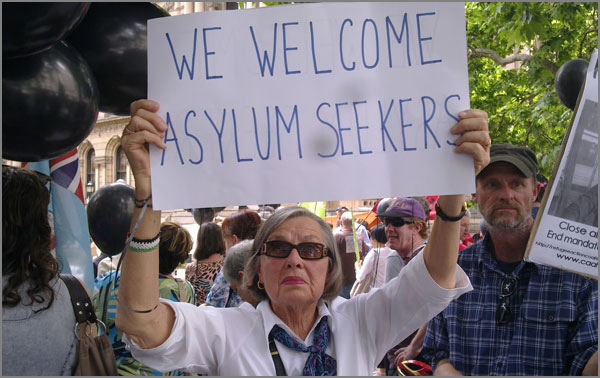 The Malaysia nightmare for asylum seekers

Under the Gillard government’s new deal with the Malaysian government, the next 800 asylum seekers who attempt to reach Australia by boat will be forcibly transported to Malaysia and detained there at the end of the “queue” of 95,000 refugees waiting to get to third countries. Getting to the front of the queue could take them as long as 20 years. That, in effect, is their punishment for trying to get here in leaky boats. In exchange, each year for the next four years Malaysia will send to Australia 1,000 asylum seekers whose refugee status has already been established. The United Nations Commission for Refugees (UNHCR) has approved the deal, but has expressed concern about the fate of the 800 new arrivals. Malaysia is not a signatory to the UN Convention on Refugees, and the Commission will not be a signatory to the deal.

Australia has contributed $292 million to cover UNHCR costs for the healthcare, education and resettlement of the 800 detainees. They will be provided with documents stating they’re not “illegal” migrants, but that’s no guarantee their rights will be respected.

The outlook for any of the 800 who experience this treatment would be grim indeed. They would have no legal right to work or access to government schools and healthcare, and conditions in existing Malaysian detention centres are appalling.

The Gillard government’s Malaysian deal assumes that getting approval from the UNHCR and the Malaysian government is the only hurdle to its implementation.

The Refugee Action Coalition (RAC) has taken action in the High court on behalf of a Hazara Afghan man currently being held on Christmas Island. The RAC is challenging the lawfulness of the government’s policy of sending asylum seekers from Christmas Island to detention in third countries.

The RAC claims that under the Malaysian deal “… families sent back to Malaysia will have the fathers separated from the mothers and children. And this from a government that says it is committed to getting children and families out of detention.”

Another court case involves a woman and her four-year-old child who are detained on Christmas Island, while her husband has had his refugee status accepted and is now living and working in Australia. The UN Refugee Convention, to which Australia is a signatory, states that refugee families must not be separated. A court finding that the family in question must be reunited under the Convention would create a precedent for exceptions to the off-shore detention policy.

An even more glaring false assumption is that the figure of 800 transportees will never be reached because the number of new arrivals in Australian waters will dwindle and finally cease as a result of asylum seeker fears about being sent to Malaysia, and that the government will finally be able to claim that it has “turned back the boats”.

This is nonsense. People who are desperate will still seek to gain refuge in Australia across the sea. If anything, the Malaysian arrangement is likely to result in asylum seekers taking even greater risks than at present, by trying to reach the mainland rather than Christmas Island or any of the other islands which have been excised from immigration law.

They’ll certainly be tempted to do so because if they’re successful they’ll be detained on the mainland and will be entitled to legal representation in appeals against negative government decisions on refugee status.

Last week riots erupted again on Christmas Island, as a number of inmates protested against their detention, which in some cases has lasted for seven months. Once again the protest was crushed by police using tear gas and bean bag bullets.

Predictably, Immigration Minister Chris Bowen responded with threats, refusing to take responsibility for delays in the processing of applications for asylum. “People undertaking this sort of activity are achieving nothing except potentially their release from detention and transfer into a prison”, he thundered.

Last Thursday 60 Hazara Afghan detainees began a hunger strike against their prolonged detention in the extremely isolated Scherger detention centre, near Weipa in Queensland. The number of hunger strikers has now grown to 100.

Ian Rintoul from the RAC has claimed that the long detention of these people has resulted from government policies of deliberate discrimination. He commented:

“They are victims of the 2010 visa freeze and of discriminatory off-shore processing that has seen the acceptance rates for Hazara asylum applications fall dramatically from around 98 percent to just 57 percent in the three months to March this year.

“When the visa freeze was announced in April 2010, the government said it expected that more Afghan asylum seekers would be rejected. And that’s exactly what happened. Those rejection rates are based on straight out government interference and so-called ‘independent reviewers’ doing the government’s bidding.

“Earlier this year in Curtin detention centre one reviewer had rejected 13 of 14 Hazara cases he had responsibility for. These figures can’t be explained except by bias. There is a solid case for an open review into the decision-making process that is rejecting so many Afghans, when … the conditions of Hazaras are deteriorating in Afghanistan and Pakistan.”

Meanwhile, the government continues to subject asylum seekers, who comprise less than one percent of all immigrants, to mandatory detention and off-shore processing. The Malaysian arrangement, signed last Monday, is the latest manifestation of these cruel, discriminatory policies.

Malaysia has refused entry to 560 Christmas Island detainees who arrived there after the Malaysian deal was announced but before it was signed, so they will be processed on the mainland. If, as the government says, this is appropriate for them, it is appropriate for all asylum seekers. It is time to stop off-shore processing altogether