You are at:Home»Refugees»Australia»Detainees continue protest at Qld centre 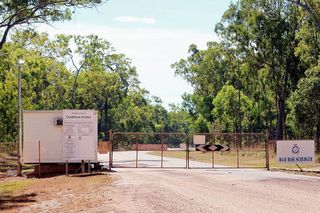 More people had joined the protest at the Scherger Immigration Detention Centre near Weipa, on Cape York Peninsula, raising the number from 50 earlier in the day.

A spokeswoman for the department said about 40 detainees had not eaten since Thursday and were taking “voluntary starvation action”, with their health being closely monitored.

Advertisement: Story continues below
They were in a common outdoor area and were holding a banner saying they were on a hunger strike.

The centre was calm and food and water were available, the spokeswoman said, and officials were continuing to negotiate with the detainees.

She said the well-being of the detainees was the primary concern of the department.

Asylum Seeker Resource Centre spokesman Pamela Curr said she visited the Scherger centre 10 days ago and the 575 detainees were depressed.

“They’ve been locked away up there, they have no visitors, there’s nothing to do, and these are men who’ve spent their whole lives working,” she told the ABC.

“Some men broke down when they said, ‘How can I eat when my children aren’t eating?'”

He said they were all originally from Afghanistan, and that the majority of them were Hazaras.

Mr Rintoul said the hunger strikers wanted to see all detainees who had been in detention for more than three months, whose health checks had been completed, released under the Community Detention Program.