You are at:Home»Refugees»Avoid Tampa disaster – refugee 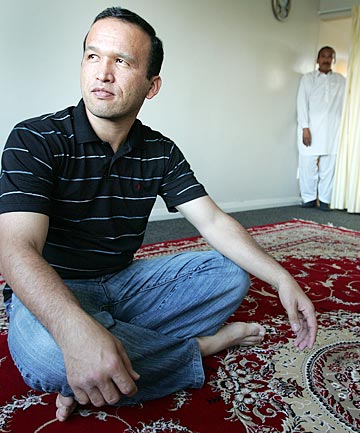 By Admin on July 14, 2011 0 Comments
RISKED LIFE: Mohammad Ali Amiri, left, was an asylum seeker on the Tampa in 2001./ CRAIG SIMCOX/The Dominion Post
Share this story A former Afghan asylum seeker says Australia’s treatment of the Tampa affair was a disaster, as the Refugee Council warns the Government against repeating those same mistakes.

The council says holes in current policy will lead to the same mistakes Australia has made with asylum seekers, namely using them to score political points, having no clear plan or rational debate and putting asylum seekers in fenced detention centres.

The council is to issue a policy paper today to be delivered to the Government next week.

Council spokesman Gary Poole said he had been disappointed with the politicisation of the incident. Rather than emotional political bickering, a cross-party plan was needed, the absence of which would be obvious when a boat did arrive, he said.

“Otherwise, we will be going down the same slippery slope that Australia has gone down. Australia has made some really bad mistakes, the kind we must avoid.”

From a humanitarian perspective, New Zealand had a good record but there were gaps in policy that would lead to problems, he said.

Mohammad Ali Amiri, now a citizen, was one of 438 Afghan asylum seekers rescued from a sinking fishing boat in the Indian Ocean by the cargo ship Tampa in 2001. He was accepted by New Zealand after the Australian Government denied him refugee status and detained him.

Mr Amiri, now living in Wellington with his family, said the Australian Navy arrested everyone at gunpoint. They were taken to Nauru and kept there for three years without knowing their fate.

“Lots of people got mental problems without knowing their future. It was hot like hell and nobody told us anything but wait, wait, wait. I was wishing one country would come and accept me, I would [have given]my life for that.”

Mr Amiri, 34, said he blamed the Australian Government for his treatment. He said governments needed to know that asylum seekers who had risked their lives to leave their home would always be loyal to the country that accepted them.

“So many live their lives in danger. We sit here with a warm bed and food and our families, but what about them?”

There is never any justification for holding an asylum seeker in a prison or correctional facility if they have committed no crime.

A community placement and low security accommodation option should be available. A pilot programme is needed for asylum seekers who have failed to get refugee status.

They should be case-managed, counselled, prepared, and given moderate assistance to return to their country of origin.

Asylum seekers need accommodation, medical care, legal assistance and the proper mechanisms in place for rapid processing of any asylum claims under international and domestic law.

A cross-party approach is needed to avoid the issue becoming a political hot potato.