You are at:Home»Human Rights»Discrimination»Murders of faith in a land of violence 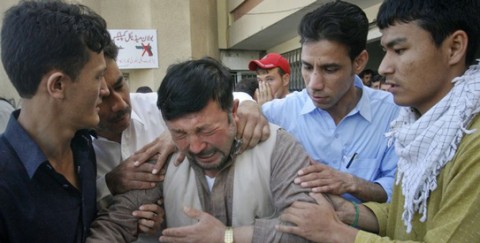 An ethnic Hazara man is comforted by community members, after he arrived to the local hospital in Quetta to find a family member shot dead, May 6, 2011. Suspected Islamist militants on Friday opened fire on a group of Pakistani Shi'ites in the southwestern town of Quetta, killing at least eight and wounding 15, police said. – Reuters Photo
Discrimination

Murders of faith in a land of violence

By Admin on July 1, 2011 0 Comments
An ethnic Hazara man is comforted by community members, after he arrived to the local hospital in Quetta to find a family member shot dead, May 6, 2011. Suspected Islamist militants on Friday opened fire on a group of Pakistani Shi'ites in the southwestern town of Quetta, killing at least eight and wounding 15, police said. – Reuters Photo
Share this story

An ethnic Hazara man is comforted by community members, after he arrived to the local hospital in Quetta to find a family member shot dead, May 6, 2011. Suspected Islamist militants on Friday opened fire on a group of Pakistani Shi'ites in the southwestern town of Quetta, killing at least eight and wounding 15, police said. – Reuters Photo

QUETTA: The hardcore sectarian outfits find the deteriorating security conditions in Balochistan, particularly in Quetta, conducive to target the Hazara-Shias. The violence against them is not ethnic but sect-based and confessions given to the police by Lashkar-i-Jhangvi cadres confirm this.

“It isn’t that the sectarian organisations are not targeting other Shias. We happen to be an easier target of their bullets because of our distinct Mongolian features,” Muhammad Asif, an ethnic Hazara, tells Dawn.

The Hazaras, divided between the Alamdar Road in the east and Hazara Town in the west of the city, feel cut-off and besieged in the wake of the violent attacks on them since the year 2000.

“It is curfew-like: we can move freely in our areas but not venture out,” Asif, a provincial government employee, says. “I do not follow a set routine, do not use official car and have to hide my whereabouts even from my colleagues to avoid a bullet from the extremists.”

These fears are for real, as is the urge for precautions. One of Asif’s senior colleagues, also an ethnic Hazara Shia, was shot down just outside his office building in 2009 on Sariab Road. He had disregarded advice from friends and had continued to follow a daily regime.

A number of ethnic Hazaras have been targeted on Sariab Road, which divides the city’s Baloch inhabitants from the rest of its population and which non-Baloch usually avoid ever since the start of target killing of the Punjabi and other settlers. Still no one even suggests the possibility of the involvement of Baloch insurgents in the killing of Hazaras.

“No, it cannot be them,” one Hazara resident of Alamdar Road says, refusing to give his name. “We are not settlers in the sense Punjabis are. We are not a demographic threat to the Baloch population in the way other settlers are. We have been living here for over a century.”

Home department officials also insist the Hazaras are targeted because of their faith and not because of their ethnicity. In most, if not all, incidents of sectarian violence in the capital of Balochistan officials and the Hazara community suspect the involvement of the Lashkar-i-Jhangvi ‘supported by the Taliban living in the province’.

“I myself heard a Taliban leader from Pishin instigating his followers to kill the Hazaras,” says the anonymous Alamdar Road resident, adding this was proof enough for him. The LJ claims in which it has accepted the responsibility of almost all attacks on Hazaras and the confessions of some of its activists arrested in the past more or less clinch the issue.

Ethnic Hazaras had migrated from Hazarajat in central highlands of Afghanistan more than 100 years ago to escape religious persecution of its rulers. They settled in Quetta as soldiers in the colonial army. They have been the target of religious violence since mid-1980s. But the attacks on them began to intensify in 2000, the year one of their top leaders, Sardar Nisar Ali Hazara, was gunned down in Quetta.

Ever since, the extremists have targeted them repeatedly and with increasing severity. In May this year 14 ethnic Hazaras were killed in two separate gun-and-bomb attacks in Hazara Town. In June a Hazara policeman was shot down only two days before Olympian boxer Syed Abrar Hussain, who was also director general of the Pakistan Sports Board in Quetta, was shot dead near Ayub Stadium in the heart of the city.

“We have lost more than 500 people in sectarian attacks on our community (in the last 10 years or so). Every ethnic Hazara family has been affected, directly or indirectly, by the violence against them. Everybody has lost a relative or a friend or a neighbour,” says Mirza Azad of the Tanzeem Nasle-Nau Hazara.

“Our playgrounds are being raided, our homes and mosques are under fire and our religious processions are being attacked by religious extremists,” he says. “The authorities have done nothing to protect us from them. Not a single case in which a Hazara was killed has been solved.”

Hazara Democratic Party’s Abdul Khaliq Hazara claims his party had informed the provincial home department and the office of the IG police on March 3 that religious extremists supported by the Taliban were planning to carry out attacks against the ethnic Hazaras. “No action was taken by either the home department or the police,” he says and points out that “all the Hazara killings during May and June” had taken place only a small distance from the security checkposts.

Officials concede the government has so far been unsuccessful in checking the ongoing violence against the ethnic Hazaras.

The Hazaras are also not happy with the politicians for their failure to stand by them against religious hatred. “Not a single politician was seen at the funeral of Abrar. Now it could be that they are afraid of taking a position against religious violence and hatred,” Azad asks.

He also complains about the ‘silence’ of media on the Hazara killings. “Isn’t it amazing that the entire electronic media chooses to discuss the Shahid Afridi-PCB row for several days but not a single word is said when Abrar is gunned down,” Azad says as he links the Hazara killings to the “Talibanisation of our society”.

He recounts several instances in which Hazara businessmen were abducted and released only after payment of substantial ransom. “Many of them have wound up their business, sold their property and left the country for good.”

For those who can manage it, escaping the country is the only option for as Muhammad Asif says: “We are not like other settlers who can go back to Punjab or Karachi or Abbottabad to their relatives or communities. If we want to leave Quetta we will have to quit this country. It is just that not all of us can use this option.”