Stopping boats has appeal on the queue

by Tom Allard BEFORE he has even uttered a word, Rajab’s hands are covering his eyes and he is weeping. His chest heaves as he sobs, the humiliation... BEFORE he has even uttered a word, Rajab’s hands are covering his eyes and he is weeping. His chest heaves as he sobs, the humiliation and misery of his life powerfully articulated by his shaking body.
Rajab’s distress has been prompted by a simple question. How long have you been a refugee? 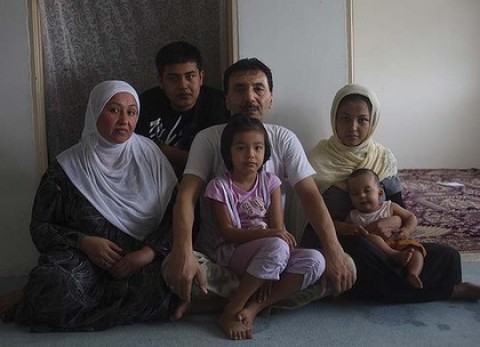 After composing himself, he answers. ”It’s been more than 30 years that I have been a refugee. Really, it is my whole life as a refugee. I married my wife as a refugee and she was a refugee. My kids are refugees and my grandchildren are, too. This is the life for us.”

Advertisement: Story continues below The ethnic Hazara is sitting on the floor of his simple apartment in the Ampang district of Kuala Lumpur.

The floor is covered with tatty carpets and the walls are bare except for a photograph of Rajab’s home town, Bamiyan in Afghanistan, which he left in the late 1970s for Iran in the midst of a bout of ethnic cleansing that left his parents dead.

Rajab bears no ill will to those who take boats to Australia. He knows families who have done just that, and he would do it himself if he had the money and the opportunity.

But he would be happy if the Australian government stopped the boats, if it meant more places were opened up for long-term refugees like him and his family.

”Everybody has their own perspective,” he says. ”If you take people from the boats, that means other people will not be accepted … shut the door completely and you will discourage these people and encourage more people through the UNHCR.

”There are people who are taking boats who are five or 10 years a refugee. I doubt any have been refugees for 30 years like me.”

By taking 4000 refugees from Malaysia over four years in exchange for returning 800 asylum seekers who attempt to arrive by boat, the Malaysia plan increases Australia’s quota from about 13,770 to 14,770 a year.

But the refugee intake is miserly by world standards, ranking Australia at 46th.

Moreover, the increase will make only a tiny contribution to the fundamental dilemma that creates a market for people smugglers targeting countries with more humane immigration policies.

There are 11.5 million refugees in the care of the United Nations High Commissioner for Refugees, but less than 100,000 can expect to be resettled in a third country in any year. An astonishing 7.2 million refugees are considered be in a ”protracted situation”, still waiting after five years or more.

The world’s rich countries host just 20 per cent of refugees. There are almost 2 million in Pakistan and 1 million in each of Syria and Iran.

Last week the opposition’s immigration spokesman, Scott Morrison, suggested that a swap deal could be done with Iran, rather than Malaysia, citing that it was a signatory to the UN refugee convention.

But Rajab and his family attest that life for refugees in Iran is miserable, and signing the convention that is supposed to protect refugee rights does not necessarily mean a thing.

He came to Malaysia three years ago because flights were cheap, Iranian immigration officials gave them a passport for a bribe and they could get a visa on arrival. ”Life is a little better in Malaysia,” he says. ”[But] the only advantage is we have the UNHCR card.”

The card gives holders the right to live freely in the community, although refugees are often thrown in detention after being caught in the regular raids targeting an estimated 2 million illegal workers in Malaysia. Usually the UNHCR gets them out quickly.

Even so, Rajab must work illegally, putting in a 12-hour shift at a restaurant six days a week and earning $250 a month, barely enough for the rent.

In Malaysia three or four refugee families are often jammed into one apartment and, while most children go to schools organised by the community and funded by charities and the UNHCR, it’s a precarious existence.
Just what additional support for refugees flows from any deal between Malaysia and Australia remains to be seen. Advocates here say any benefits must be offered to all 90,000 refugees in Malaysia, not just the 800 who are sent from Australia.

For Rajab and his family, like all other refugees, what they want most of all is the chance for resettlement, and for countries like Australia to take more refugees.
”All I want is a place where my grandchildren can go to a proper school,” he says. ”I dream of a place to stay that’s mine, and a little garden to look after.”