As usual, all the hot news about Afghanistan breaks by my Facebook friends – way sooner than the big media like BBC Persian, TOLO, or newspapers or even bloggers. This time it is the sad news of Jawad Zahhak’s death. He was the head of Bamiyan Provincial Council and was kidnapped on June 3, 2011 on his way from Kabul to Bamiyan in Ghorband valley, Parwan, by a group of armed men who called themselves Taliban.

However, Sarwar Jawadi an ex MP from Bamiyan has said in his blog that the abductors were “from local people”. A team of local elders and officials tried to negotiate with this group, but apparently had no success. The people of Bamiyan also signed and sent a 10 meter long petition to Parwan’s Ulema Council and Provincial Council, in order to put pressure on key players in Parwan, but they failed to achieve anything as well. 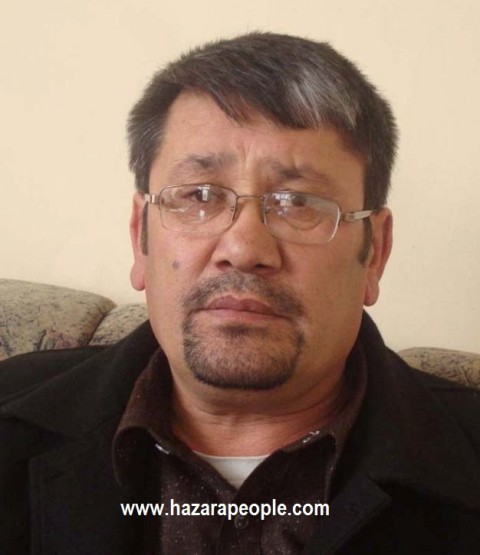 Zahhak was the most loved public figure in his hometown Bamiyan. The reason was his uncompromising efforts in supporting his people, his sharp critique of uneven development policies pursued by the government and the international community and most importantly his exemplary sense of humor and friendly attitudes. All the Bamiyanis have a couple of funny stories about things Zahhak said and did during his long career as a fighter for Hazara rights.

Zahhak was a close aide and personal bodyguard of Abdul-Ali Mazari in 1990s and once was injured in protecting the Hazara leader. He then worked in various positions in Bamiyan and kept his affiliation with Wahdat Party, Muhaqiq branch, though always remained critical of how the Party was distancing from its mandate which is protecting the interest of Hazaras in the jungle we know as Afghan politics. He was elected for two terms as a member of Bamiyan Provincial Council, and stayed honest with and accountable to his people while most of those with a little power in the government are involved with corruption.

I came to know him through his innovative way of protest and organizing rallies in Bamiyan. Due to his efforts, Bamiyan, although being a tiny provincial town, has the most coherent and lively civil society in the country. One of his initiatives in April 2009 was to pave part of a Bamiyan street with cob (Kaahgel), in protest to government’s exclusion of Bamiyan from development plans. It was a unique and humorous way of protesting which is totally novel in Afghan politics. Two other public protest rallies were organized in Bamiyan this year, one was the installation a large replica of a gas lamp on a square to protest the lack of electricity in the province, the second was granting a certificate of service to a donkey in a special ceremony as acknowledging that this animal has done more than the Karzai government to the people of Bamiyan.

… Now Zahhak is gone, he is not there to organize gatherings, tell jokes or criticize the shameless ministers who frequently land in Bamiyan for pleasure but pretend to be there for business. But he died as a hero, as someone who truly served his people and gave his life for his firm beliefs in peace, non-violent protest, democracy and social justice.

His death also reminds us about an emerging reality in the past couple of months: that Hazarajat is being surrounded by so called Taliban group. In the past 5 years the Bamiyan road to Kabul through Wardak was practically closed because the “Taliban” used to kill anybody who looked like a Hazara, the only safe road was through the Tajik-dominated Parwan province in north of Kabul which is now proved to be unsafe in recent months.

I am really sad and sick of all this, I am sad because of the situations in which the Hazaras find themselves, and sick of the hypocrisy that exists in the Afghan government and international community who are not willing to talk about these issues. In short, I think for the ordinary Afghans, the idea of Taliban continues to fade out and the current conflict is starting to emerge as an ethnic war. Which is not a good thing for so many reasons.