You are at:Home»Refugees»Australia»The waiting game gets tougher as asylum seeker hopes dealt a blow 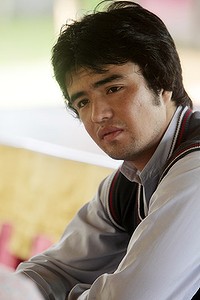 Javid Zanidi: "I know so many people who have made it to Australia…It’s a good life for them. They have everything."
Australia

By Admin on May 21, 2011 3 Comments
Javid Zanidi: "I know so many people who have made it to Australia…It’s a good life for them. They have everything."
Share this story

JAVID Zanidi speaks in a weary voice that belies his youth but tells much about a harrowing life and two years of intense frustration in Indonesia.

Javid Zanidi: "I know so many people who have made it to Australia…It’s a good life for them. They have everything."

”Yes, I heard about this new rule,” the 17-year-old Afghan asylum seeker said when asked about the Gillard government’s proposal to send him to Malaysia if he tries again to make it to Australia by boat.
”Last weekend one friend came back from the internet cafe when he heard the news and told us. Nobody wants to take [a]boat now because they will be sent back.”

It was the same story from all asylum seekers contacted by The Saturday Age in Puncak, a hilly area dotted with crumbling villas and hostels where Jakartans flock on weekends and many asylum seekers bide their time waiting for a people smuggler.

”The news spread quickly,” said Muhammad Bagir, another asylum seeker. ”Every time I think of it I am crying. We just stay here now waiting for the UNHCR [United Nations High Commissioner for Refugees]. Many years … very difficult life”

For an Australian government hoping that its new refugee swap deal with Malaysia will break the people smugglers’ business model, it’s just the response it was looking for.

Three boats carrying 107 asylum seekers have made it to Australia in the fortnight since Prime Minister Julia Gillard announced the deal. But, explains Javid, it’s unlikely these people would have heard of the change.
It’s also true that Malaysia’s insistence, revealed on Thursday, that it will take only those who arrive in Australia after the deal is finalised, probably by the end of the month, may prompt a late rush of boats.
But, if the survey of asylum seekers in Puncak is any guide, the longer-term outcome of the policy is likely to slow the arrival of boats dramatically, at least until the quota of 800 asylum seekers that Malaysia has promised to take is filled.

For Javid, the rule change is just the latest in a run of bad news. An ethnic Hazara and an eldest son, Javid was the one his family had relied on to drag them out of poverty. He was sent to Kabul to study at a good school but was regularly harassed by Taliban, who hate the Hazara for their Asian features and Shiite Islam.
”They caught me in Kabul and sent me back to my village Jaghuri,” he said. ”They said if we see you on the road to Kabul again, we will kill you.”

He followed a familiar trail, first to Pakistan, where he was contacted by an ”agent” offering a false passport and passage to Australia via Malaysia and Indonesia for $US4000.

Javid, who has been assessed as a genuine refugee, was arrested in Indonesia as he made his way to meet his boat in West Java. He spent nine months in detention and more than a year in a crowded villa where 26 under-age asylum seekers live.

This week, Javid heard that his application to the Australian embassy in Jakarta for asylum had been rejected. ”They didn’t tell me why,” he laments.

”I know so many people who have made it to Australia. They are in Sydney and Brisbane. It’s a good life for them. They have everything, we have nothing here.”

Javid knows it is likely to be years before a country agrees to resettle him.
He hasn’t worked up the courage to tell his family that the embassy has rejected him.
”We have this saying in Afghanistan: time is gold. But, here, time is nothing. Just eating and sleeping.”